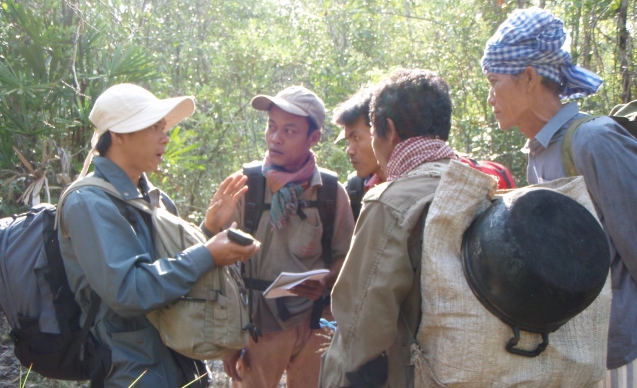 Chamnan is a member of the Cambodian Turtle Conservation Team which has received three CLP awards since 2004. Although he wasn't in the initial Future Conservationist project, he has been an integral part of the Follow-up and Conservation Leadership award-winning teams. These projects have taken place inside and around the protected forests of the central Cardamom Mountains where chelonian (turtles, tortoises and terrapins) face serious threats due to poaching for food, and for trade to Vietnam and China.

The turtle is a symbolic animal in Asian culture and the Royal Turtle (Batagur baska) is one of seven national symbols of the Kingdom of Cambodia. However, until relatively recently, there was little information available about the number of species, their distribution, diet, or habitat preferences in Cambodia.

As part of the Follow-up project, Chamnan continued the surveying work of the first project and he also carried out educational activities  a prerequisite of any Follow-up award. The team was fortunate to attend a training course in Vietnam where they picked up many good ideas for classroom activities such as a board game which they brought back to Cambodia and had translated into Khmer. The board game was used during three lessons and was a really fun and useful tool to teach students about a turtle´s lifecycle and the threats they face. For example, if you cut down a forest, a turtle might lose its habitat.

As part of the Conservation Leadership award, he helped teach basic conservation skills to students and local community members so that they could differentiate between species of turtles and identify which ones were classified as Endangered and Critically Endangered on the IUCN Red List. Following an unfortunate incident, the list of stakeholders taught by Chamnan grew and he and the team began instructing park rangers too. 

'The rangers confiscated an elongated tortoise but, rather than release it on land, they thought it should be released into the water! After that we conducted training with the rangers too so that they could identify species and learn how to release them properly!'

The Cambodian Turtle Conservation Team received attention from the international media in 2007 when they encountered a 11kg (24.2 pound) female Cantor's giant soft-shell turtle (Pelochelys cantorii) whilst surveying Cambodia´s Mekong River. Cantor's giant soft-shell turtle is one of the world´s largest and least studied freshwater turtles, and it had not been seen in the wild since 2003.

Although this rare turtle is listed as endangered it is likely that fishermen opportunistically steal their eggs - especially if they see the tell-tale sign of a turtle´s tracks leading from the water´s edge to a nest. To help combat the harvesting of eggs Chamnan and his colleagues, together with conservationists from Conservation International (CI) and WWF began piloting a new way of protecting the eggs.

'If a fisherman finds a nest, he calls us and then we check on the eggs and pay him $3 for the find. Then we hire the fisherman to guard the nest and protect it from threats such as trampling by buffalo. We pay the fisherman a reward for each turtle that hatches successfully.'  says Chamnan. 

This project appears to be working. In the first year only three nests were protected, but this year twelve nests have been protected and CI has released a total of 200 hatchlings into the wild.

'I think if there is no incentive then it's quite hard to persuade the fishermen [to stop taking eggs].' says Chamnan about the payment scheme.

Chamnan's dedication to chelonian conservation is paying off for him too. In 2009 he was employed as a full time member of CI staff. David Emmett, Regional Director of CI's Indo-Burma East and Southeast Asia Field Division is delighted with the team's work. 

'[They have] leveraged funding from CEPF for continuation of their work in partnership with Cleveland Metropark Zoo. It's very exciting. They have also raised [funds] from USFWS and from the Turtle Survival Fund for their projects. It is a real success. This is indeed a great achievement for this team which commenced several years a go as a student project.

'In a country like Cambodia, which has much need for capacity building, it is great to hear that the team is committed to training the current batch of young student conservationists. Our group is supporting two students who are studying Wildlife Conservation at the Royal University of Phnom Penn,' says Chamnan. 'We lend them equipment, help them reach their study site, help them identify suitable turtle habitats'

The ability to help and mentor up-and-coming conservationists is an excellent quality for future conservation leaders to have. We wish Chamnan every success in raising many more batches of turtle hatchlings and supporting more young conservationists to develop their careers in Cambodia.

In a country like Cambodia, which has much need for capacity building, it is great to hear that the team is committed to training the current batch of young student conservationists.  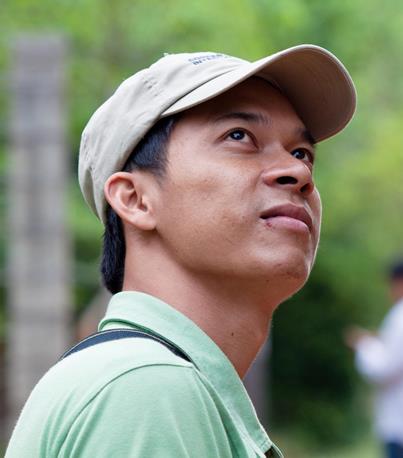