Home > Our Impact > Success Stories > Interviews > At one with Nature

At one with Nature 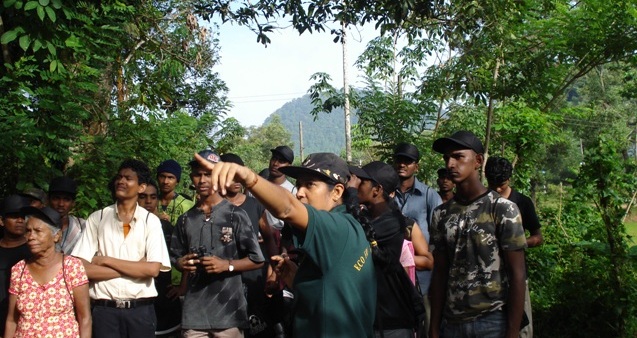 Kanchana first came across the CLP in 1997 when her undergraduate supervisor recommended her as the local counterpart to a team of UK students who travelled to Sri Lanka to conduct a CLP-funded project. The team carried out the first ever bird surveys of three wet-zone forest patches around the Sinharaja Reserve in southern Sri Lanka.

'This was a life-changing experience for Kanchana. The Cambridge expedition team became like my extended family! They helped me improve my English and later recommended that I complete a degree from Colombo University and attend an Endangered Species Management course at Durrell in Jersey.'

This was an incredible time for Kanchana and she made the most of every networking opportunity. In recognition of her sparkling personality and natural communication skills, she was invited to be Master of Ceremonies at the CLP's 10th Anniversary awards ceremony where the guest of honour was Queen Noor of Jordan. That evening, Kanchana was introduced to Edward Whitley who invited her to a meeting the next day.

'I had read his book Gerald Durrell's Army whilst I studied at Durrell! He suggested that I try and start my own NGO in Sri Lanka.' Subsequently, upon winning a Rufford Small Grant in 2001, this is exactly what Kanchana did and so Eco-Friendly Volunteers was born.

In 2003, Kanchana led her own CLP-funded Future Conservationists project focusing on conducting the first systematic study of the spot-billed pelican in Sri Lanka and awareness-raising. One project activity involved cleaning up plastic bags from Peak Wilderness Sanctuary, a sacred site which hosts 2 million pilgrims every year. In addition to children, students and local communities, ECO-V also called upon the voluntary services of 200 soldiers from the Sri Lankan army! Kanchana recalls:

'I went up to a big man in one particular camp and said "sir, please help us! We want to clean this garbage but we can't do that on our own. If you can provide the soldiers we can do shramadana (shared work)." The soldiers and other volunteers toiled in the heavy rain for 6 hours and collected over 3,000 kg of plastic bags and wrappers!'

A short video of this endeavour was shown to the Environment Minister in a bid to gain his support, and he was suitably impressed. The next year a parliamentary bill was passed banning non-biodegradable plastic bags from the site. Showing true entrepreneurial spirit, Kanchana requested damaged goods and off-cuts from local clothes shops which were made into stylish fabric bags by a local women's group.

After winning three Whitley Fund for Nature Awards, Kanchana won a CLP Follow-up award in 2008 which focused on the conservation of spot-billed pelicans and their habitats which are lake-size freshwater tanks. Kanchana's team was also awarded the Kate Stokes Memorial Award to train 20 young volunteers who had no prior conservation experience. The award and training were crucial to Kanchana's vision of young people having an affinity with Mother Earth and she described the training as one of the most important events in ECO-V's history.

As a mother of two children, Kanchana understands the importance of educating the next generation and she has taken this a step further by spending time with pregnant mothers and playing natural sounds to their unborn babies to make them aware of what's going on outside the womb.

'Mothers have reported back, saying that once born, their babies are much more alert in the natural world' says Kanchana. 'It also helps pass on the conservation message to doctors, nurses and midwives.'

Nine years of hard work is paying off and the success of Kanchana's work is evident. Even though they may not remember her name, and call her 'Pelican Miss', everyone recognizes the pelican.

In early 2010 Kanchana and her family flew their nest in Sri Lanka to spend a year in Australia.

'I am getting more experience as a volunteer and enjoying watching birds and fascinated to see laughing kookaburras, cockatoos and many lorikeets and parrots.' But she will return to ECO-V in 2011 to celebrate the NGOs 10th anniversary and to fulfil her long-term goal of establishing a permanent conservation training centre.

In the meantime, Kanchana has a simple message which is appropriate to all of us:

'Conservationists need to think about the resources they use. So, in addition to your important biodiversity conservation work, don't forget the simple things such as recycling and reusing items, and turning off the light when you leave a room and turning off the tap while you are brushing your teeth. It all makes a difference!' 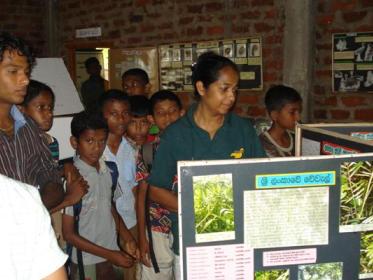