Steppes to success in Central Kazakhstan

Vera Voronova is the CEO of the Association for the Conservation of Biodiversity of Kazakhstan (ACBK). Having started out as a student member of the ACBK board in 2009, she went on to become the CEO just six years later. Vera won a CLP Future Conservationist Award in 2011 to assess the impact of electricity powerlines on birds in the Central Kazakhstan Steppes. The project was so important that its results are still being used to inform conservation efforts today. We recently caught up with Vera to uncover the story behind her success and her dreams for the future of conservation. 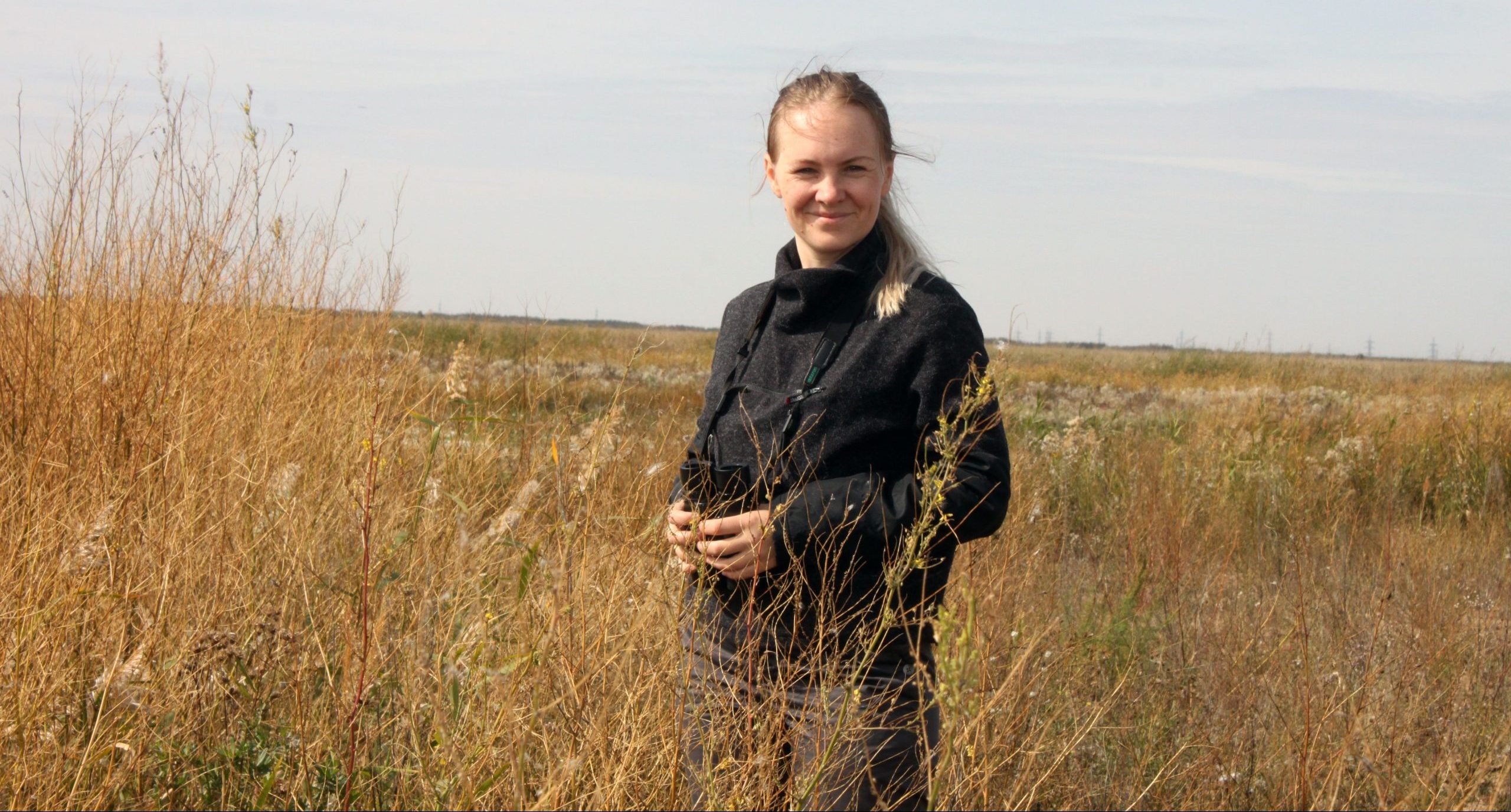 What motivated you to work in conservation?

It was very natural for me to work in conservation. As a child growing up in a small village in the vast steppes of Central Kazakhstan, I was always trying to save something, like the mice our cats caught at home and poor frozen birds I found after a snowstorm (I really thought I could warm them up and bring them back to life). When I was very little, I even tried to save snowflakes from melting by shaking them off my clothes before we went in the house!

From this early age, my mum noticed I enjoyed biology and being outdoors with my father, so she really helped me to pursue these interests. Now as an adult, I find that working in conservation really suits my personality; I’m a very social person, and it’s really important to me to be useful to society by saving nature.

What is your proudest achievement from your CLP project?

When I started my CLP project in 2011, the mortality of birds on electricity powerlines in Central Kazakhstan was a little-known issue in the country at the time, especially in the central region where there are only steppes and no trees. The powerlines were being used by the birds as “trees”, but very few ornithologists knew how safe they were or how they were affecting the birds.

During May to September 2011, we spent a total of about 60 days in the field, covered 680 kilometres and looked at five different types of powerlines. This is still a record for such research in Kazakhstan. We found over 1,000 bird remains comprising around 40 species, and most of them were birds of prey and corvids. About 90% had been victims of electrocution on the power lines. I’m really proud of this research because it was really important to understand how the different power lines were affecting birds in this region. There haven’t been any other projects like this since then. It’s already nine years later but we still use the data we collected from my CLP project. 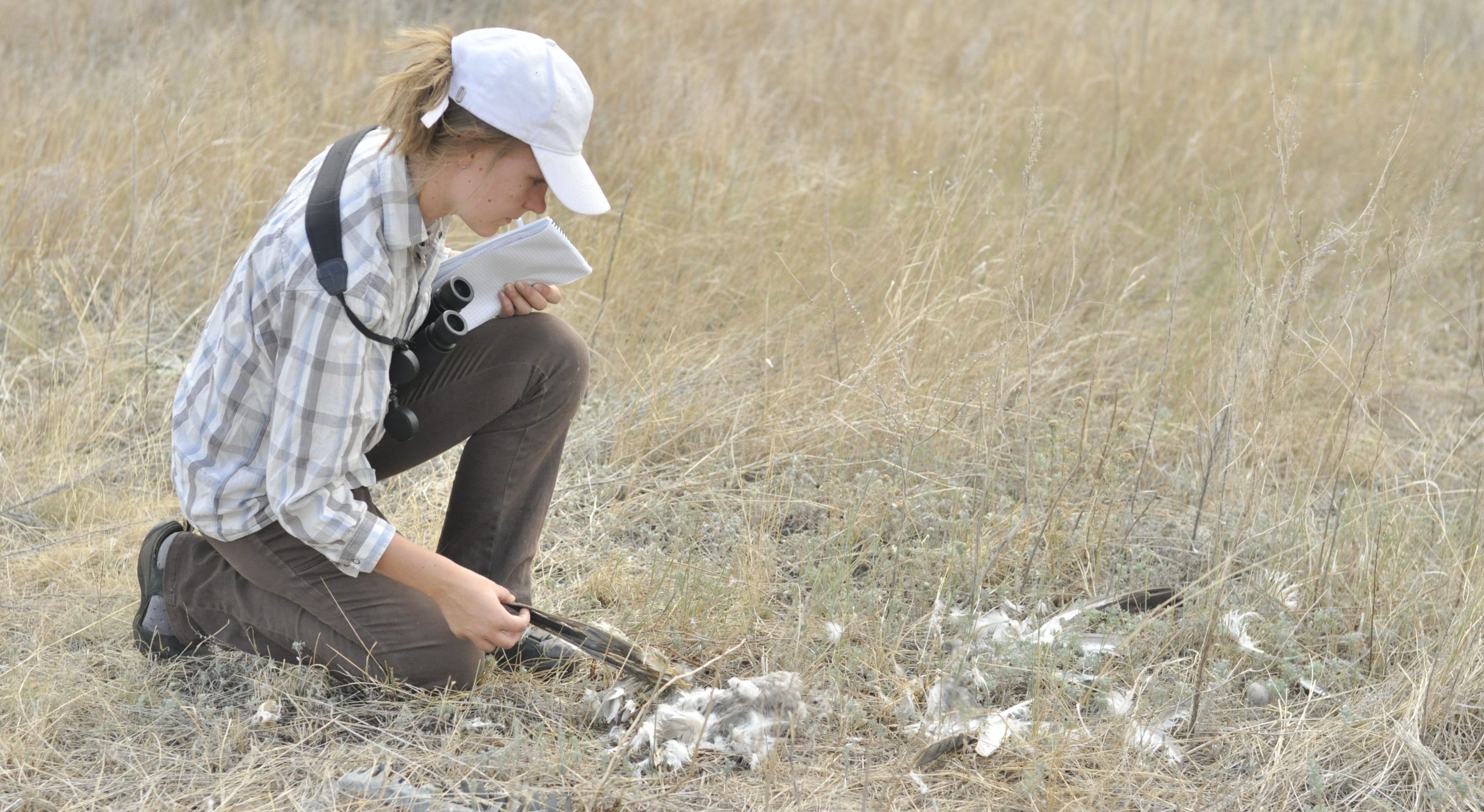 Why do you think your CLP project was such a success?

If you could do your CLP project again, would you do anything differently?

If I could do the project again today, I would use the opportunity to tell as many people as possible about the problem. In our country, if you don’t make a noise, you cannot solve serious conservation issues. Even after nine years, we still cannot solve the issue we uncovered in our project.

So, with the benefit of hindsight, I should have made a lot more noise about the results we found. I should have met with senior staff who control legislation. But I was young, it was one of the first projects I had managed, and perhaps I didn’t expect to find so many birds or generate such important results.

How did you end up becoming the CEO of ACBK?

I always smile when I think back to the time I first became involved with ACBK 11 years ago. I was studying for my Masters in Natural Sciences and was a member of my University’s Nature Club, which was run by ACBK. At the time, the majority of ACBK members were students, and the board wanted a student representative. In the end, I was elected to the board of ACBK, and I was only 22!

I was on the board for six years, and for the last three years I was chair of the board. This was an amazing experience because, during this time, ACBK really improved its governance and I could be deeply inside this process. I became the CEO in 2015, and since then I’ve been able to continue developing the organisation, including our internal management system and strategic vision.

What’s it like being the CEO of a conservation organisation?

It’s really exciting! At the start of my career, I was interested in many different things, including ecological tourism and scientific research, so it was really hard for me to decide which of these interests to pursue. Now, every day I can be in touch with many different aspects related to the management of ACBK and our various conservation projects, so the role really satisfies my curious, social character.

ACBK is only 16 years old and we are still in a development stage. Last year, we came up with a new strategy so we are currently moving in a new direction. One of my key responsibilities at the moment is to help the team move in this new direction and strengthen the existing directions we have. As the only full BirdLife Partner in Central Asia, we also see ourselves playing a role in expanding the work we do in collaboration with neighbouring countries. 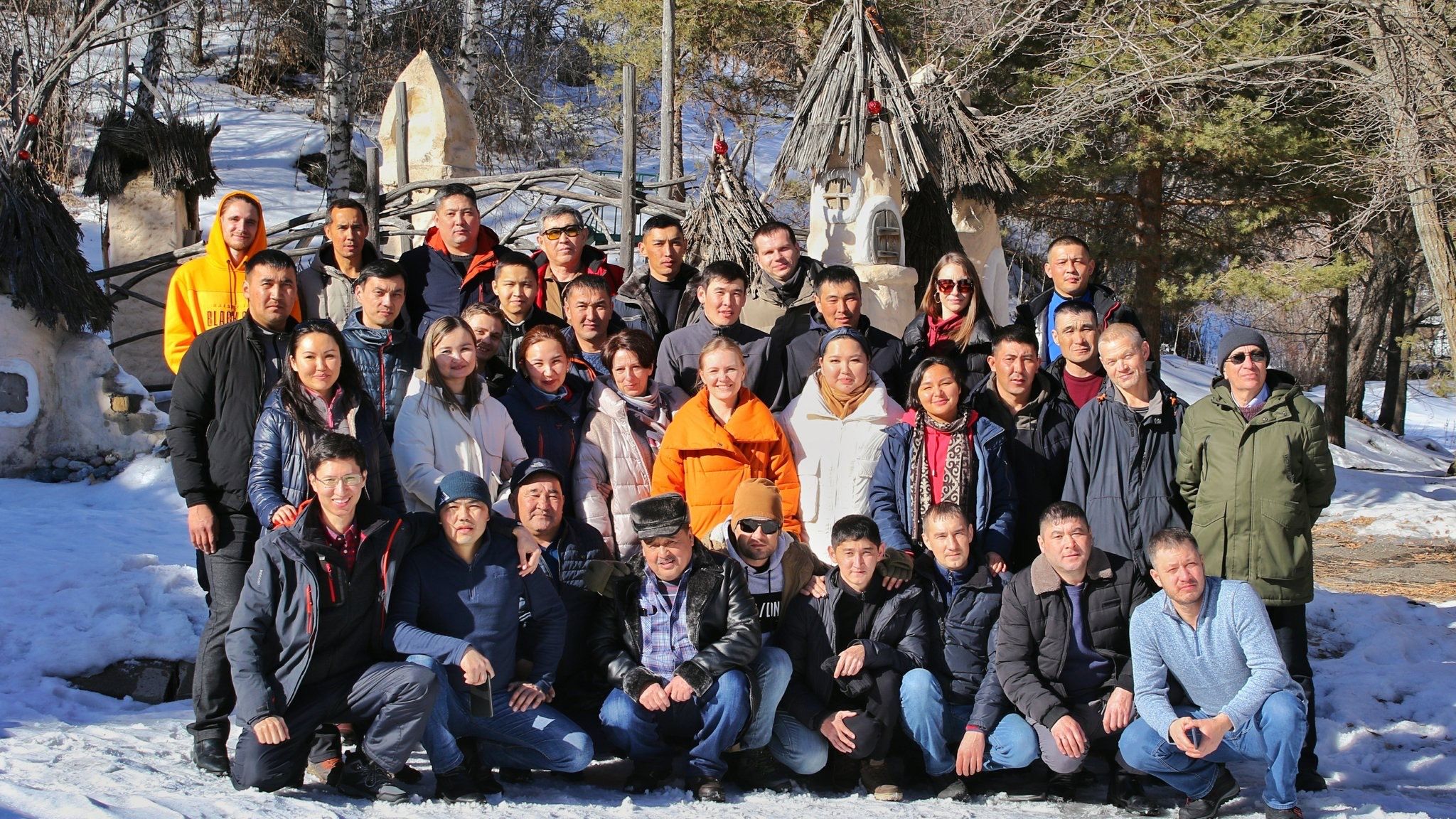 The ACBK staff, with Vera Voronova in the centre (in the orange coat) © Renat Eskazyuly

Are you currently facing any difficulties?

Conservation is not a very popular profession in Kazakhstan, so it can be very hard to find really motivated professional experts in our field. The situation is getting better though, as students are going abroad to study in Europe and the US and then coming back to help solve conservation issues in Kazakhstan.

We also find it difficult to engage people in our work and spread our messages to society more broadly. The government here doesn’t have a very strong policy for wildlife conservation, so it can be challenging to lobby for change.

For example, I was recently involved in the global community discussion about the post-2020 biodiversity framework as part of the Convention on Biological Diversity (CBD). But, despite being the ninth-largest country in the world, Kazakhstan doesn’t yet have a biodiversity strategy in line with CBD. Without an existing strategy, it’s extremely difficult to come up with a new one.

How did you benefit from the CLP training course you attended in 2011?

The CLP international [Conservation Management & Leadership] course in Canada was the best of the best training that I ever attended. I keep saying this because it’s really true! If I close my eyes now and imagine the CLP training module on Advocacy, I really remember what they said to us. All the knowledge that I learned from the course has just stuck in my brain and I’m always referring back to it even now, nine years later.

The courses I’d been to in Kazakhstan were usually about how to conduct research, but not about project management, so the CLP training really filled that gap in knowledge for me. We learned the theory in the course, and we could then put it into practice in our projects.

How has being part of the CLP Alumni Network made a difference to you?

CLP came to me at the right moment. I previously worked in an ecological tourism agency, but after a few years I realized the agency was more focused on tourism than on ecology. This was the moment I realised I wanted to change my focus to conservation. At the same time, CLP announced the call for applications and my good friend suggested I apply. It was the first independent project I led and designed (with the help of my colleagues) – so it was really the first step in my career as a conservationist. Having that connection with other young conservationists helped me realise I’m not alone in my work, which really motivated me.

What advice would you give to conservationists just starting out in their career?

When you’re young, you have a lot of time and energy, so it’s really important to seize this opportunity to get involved in many different things. It will help you find your path in life. You never know what might happen! Be curious, find out what you like and what you don’t like, and go from there.

What are your future plans?

I don’t have any specific ambitions; it’s just really important for me to be useful for society. Although I still have a dream to continue my research on penduline tits, which I studied in my undergraduate and masters research. They are fascinating birds, and there is still some confusion about their taxonomy, so I would really love to pursue a PhD project on them one day.

In the future, I really hope that the majority of people – not just conservationists – will start to understand our connection to nature. I think that the pandemic and the current situation we find ourselves in is naturally pushing people towards this understanding. I’m hopeful that this will change the focus of everything we do in our daily lives, so we can influence global policies to effect lasting change.

Seize the opportunity to get involved in many different things; it will help you find your path in life. 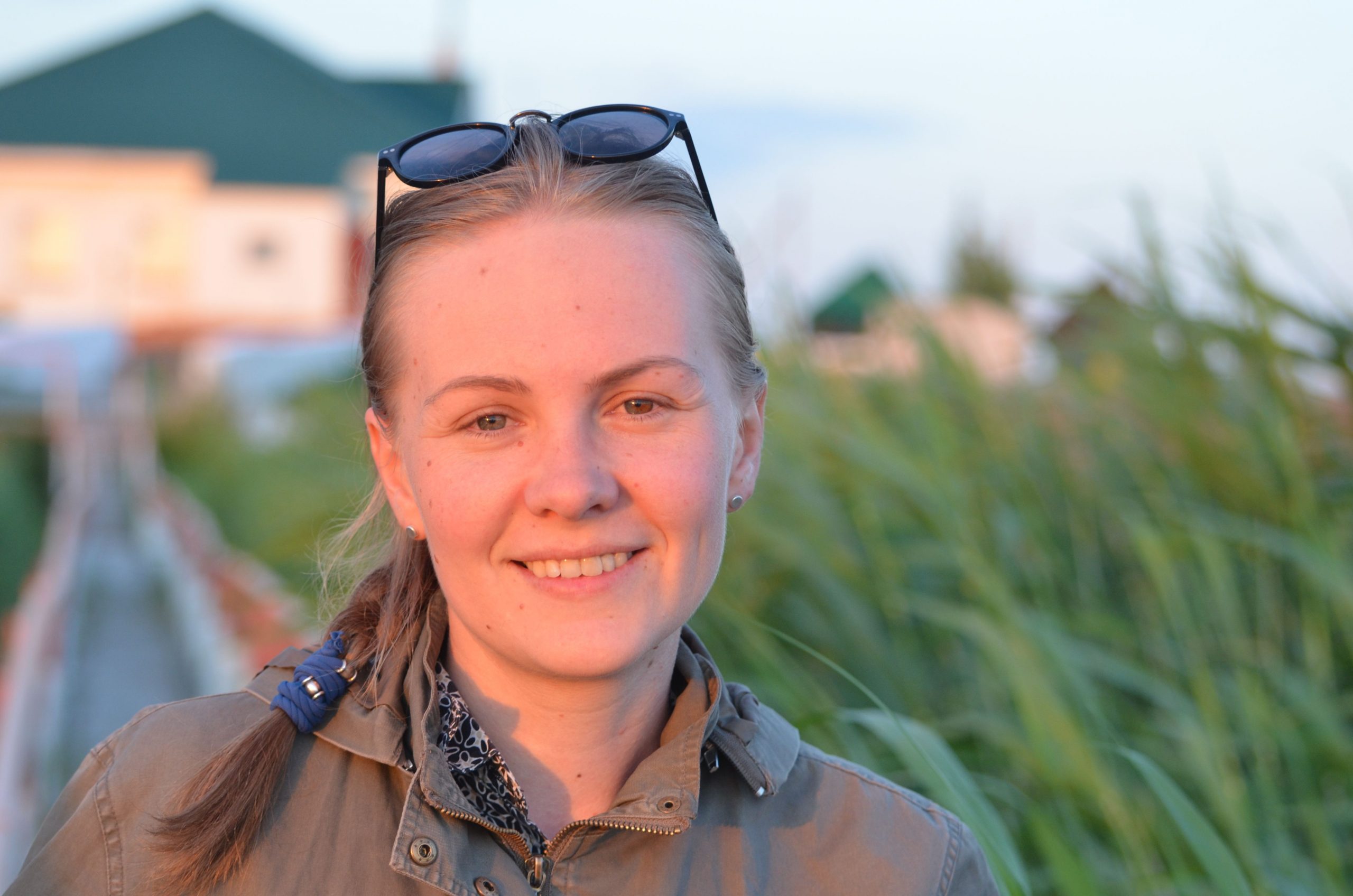