The black softshell turtle was thought to be extinct in the wild, only being known from a sacred pond at the Bostami shrine in Bangladesh. Recent records from Nagaland, West Bengal and other locations along the Brahmaputra River drainage in Assam warrant intensive field investigations for this elusive species. Traditionally hunted for meat and cartilage, these recent sightings indicate the presence of fragmented populations, though the number of adult individuals may be dangerously low. Considering recent records and anecdotal information received in our recent pilot surveys, we propose species distribution modelling including historical records, secondary information and ethnic knowledge along potential habitats. Few temples still house sizeable populations. The species has little chance of recovery, unless supplemented with sustained conservation initiatives. We propose a conservation action plan for safeguarding and reproducing the temple turtle populations. Additionally, we will conduct health assessments in two temple ponds while changing the attitudes of temple authorities through sustained awareness initiatives. The project further aims to address awareness activities to identified stakeholders as active fishermen to strengthen conservation work in the region. Moreover, we aim to prepare a white paper to be circulated among government departments as guidelines to improve husbandry of captive turtle populations in temple ponds throughout Assam. 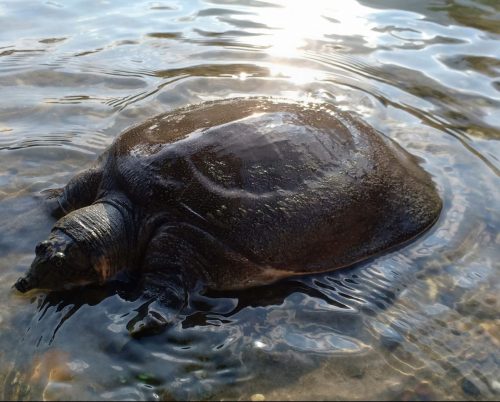