Status surveys of focal species in the Magdalena Medio, Colombia

The Magdalena Medio, part of the Magdalena-Urabá moist forest ecoregion, is one of the most critically endangered regions in Colombia and is undergoing rapid conversion to oil palm plantations. Data collected since 2012 indicates the presence of keystone species of animals in the Magdalena Medio but their distribution and ecology remain unknown, inhibiting conservation in plantation landscapes. We will concentrate survey efforts in the eastern lowlands of the Serranía San Lucas, an Important Bird Area and a site of urgent conservation priority. Employing a focal species approach, we will conduct status surveys on four species of conservation concern: Blue-billed currasow (Crax alberti), Giant Anteater (Myrmecophaga tridactyla), Brocket deer (Mazama americana) and Jaguar (Panthera onca). Using an "adaptive cluster" sampling scheme, we will survey all cells bordering those in which we previously recorded species presence until the cluster is surrounded by cells where the species goes undetected. As a result of these activities we will be able to identify the most critical sites for the survival of each focal species and implement plans with local communities for their conservation including the preservation of key habitats in the plantations. 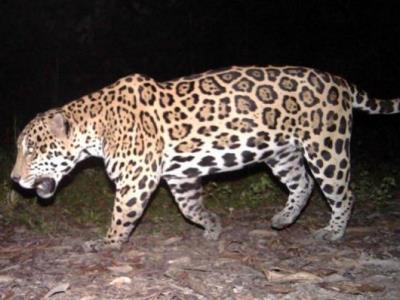