Gharial conservation in India: a research, outreach, and training program

The gharial (Gavialis gangeticus) is a critically endangered crocodilian existing only in India and Nepal. India’s Katerniaghat Wildlife Sanctuary contains a breeding population vital to the survival of the species. However this population is threatened by a combination of natural and anthropogenic causes. Through gharial population research, habitat assessment, and outreach to local communities this project aims to provide a basis for long-term conservation of gharials in this region in cooperation with local communities. This project will also produce a training film on gharials and research/survey methods to facilitate replication of similar gharial research and conservation programs across gharial range areas. 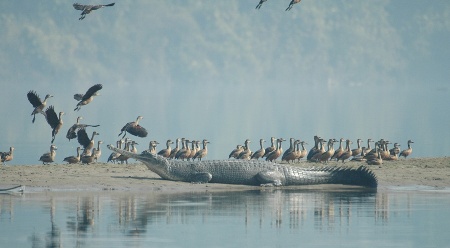