Once widespread throughout South-East Asia, giant ibis (Thaumatibis gigantea) is listing as Critically Endangered by IUCN and restricted to the dry forests of north-eastern Cambodia. Its population has declined rapidly late 20th century and continues to decrease due to degradation and conversion of habitat, hunting and disturbance. The project will secure Western Siem Pang (WSP) as a refuge for giant ibis in Cambodia by raising awareness about this species among local people, reducing and mitigating direct threats, contributing to the designate of WSP as a protected forest. Point count surveys will be used to gain comprehensive knowledge of giant ibis population and trends, nest protection schemes will be instigated to improve breeding success rates and a final workshop will be organized to develop an action plan. The project will produce awareness material, a technical report, species action plan, and article which will be submitted to the Cambodia Journal of Natural History. 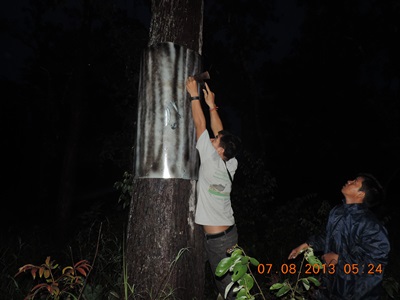