Ecological and distribution assessment of hicatee in Southern Belize

The Central American river turtle (Dermatemys mawii) is Critically Endangered (IUCN 2012) with populations still declining. Its distribution is limited to river reaches within Belize, Honduras and Guatemala. In Belize, hicatee (as it is locally known) is found in the central and southern portions of the country. This project aims to monitor the population and track individual turtles within the Rio Grande River, Southern Belize. Data will be mapped and used to increase scientific knowledge to inform management decisions and influence future legislation. This project will facilitate regulating agencies such as NGOs, educational institutions and government agencies to work with local communities which consume turtles and understand the need for their conservation. As a result, legislation to protect and manage turtles will be strengthened by extending the closed season and including limits to the number of turtles that can be harvested. This will contribute towards the long-term survival of this species. 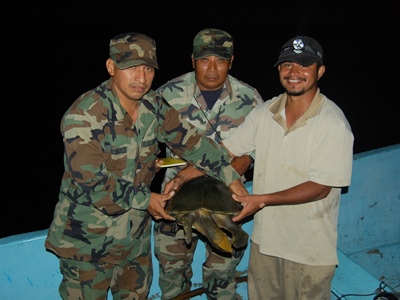