Status of lion-tailed macaques in the Nilambur forests of Nilgiri Biosphere Reserve, India

Lion-tailed macaques are endemic to the Western Ghats with an estimated population size of 3,500 individuals. Globally assessed as Endangered, these primates face threats from forest fragmentation and illegal hunting. Systematic population studies are lacking across their geographical distribution and several populations have not been reassessed for more than two decades. One such population was reported in 1997 from the Nilambur forests and has not been studied since. Nilambur lies in the Nilgiri biosphere reserve of the Western Ghats biodiversity hotspot in India. Our project aims to assess the status of the species in protected forests (Karimpuzha Wildlife Sanctuary) and non-forest areas along highways, plantations and agriculture lands from where they are being reported. Together with government agencies, indigenous and local communities, awareness about the species’ conservation needs will be promoted. Conservation actions to reduce threats and enable protection will be planned and implemented. Surveys will be performed along transects to monitor population and behaviour patterns. The potential threat posed by a major highway that cuts through the habitat will be assessed and specific remedial action taken. For the long term, our project will build the capacity of local ecologists and community members to manage community-based conservation projects. 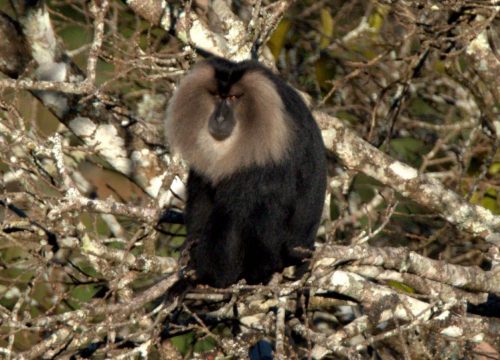