Mesophotic coral ecosystems (MCEs) (reefs at 30-150 m depth) have been poorly explored due to inaccessibility, but are likely to be buffered from shallow reef impacts because of the depth at which they are found.

This project aims to explore and document biodiversity on previously un-surveyed mesophotic reefs and make the first characterisation of reefs down to 60 m on two sites in a crucial area in the Mesoamerican Barrier Reef (Cozumel Island reefs) as well as investigate their roles as coral and fish refuges. We also aim to identify the extent, overlap and connectivity in coral and fish species between shallow reefs and MCEs and ascertain the role played by MCEs as a refuge for invasive lionfish (Pterois volitans). We will conduct stereo-video fish surveys and benthic video surveys on MCEs at two sites and their associated shallow reefs.

The project will support the local institution (CONANP) in incorporating MCEs into existing shallow reef focused marine conservation efforts and follow up surveys. We will analyse the stereo-video fish and benthic video surveys to look at similarities in fish and coral diversity, abundance and biomass between shallow reefs and MCEs. Results will be presented to CONANP to inform potential inclusion of MCEs in current protection management and strategies to reduce impacts of fisheries and tourism activities. 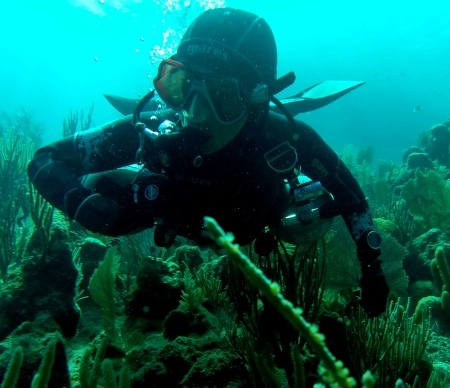