The gharial is a freshwater crocodile, endemic to the Indian subcontinent. Girwa river in Katerniaghat Wildlife Sanctuary has the second-largest breeding gharial population, which has been isolated to a 20 km stretch since 1976 due to damming (Girijapuri barrage). The population is threatened by the loss of nesting habitat and low juvenile recruitments. A channel shift in 2010 diverted the main water flow from Girwa and initiated rapid vegetation succession on sandy substrates. The result was reduced gharial nesting area and nest numbers, increased egg and hatchling mortality (Vashistha et al. 2021a). We successfully increased the nest number and hatching success by artificially constructing sandbanks in 2020 (Vashistha et al. 2021b). Our focus is on extending protection and identifying new habitat areas so that new nesting site options are explored. It will include stakeholder involvement, surveying the river downstream of the barrage, and ensuring higher survival of hatchlings by captive holding during floods. We primarily use boat surveys to collect data. We expect to maintain and further increase nesting efforts in the resident gharial population, increase hatchling survival and recruitment. Artificial sandbank construction is a resource-efficient in situ restoration method, however, we aim not to implement it annually, but provide additional protected habitat to help gharials explore and breed naturally. 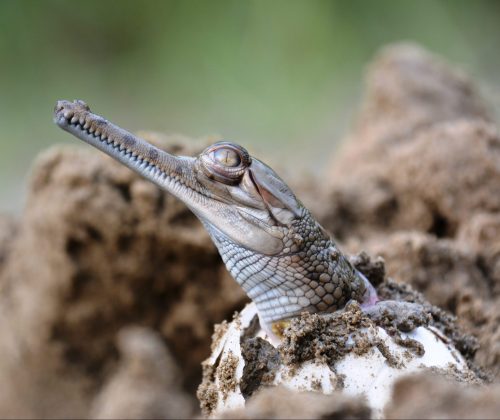