Northern muriqui Brachyteles hypoxanthus is a Critically Endangered primate endemic to the Atlantic Forest. Less than 900 muriquis survive in small wild populations in 11 isolated remaining fragments. The Caparaó National Park is one of the five priority areas indicated for muriqui conservation, but its muriqui population and the threats to the species are poorly known.

Our project purpose is to assess the muriqui population viability at Caparaó National Park and engage local communities, tourists and policy makers with its conservation. Using line transect surveys and acoustic passive monitoring, we will record, map and estimate the density of the muriqui population, as well as evaluate its long-term viability using the Vortex programme. Education and outreach activities will also be undertaken to promote the involvement and increase awareness of local stakeholders for muriqui protection.

This project will provide the basis for a monitoring programme and conservation of the species in the long term, and indicate measures for muriquis conservation that may be included in the Management Plan of the Caparaó National Park. Determining the population status and the threats to the muriqui provides a unique opportunity to conserve the species and to implement the targets proposed in the National Muriqui Action Plan. 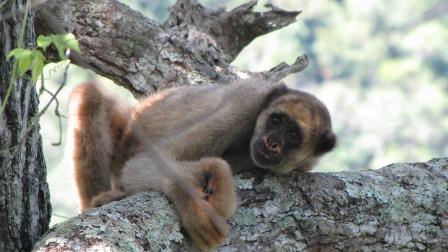