Leptodactylus laticeps (Santa Fe frog) is an endemic amphibian from the South American Great Chaco (Argentina, Bolivia, and Paraguay). Its global conservation status is Near Threatened (2004), with a decreasing population trend. In Argentina, it is considered Vulnerable (2012) based on the recent population decline. The threats faced by the species are related to the socio-cultural matrix composed of various coexisting ethnicities. The Santa Fe frog is hunted by indigenous communities (for food and international pet trade). Harassment based on aversion is another threat usually related to "criollo" communities. Since the ecoregion is facing one of the highest deforestation levels worldwide, it is unknown where population relicts are occurring. The grassroots movement in the Argentinean Great Chaco will gather efforts of local community leaders, farmers, biologists, conservationists, and educators to protect the species. Interviews and workshops for hunters will be held to better understand the over-harvesting conflict. Public engagement campaigns will be used to change community attitudes toward the species and to engage local actors. Extensive fieldwork will serve to detect the population relicts. Finally, this project will update the global conservation status and create an action plan toward a future international conservation strategy to protect the Santa Fe frog in one of the most threatened ecoregions worldwide.

Find out more and meet the award-winning team: 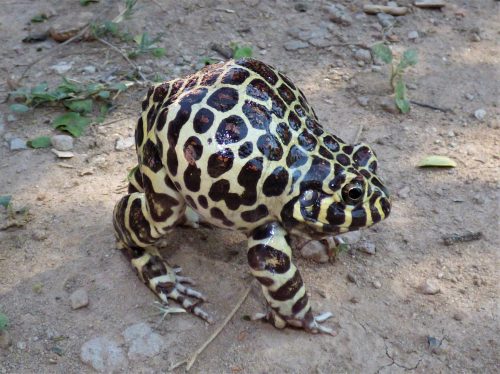