Sawfishes, also known as carpenter sharks, are the only elasmobranchs included in Appendix 1 of the Convention on International Trade in Endangered Species (CITES), which prohibits any commercial trade in those species. The decline in sawfish populations worldwide has prompted the International Union for the Conservation of Nature and Natural Resources (IUCN) to list all sawfish species as Endangered or Critically Endangered on the IUCN Red List. Despite rising international concern for sawfish conservation, they are not specifically highlighted for protection efforts in Indonesia. A main threat to sawfish populations is commercial fishing. Sawfishes are often captured as non-target organisms (by-catch) due to their tooth-studded rostra becoming easily entangled in fishing nets. Furthermore, fishermen in some regions still concentrate on catching sawfishes due to the high price that can be obtained for their fins.

This project will combine fisheries surveys, environmental DNA analysis, citizen science and interviews to: (1) investigate by-catch factors underlying the decline of sawfish populations, (2) identify the current status of sawfishes and inform the local government so that legal protection and conservation management plans can be implemented, and (3) raise awareness about sawfish conservation among local communities. 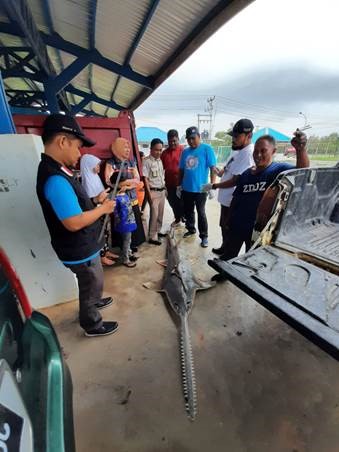