The spoon-billed sandpiper, Calidris pygmaea (Critically Endangered) and Nordmann’s greenshank, Tringa guttifer (Endangered) are two of the most threatened migratory shorebird species in the world. They congregate on the south Jiangsu coast in significant numbers during a southward migration stopover. Habitat loss and hunting along their migration routes are two of the possible causes of their rapid decline. We aim to improve our understanding of the stopover ecology, especially the feeding ecology of these two species on the south Jiangsu coast during southward migration, by conducting regular weekly counts, focal bird observations and macro-benthic sampling. We will conduct community work to raise the environmental awareness of local fishermen and enterprises who work along the coastal area. We will also produce a project report, publish results in one (or more) peer-reviewed journal and have data available for predicting development impacts on these species by the end of the project. Such information will allow researchers and managers to distribute their management effort more effectively when conserving and monitoring these threatened species. Our findings will have implications that go beyond our study area because the basic ecology of these species remains poorly known and they rely on similar coastal intertidal wetland habitat throughout their non-breeding season. 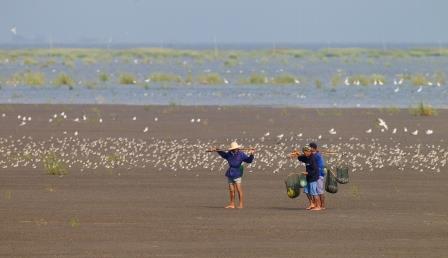