Human-tiger conflict is one of the key problems in tiger conservation. The Indonesian government has tried new ways of resolving human-tiger conflict by translocating problem tigers. The project goal is to provide information on resident tigers and their prey species densities within translocation sites and to raise conservation awareness among people living these sites. The objectives are to determine the number of resident tigers in the area and their prey species abundance, to study the people’s attitudes to tiger conservation, and to raise/increase the awareness of local community. A capture-mark-recapture survey of existing tigers in the area will be conducted using camera traps while prey abundance will be measured through occupancy methods. Questionnaire surveys will be conducted across ten villages in the region on either side of the forest to assess attitudes and issues with the translocations. Awareness activities will then be carried out in five villages, including presentations about tiger conservation. To finish, the attitude surveys will be repeated at the end of the project to assess whether the awareness campaign made any difference to the receptivity of the residents to translocations. The result of this project will be used to provide recommendations to the Indonesian government on the suitability of the area as a translocation site. 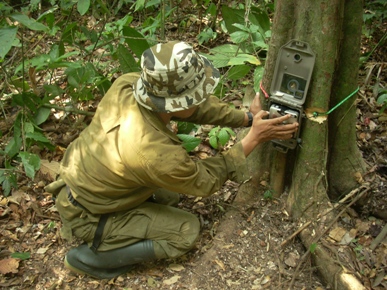