The reticulated giraffe has experienced greater than 80% population declines and is currently listed as Endangered by the International Union for Conservation of Nature (IUCN). About 90% of reticulated giraffes inhabit Kenya, with each subpopulation facing different threats in different parts of their range. In Laikipia, for example, relatively intensive land management leads to habitat fragmentation. In regions such as Samburu, Isiolo, and Marsabit—which are occupied primarily by pastoralist herdsmen—poaching, habitat degradation, and human encroachment on protected areas are the primary threats. In areas along the Kenya-Somalia border, these factors are further exacerbated by military conflict, terrorism, and a growing trade in giraffe meat across the Somalia border. Because the majority of reticulated giraffes occur in Garissa, along the Kenya-Somalia border, this project seeks to reduce the threats they face in these areas by i) assessing ongoing conflicts between farmers and giraffes, ii) testing and recommending conservation interventions such as the use of motion sensor floodlights and bee fences in deterring farm invasion, and iii) conducting outreach to local communities to reduce human-giraffe conflict. Overall, the project will aid in the conservation of the reticulated giraffe population by reducing mortality in this region. 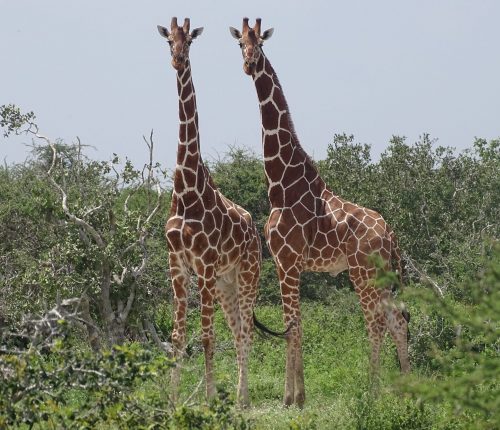