With this award, a training camp will be established to train the future ambassadors of amphibian conservation in China to build their capacities and develop their careers. The team will also publish and distribute an educational pack to accompany the training camp's teaching. In 2013 the team reported that they produced the first ever guidance handbook for conservation careers in China. the handbook, published by the Yunnan Science Technology Press, brings together articles on famous figures who established fauna and flora studies in China, with contributions from current practitioners in the field, and information on conservation career concepts, Chinese conservation systems, education paths and related government departments.

Project update: “The Ailao Mountain Range is one of the most important natural habitats for many endemic amphibians and other unique wildlife species in Southwestern China, with much of the area remaining intact and thoroughly unexplored. The CLP and KSMA-funded projects will help to better understand the conservation status of each key site, build conservation capacity for local rangers and develop a species inventory, as well as other educational packages, for wider distribution. One of two species of moustache toad assessed by a CLP-funded team in 2007 “During September and October, the team finished basic survey preparation; they will go into the field for the first time in late November, to study some winter-breeding amphibian species. More fieldwork and community-based education activities will be conducted in the Spring of 2012 and 2013. The guidance handbook for conservation careers in China is currently in the design and compilation phase. The author group, together with other Chinese CLP alumni, will bring real-life conservation stories from CLP-funded projects into the handbook. The handbook will be completed in draft by the end of 2012 and is expected to be officially published in 2013. Moustache toads are so named for the black keratinized spines on their upper lips 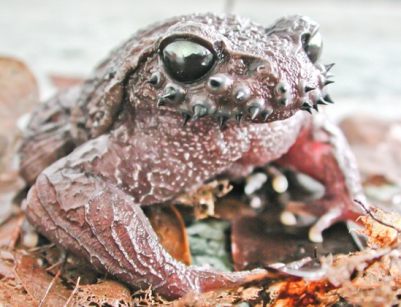