“Hey, someone has a shark! It’s Bapak Tami!”

I barely heard the fisher’s shout. The wind was quite strong and the noise from the small solar-engine in our wooden boat made it hard to hear anything clearly. Pak Mark Erdmann, our supervisor from Conservation International Asia Pacific, was here that day, along with Sarah Lewis my professional supervisor from the Manta Trust. Both were helping us with the trip we organized to tag thresher sharks in Alor, Indonesia, as part of our CLP project.

I gave signal to the other fisher, Bapak Sahlul, who rolled back his string with no catch, and headed to Bapak Tami’s boat. Bapak Tami was still moving his hands, up and up, as he tried to get the shark to shallower depths. Pak Mark and Sarah joined us in their boat. We were three boats moving in a circle, waiting to see if it was the shark we were looking for. 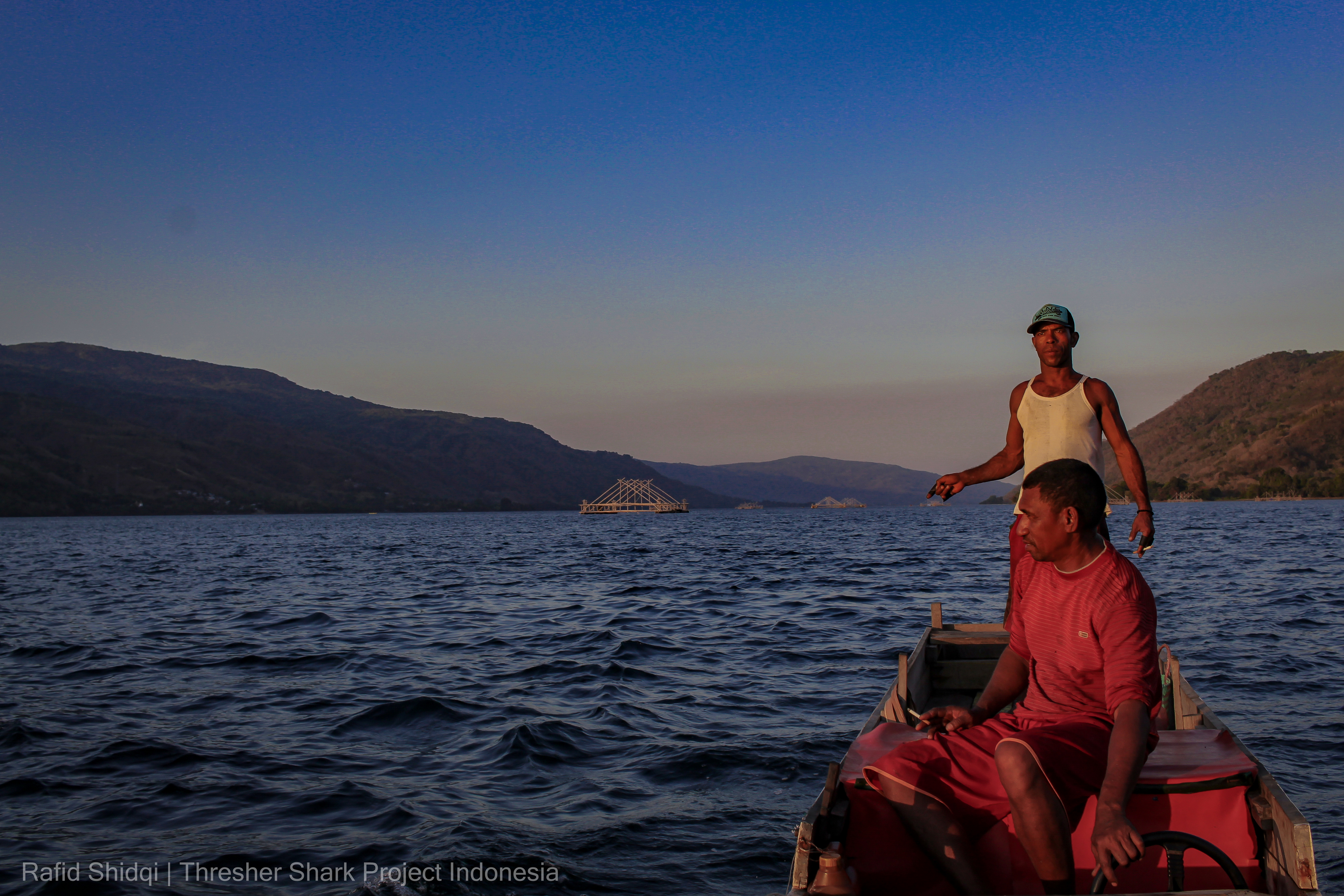 Thresher sharks are listed as vulnerable from International Union for Conservation of Nature (IUCN). In Indonesia, they are become common catch within big tuna fisheries but the information about the species is very limited, especially regarding their habitat and movement for the conservation measures. Their population has declined in Indonesia by more than 80% and it continues to decrease. The Indonesian government is planning to improve the conservation management of this species and data from this project will help us make recommendations on how the thresher can be well-protected.

I was feeling desperate to see a thresher. We had spent almost four hours under the scorching sun, sometimes without wind, waiting for the fisher to catch something. When someone shouted that a shark was caught, I almost exploded in joy!

I couldn’t wait any longer to get into the water. After I filled the survey form, I grabbed my underwater camera and jumped.

“Is it up now?” I asked Bapak Tami as he continued to pull up the lines. A few minutes later I put my head in the water and looked into the dark, deep sea. The rays of the sun faded as I traced the fishing lines with my eyes, deeper and deeper.

I couldn’t believe what I saw in that moment; a long tail wiggled up and down. It was indeed a thresher shark! It seemed to be very exhausted after being pulled up from the depths and it moved sideways very slowly tried to disentangle itself from the strings that gripped its long tail. 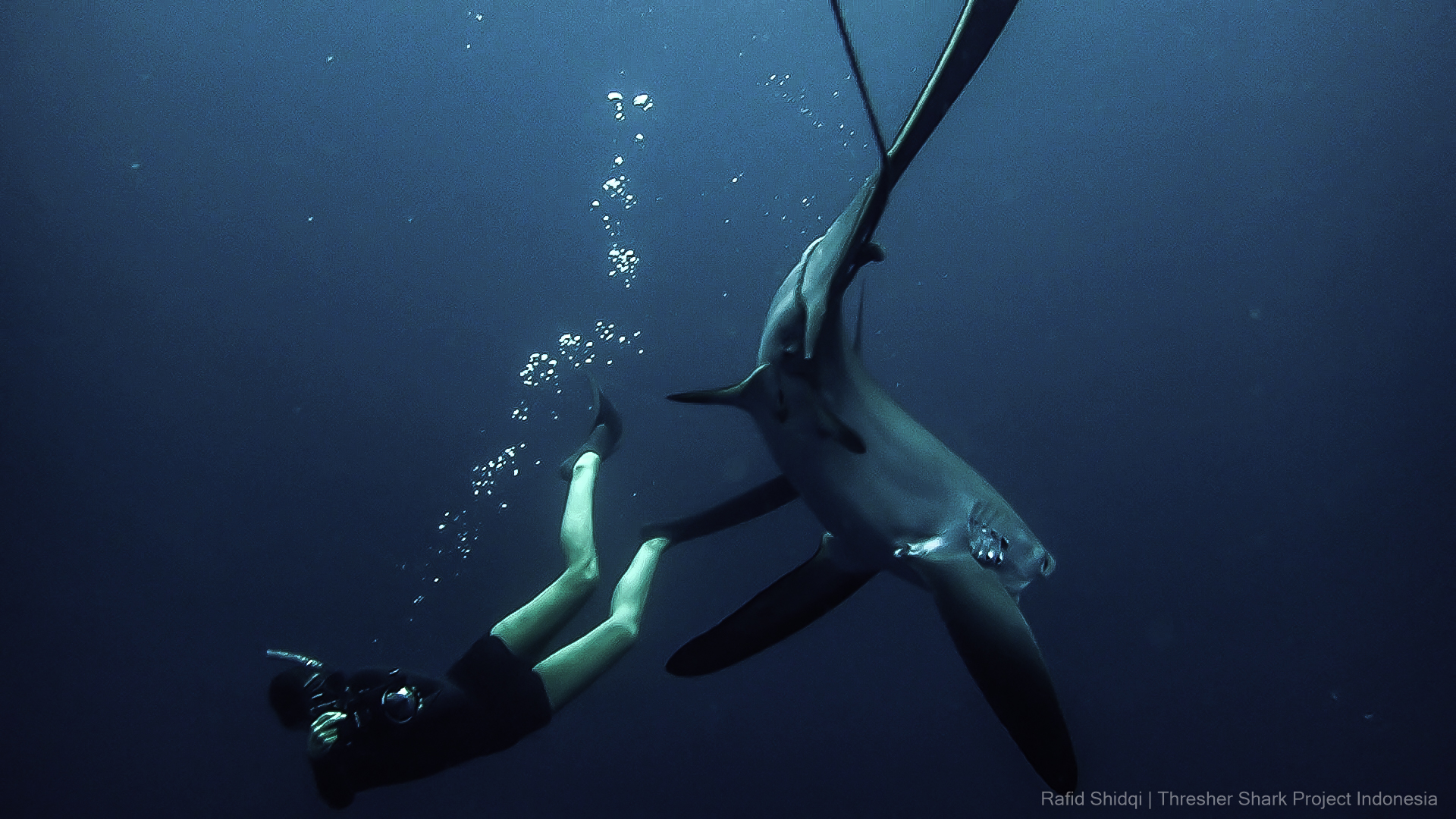 That’s how people in Alor catch the shark; they learned how to modify their fishing lines so they target thresher sharks specifically. People in Alor rely on this species as a source of livelihood, where meats of threshers consumed locally and distributed within local markets. Fishers join multiple hooks into one and tie colorful strings in each of the sides so the shape mimics that of its prey. The string color is not random. When a thresher shark is caught the day before, they cut the gut and find out what kind of food the shark had eaten. Black strings are to mimic small black anchovies, red to mimic squid and chicken feathers to mimic small mackerels. Fishers have to change the bait every day to match the shark’s desired meals.

Thresher sharks use their long tail to stun fish before eating them. When the shark slaps the joined-hooks, its tail can become stuck, immobilizing the shark and making it difficult to fight back.

Pak Mark prepared our satellite tag and the spear pole used to sink the dart into the shark’s musculature. Once the shark is tagged, we will be able trace its movements via satellite.

Sarah and I were swimming in a circle, trying to catch good images and videos. Meanwhile, the fishers on the boat lifted the shark to the surface and tied the tail with a rope so we could take measurements. We waited a few minutes for the shark to recover before measuring its length. Afterwards, Pak Mark aimed the tag at the base of the dorsal fin where the satellite tag will be deployed. I was waiting very nervously with my camera. When the current started to change, waves began to rock the boat, setting all of us on edge.

I saw bubbles and heard a short sound from the pole as the tag was transferred to the dorsal fin of the thresher. The shark showed little sign of being hurt when the tag was secured, aside from a little blood. It wasn’t long before the shark began to opened and closed its gills. Once stabilized, Pak Mark checked the response and untied the rope so it was able to swim back to the deep. It swam very slowly at first, but picked up speed as it descended out of sight.

The sun had already set and the wind was picking up so we headed back to the village. I took a deep breath, relieved that we finally tagged the shark. We tagged the shark! 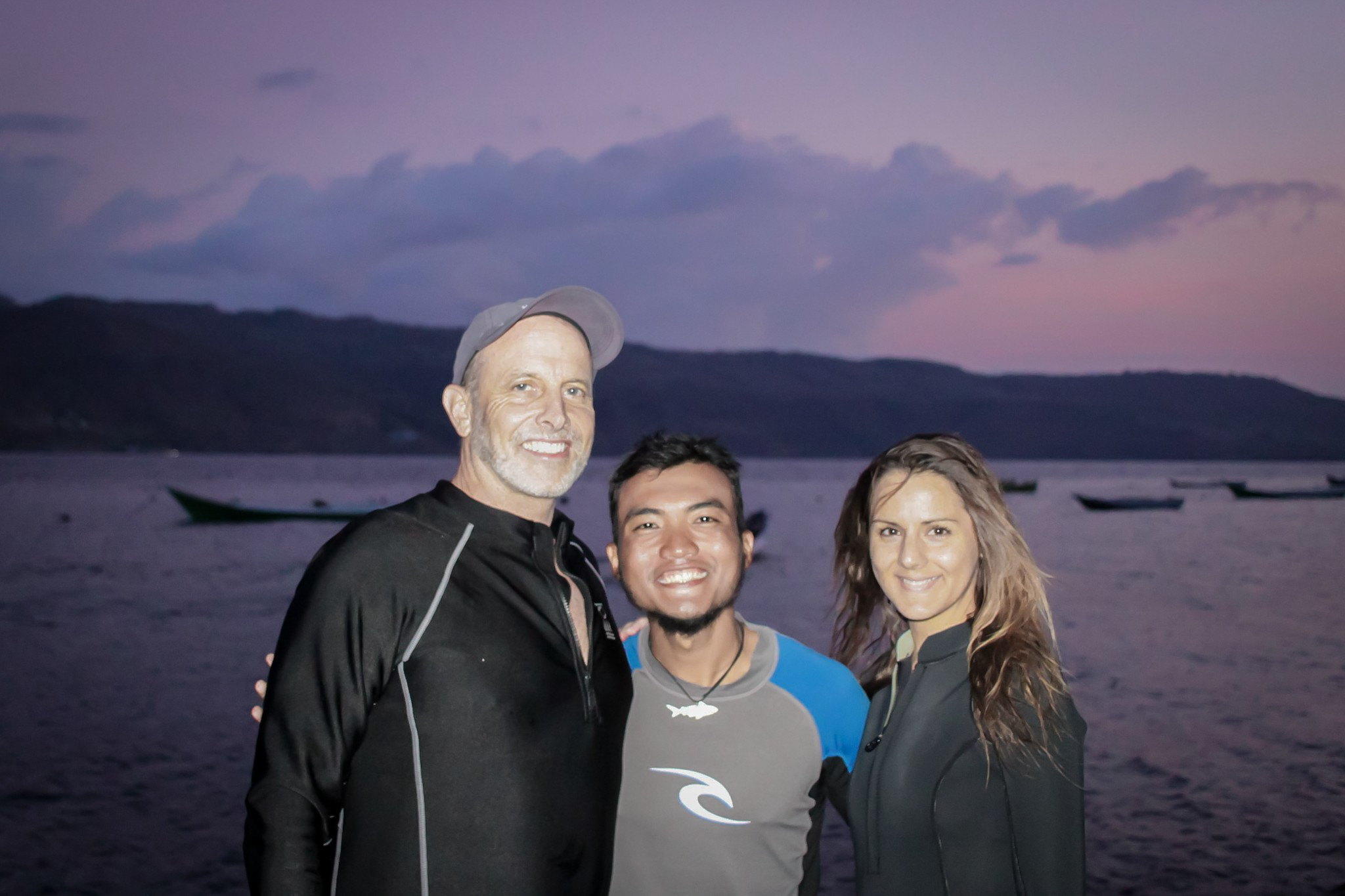 Not only that, it was my first time to see a live thresher shark. And, this was our very first thresher shark to be satellite-tagged in Indonesia! I couldn’t hide my excitement!

I can’t wait to see what data the tag will generate. Hopefully our work can help solve a little mystery about the shark: where are they going….? With this data we will be one step closer to recommendations that help could help conserve this amazing creature.