Last week, the Conservation Leadership Programme (CLP) hosted the first of a three-part public webinar series taking place throughout June 2021. In the webinar, experienced conservationist, fundraiser and CLP trainer, Maaike Manten, shared her ten top tips for designing good conservation projects. For those who missed it (or just fancy a recap), Maaike’s tips and the webinar recording are available below. 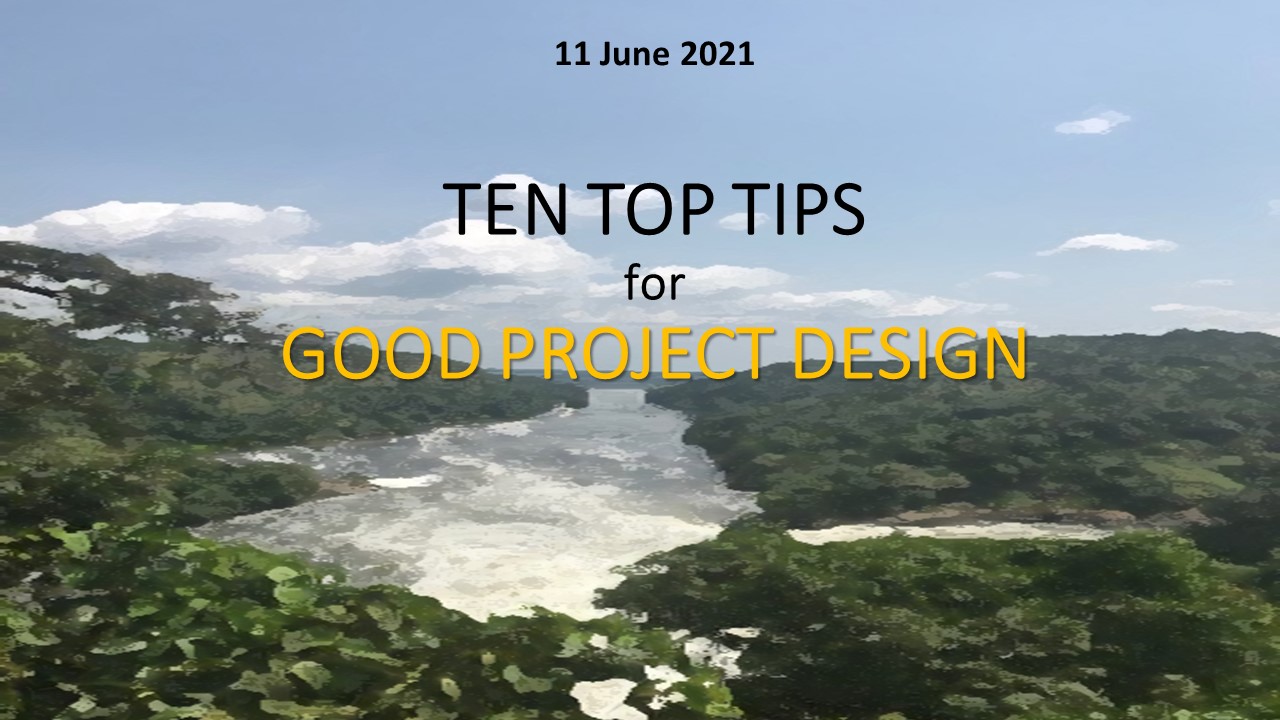 Trained as a political scientist in Amsterdam, Maaike Manten started working for BirdLife International (one of the three CLP partnership organisations) in 2000 – first in the UK and Kenya as the Institutional Fundraiser for Africa, then in Fiji as the Fundraiser for the Pacific. She now works in Rwanda as the Regional Implementation Team leader for the Critical Ecosystem Partnership Fund (CEPF)’s investment programme, previously in the Eastern Afromontane biodiversity hotspot (2012-2020) and currently in the Mediterranean Basin hotspot. Maaike has been working with CLP since 2009, providing project design, proposal writing and fundraising trainings to young conservationists in Far East Asia, Latin America, East Africa and Central Asia.

Around 350 people registered to attend Maaike’s CLP webinar on June 11, 2021. This was by far the highest number of registrants we’ve had so far for such an event, reflecting the importance and relevance of the topic being discussed. As Maaike commented at the start, “A lot of you are probably waiting for ‘silver bullets’…those top tips that will turn your project designs into fundable proposals.”

Maaike recommends applying all ten of her ‘silver bullet’ tips to your project design, to not only help you with your fundraising efforts but also achieve better conservation impacts.

For more guidance around each of these ten tips, you can watch the recording of Maaike’s webinar below:

This blog was originally published on the Conservation Careers website, which can be found here.

In this interview, communications specialist Marie Conroy speaks to Vishal Ahuja, a Conservation Leadership Programme (CLP) alumnus and teacher turned conservationist, who has dedicated himself to protecting the sacred langurs of Chamba, an Endangered leaf monkey.

By studying their behaviour, engaging local communities and farmers, and restoring their natural habitats, Vishal tells us his story and why he is so passionate about conservation.

When the government of Himachal Pradesh, a state in Northern India, introduced a new land policy in 1968 to help needy people, little did anyone realise the impact this would have on wildlife. As a result of the policy, land was cleared of trees for agriculture and horticulture. At that time, the rezoned land was inhabited by many animals including the now Endangered Himalayan grey langur, a leaf monkey, also known as the sacred langurs of Chamba.

With the loss of its natural habitat, the animals now frequently raid farms for food, resulting in conflict with local farmers, many of whom feel helpless against the furry raiders stealing their crops and impacting their livelihoods.

This is where Vishal Ahuja comes in. Teacher turned conservationist, Vishal has dedicated himself to protecting the sacred langurs by studying their behaviour, engaging local communities and farmers, and restoring their natural habitats for the benefit of all those who rely on it for their existence.

From the classroom to the forest

Vishal grew up in the village of Chamba, surrounded by mountains and forests. From a young age, he was fascinated by the beautiful natural world around him, often questioning why some areas had no trees, and what could be done about this.

Initially his first calling was teaching. This held his focus for some years, going to his classes and passing his exams so he could go on to become a teacher. Only after he graduated did he begin to really look at the natural world around him. “I started hiking around the mountains and I realised we have beautiful forests. I was fascinated by the forest and the wildlife”, he says.

Luckily for Vishal one of his teachers, Dr Bipan C. Rathore was studying conflict between Himalayan brown bears and migrating shepherds. Vishal started to join him when he visited a local wildlife sanctuary, the Kugti Wildlife Sanctuary, collecting data on the conflict. This experience changed him, inspiring him to pursue a career in conservation.

Getting to the root of the issue

When the Himalayan Langur Project was initiated in 2012 with support from the NGO, Wildlife Information Liaison Development Society, and a CLP Future Conservationist Award, little was known about the langurs and the cause of the conflict. The team’s first step was to establish distribution information, map conflict zones and identify other conservation threats in the region.

To do this, they visited over 240 sites on foot. This was difficult work, and they faced many barriers including poor weather conditions, which can lead to landslides, and many villages are under snow cover for months.

As they visited the villages and spoke with the farmers, they discovered that langurs were not the only raiders: black bears, porcupines and macaques were also destroying the crops.

During their work, the project team discovered that one of the causes of deforestation was a previous government policy introduced in 1968, called the Nautor Land Rules.

This policy allowed those earning less than 2,000 rupees to be given land for agricultural and horticulture activities. It also allowed local people to have land cleared of trees. The initiative allowed farming to flourish in the area, but not without consequence on the surrounding environment. There was significant habitat degradation and deforestation leading to fragmentation of the forest and destruction of the natural corridors which the animals relied on.

With the remaining ‘fragmented patches’ no longer capable of providing food for wildlife and their natural corridors destroyed, the animals turn to the farmed crops for food. As described by Vishal, “their natural home has been disturbed. With the loss of many native trees and typical plants, the langurs have to come out of the forest to find food”.

This raiding behaviour led to conflict with local farmers. During Vishal’s visits he found the true extent of feelings against the langurs and the alarming situation that the farmers wanted them removed from the forest.

However, now almost nine years into the project, things are beginning to improve as a result of Vishal’s persistent hard work and support from the project founder and mentor Dr Sanjay Molur.

Even better for Vishal and crucial to the success of the project is that the local communities and farmers are now listening and beginning to understand the issue. As a result of numerous meetings, he has developed good relationships with them, helping to gain their confidence and build understanding.

While they once were telling him to take the langurs away, they are beginning to understand the need for co-existence. Vishal has helped them understand that the wildlife is dependent on the forest, and if they cannot get what they need from the forest, they will come to farms looking for food.

When I ask him, How does that make him feel? Immensely proud, it turns out: “The fact that they are listening, trust me, and understand the situation makes me very proud. And I feel very proud that the words we are saying are having an impact”.

So, is this a job for everyone?

According to Vishal, it’s not. While the project is yielding some results, it is extremely hard work, and it can take years to see real change. And while it may seem serene to be working in a forest it can be lonely.

And then there is the unpredictable weather. “Halfway to your destination it can start raining heavily and you have to turn back,” he explains. To make matters worse, many villages are quite remote and on arrival, it can happen that either no one is home, or the head of the family and main decision maker is not home.

Not only does Vishal’s work take constant dedication. He often has difficult conversations with farmers who see their livelihoods being destroyed and as a result feel helpless and angry. But he knows it is core to the project’s success that he helps farmers understand what is needed for peaceful co-existence.

And this does not discourage him. In fact, he still says it’s his childhood dream come true. “The fact is, you’re working for the betterment of mankind. If you are passionate about conserving nature and wildlife, if you have that passion inside you, then you can tackle all the challenges”.

To discover more about this project visit the project’s Facebook Page, the website for WILD  and the CLP project pages.

Marie Conroy is a communications professional from Ireland. She is a keen traveller, loves sailing and exploring the natural world, taking lots of wildlife photos along the way. Her dream is to enable conservation projects by combining her skills in communications and passion for writing, with her lifelong love for nature.