Three-time CLP award-winner, Alberto Campos, shares his insights from a 28-year career in conservation: from co-founding a national NGO and spearheading key conservation successes, to pursuing a PhD in an effort to create the first large-scale rewilding reserve in Brazil. 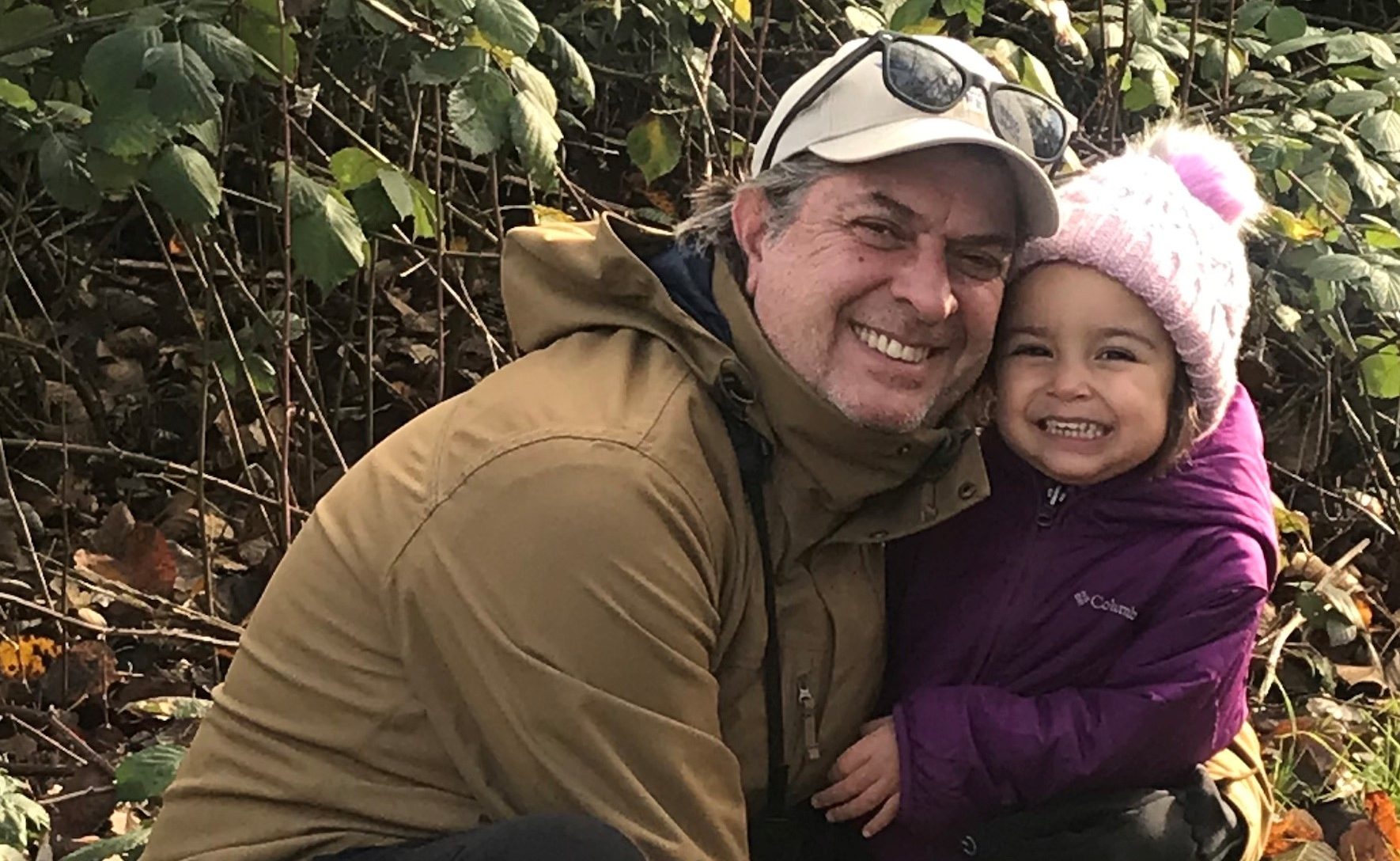 While still an undergraduate student in 1994, Alberto co-founded the Brazilian NGO, Aquasis (Associação de Pesquisa e Preservação de Ecossistemas Aquáticos). He has since spent the majority of the last three decades as its Director leading efforts to protect threatened birds, primates and manatees and their habitats in north-eastern Brazil.

Alberto believes his team has been key to keeping him motivated all these years. “Along with my firm beliefs about the importance of conserving nature and preventing extinctions, I think the most important factor keeping me motivated in the long-term has been working with a group of committed, like-minded people.

Working for an NGO can sometimes be emotionally and financially challenging, so having a group of people that can support and inspire you to keep going – even through difficult times – is essential.”

Saving a bird on the brink

Alberto first joined the CLP alumni network in 2004, as a member of a team leading efforts to conserve the Critically Endangered Araripe manakin – one of the world’s rarest and most spectacular birds. 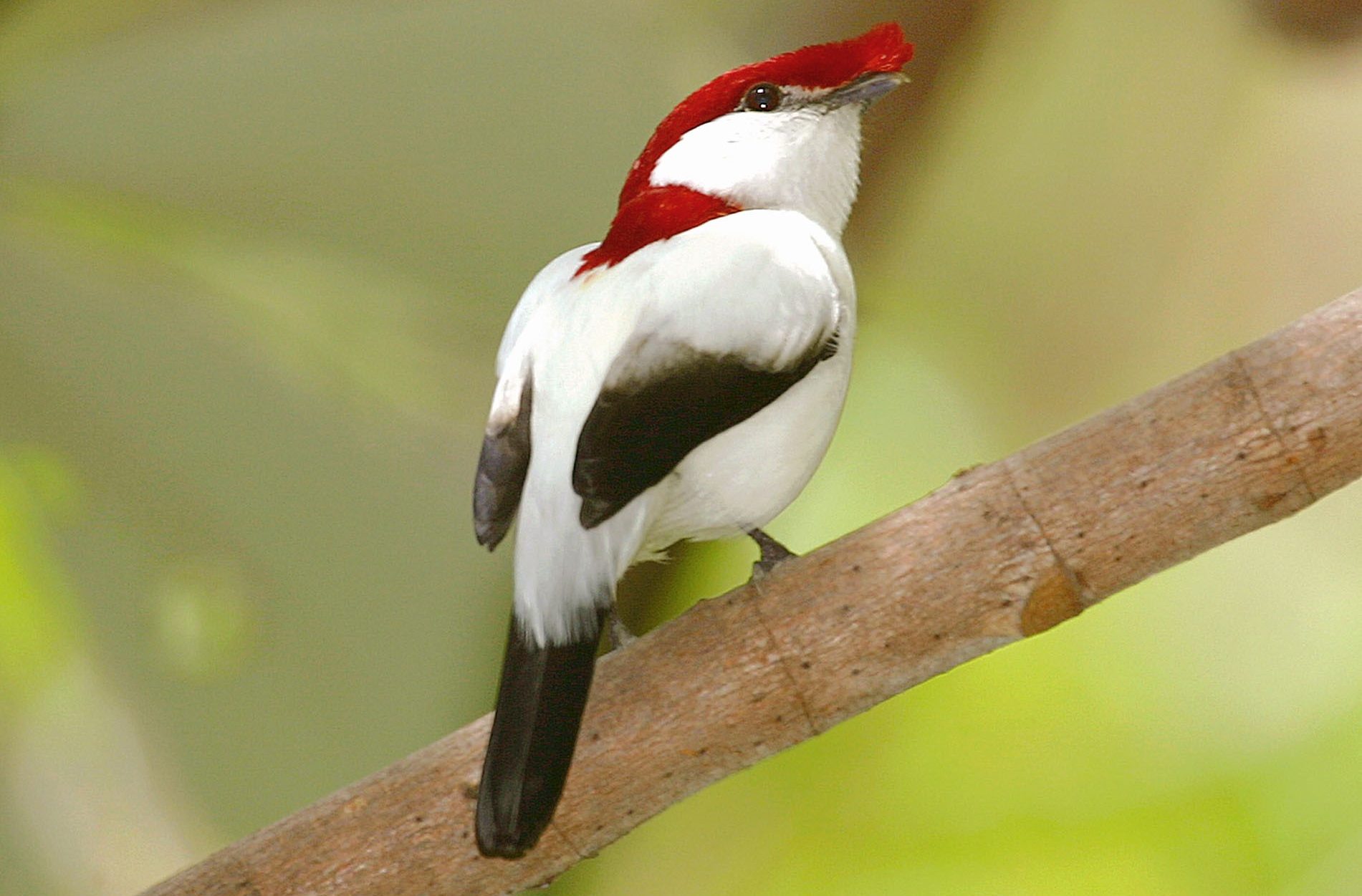 The species was first discovered just 26 years ago by Weber Silva (another CLP alum and team leader of the Araripe manakin project) but its precarious existence was realised not long after its discovery.

When the CLP project began, the world’s Araripe manakin population was estimated as less than 250 individuals that were restricted to just an 11-square-mile stretch of forest on the north-eastern slopes of the Chapada do Araripe (Araripe Plateau) in the state of Ceará, north-eastern Brazil.

It quickly became clear that this manakin was vulnerable to extinction because of its dependence on a unique type of ‘wet forest’ in the Araripe Plateau that harbours natural springs in an otherwise drought-stricken caatinga shrubland environment. Human encroachment to exploit this precious water source was threatening to destroy the Araripe manakin’s unique habitat.

In response, Alberto and his team helped produce and publish an officially recognised conservation plan for the species in 2006, in partnership with BirdLife International and the Brazilian Ministry of Environment. The plan was based on the extensive field research and environmental assessments the team carried out as part of their CLP Future Conservationist Award project, and was later adopted by the Brazilian environmental authorities as the official National Action Plan for the species. 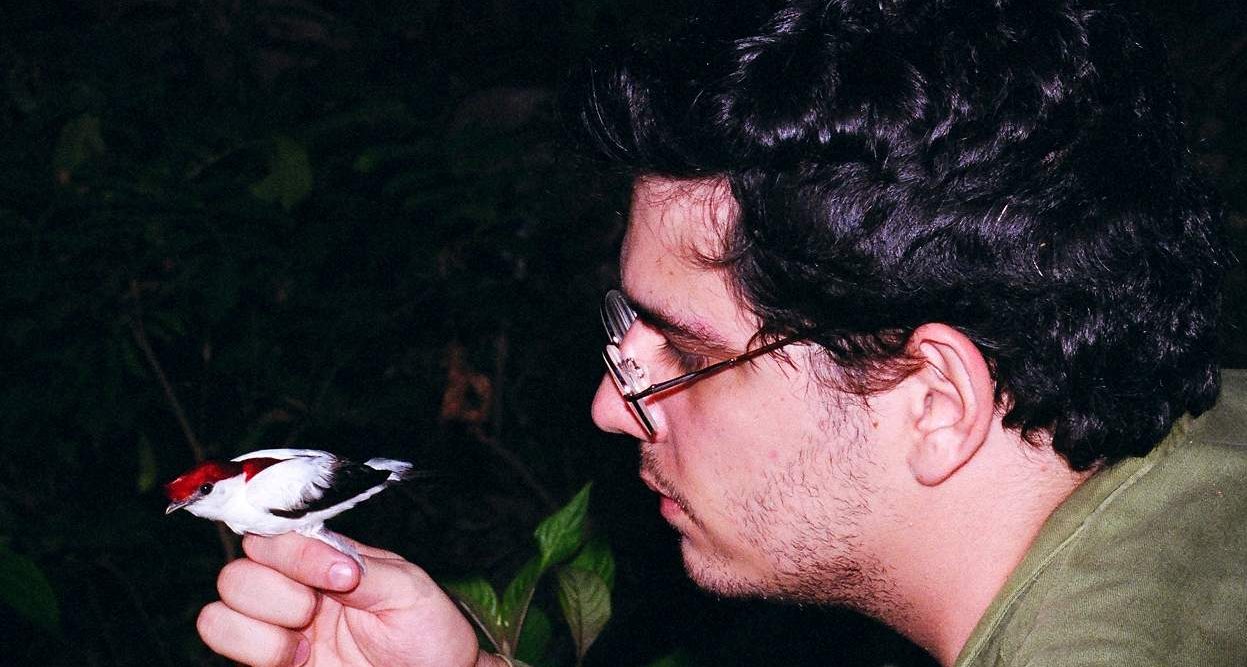 Weber Silva, the Araripe Manakin Project coordinator, and co-discoverer of the species back in 1996 © AQUASIS

“As a direct result of our CLP Future Conservationist Award, our team managed to create an incredible level of public awareness and engagement about Araripe manakin conservation in the region,” said Alberto.

From being virtually unknown when the project started, this endemic bird quickly became a local celebrity, a source of pride, and a tremendous messenger to promote wildlife and water conservation.”

One year on, the same team received a CLP Follow-Up Award to fulfil one of the key recommendations from their conservation plan: to protect the Araripe manakin’s remaining habitat. As a result of this work, they started the process of establishing a federally protected area for the species in the Araripe Plateau, in close collaboration with local communities and key stakeholders.

“In our CLP projects, we not only created a large protected area encompassing most of the known range of the Araripe manakin – the Araripe Manakin National Wildlife Refuge – but also established two private reserves (a third is now on the go) to protect water sources and key nesting territories, called the Oasis Araripe Reserves, supported by the American Bird Conservancy and IUCN Netherlands Land Acquisition Fund,” said Alberto.

In 2010, Alberto and the team won CLP’s top prize: the Conservation Leadership Award (worth $50,000). This award supported the team’s efforts to consolidate the aims of their previous CLP projects by raising awareness among local communities, implementing a habitat recovery and enrichment initiative, and monitoring the creation of the protected area.

“The CLP training and networking opportunities undoubtedly helped to shape my understanding of the conservation process and develop a much more integrated vision for long-term projects. Not to mention the funds for conservation projects and many other funding opportunities that arose through CLP or their partners, such as travel, exchange and mentoring,” said Alberto.

The stepwise funding and the long-term support are unique to CLP, and considering all the above together, from my experience, this makes CLP one of the most important conservation partnerships in the world.” 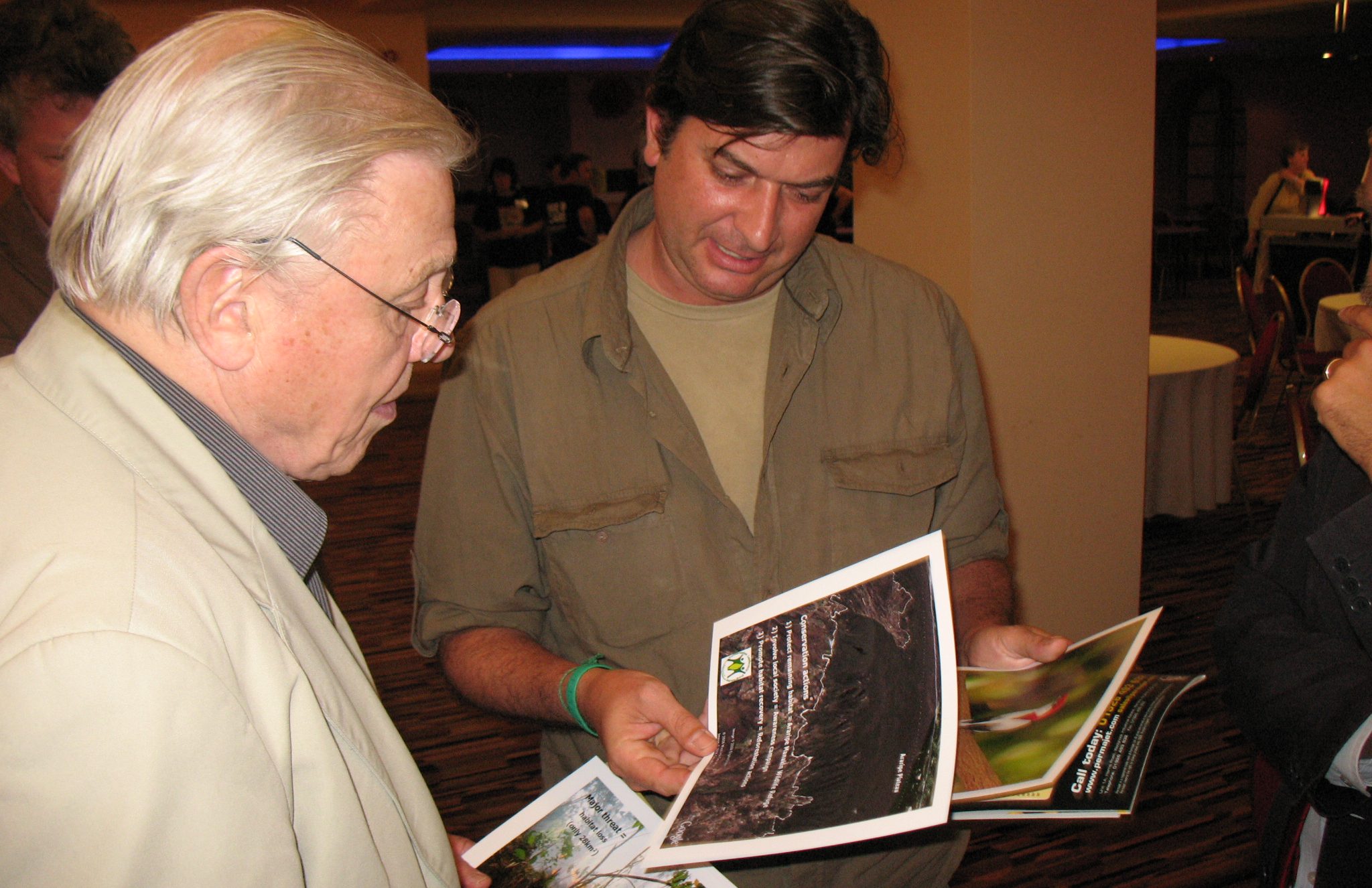 Impressively, in the same year he received the CLP Leadership Award, Alberto won an additional accolade: a Future for Nature Award to support another Aquasis project aimed at conserving threatened manatees in Brazil.

So, what does he think has been the secret to his success?

“Teamwork! The success of our NGO has been based on the team’s ability to select, engage and maintain a motivated group of people. Secondly, we manage the NGO like a business, in terms of planning and pursuing its goals effectively and following legal, fiscal and financial good practices.

However, what sets it apart is that it’s a business with solidarity. It seeks not just to thrive, but to develop its team, to improve the overall social-ecological conditions for the people living near our projects, and to provide environmental quality and ecological justice for all beings.”

The Araripe Manakin Conservation Project is just one of many successful conservation programmes run by Aquasis in northeastern Brazil. A few years ago, CLP published an article describing how a team at Aquasis, led by Fábio Nunes, managed to save the then Critically Endangered grey-breasted parakeet from the brink of extinction – in a campaign started in part as a result of a CLP-funded project led by Fábio in 2012.

A team at Aquasis has led a hugely successful project to conserve the grey-breasted parakeet in its known range in the Baturité Mountains (Ceará, Brazil) © AQUASIS/Fábio Nunes

Alberto created the Grey-breasted Parakeet Project in 2007, together with Weber Silva and Ciro Albano, and recalls the amazing moment he realised the actions they were taking to save the species were finally working.

“One of my dearest memories was when the grey-breasted parakeet first occupied our nest boxes. The species was so rare in the wild that we knew very little about their reproductive and feeding habits, so we had been testing several types of nest boxes across their known range in the Baturité Mountains (Ceará, Brazil).

After nearly a year of adaptive trials with no occupation of the boxes, we were at the point of changing tactics (not giving up!), when a local TV crew asked to accompany us on the next monitoring trip.

In a freak coincidence, as we stopped in front of one the nest boxes to record a take, a little colourful head popped out of the round opening of the wooden box. The bird screamed loudly and sharply, as only parakeets can do – probably complaining about the noise we were making – and raucously took off, followed by its mate.” 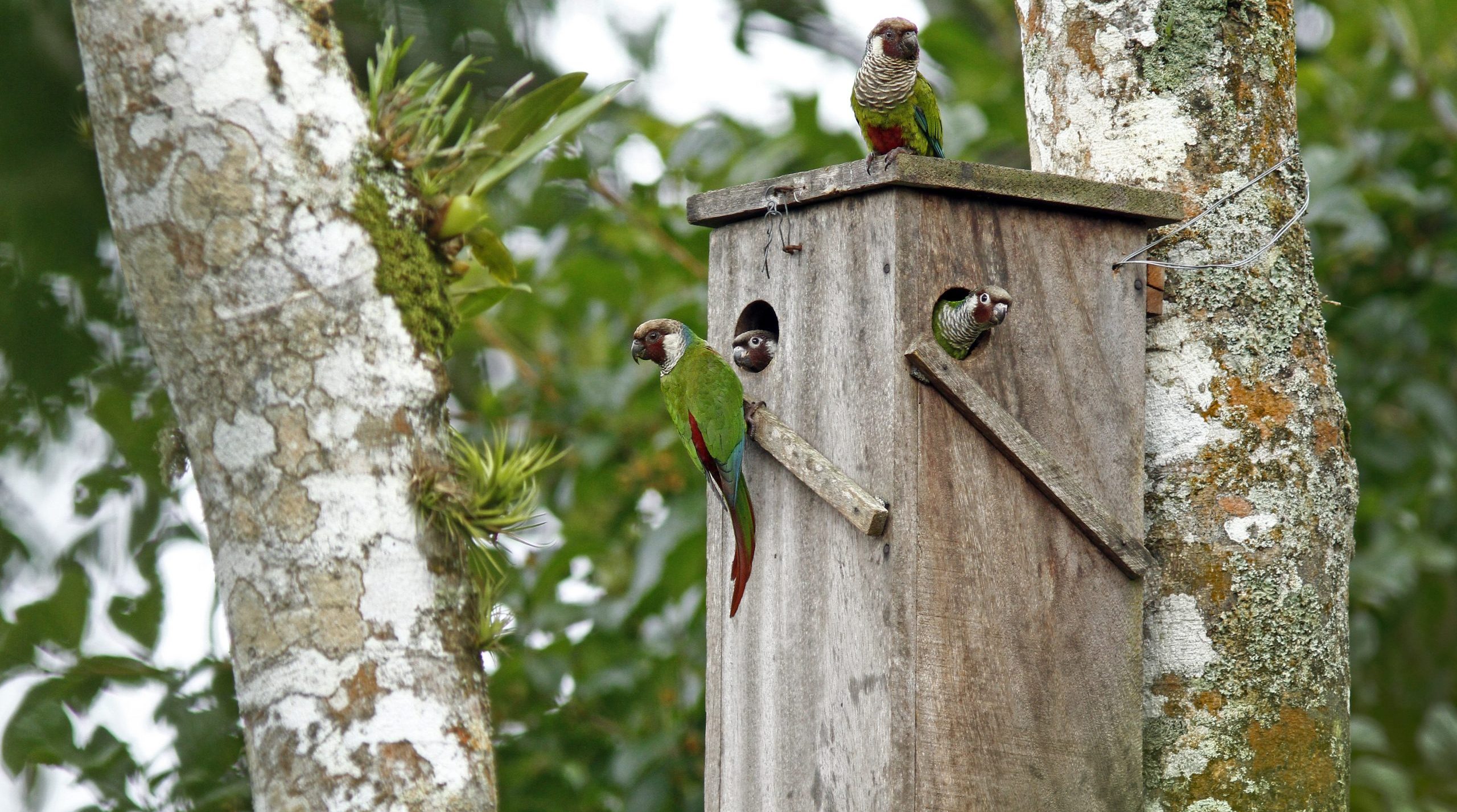 Alberto continued: “That was the very first observed occupation by the species of our nest boxes, and it ended up in the national news.

Ten years later, the project team received the Brazilian National Biodiversity Award from the Ministry of Environment, because the successful nest box campaign managed to increase the wild parakeet population many fold, and the species was down listed from Critically Endangered to Endangered on the global IUCN Red List.” 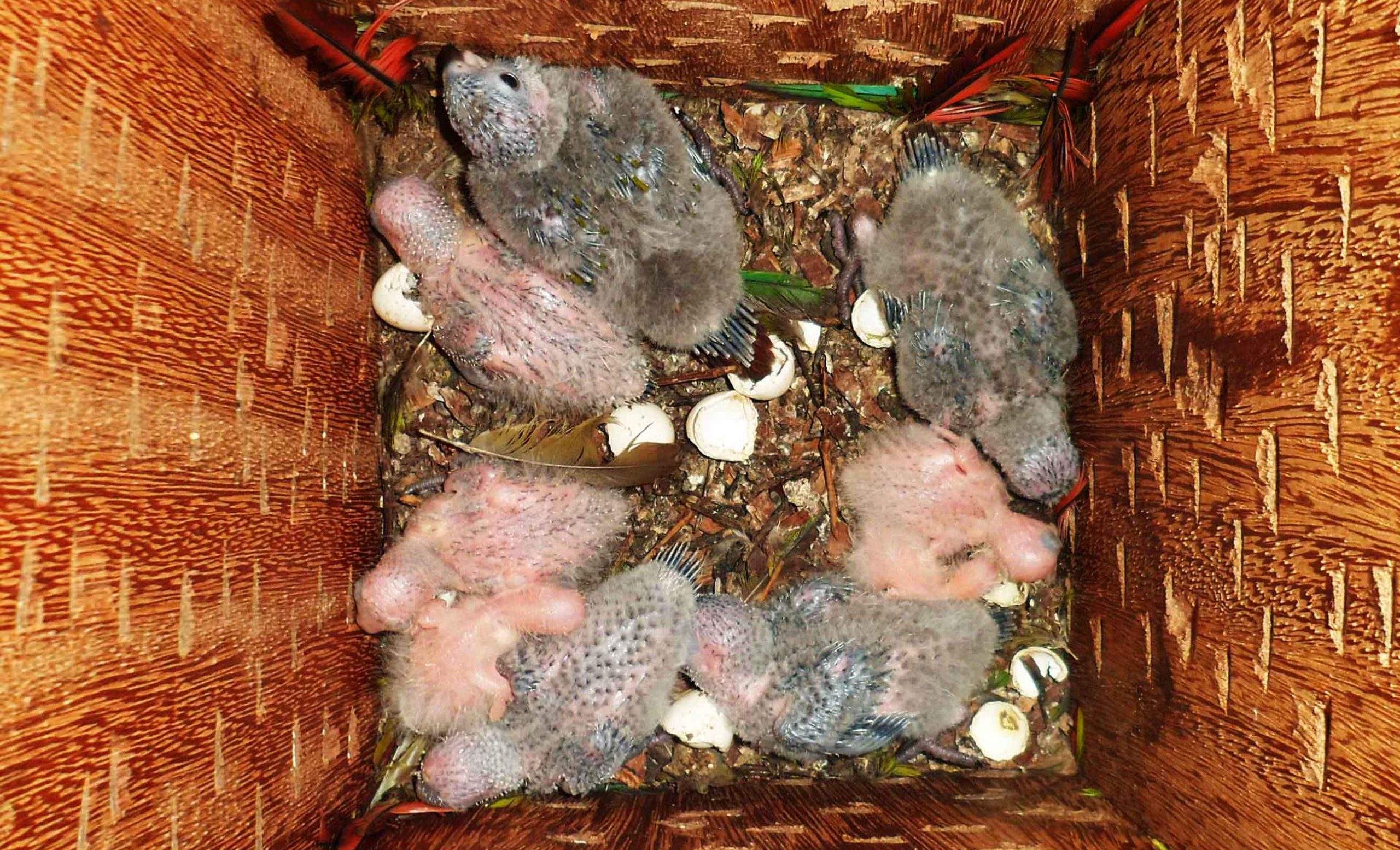 Grey-breasted parakeets successfully bred in the artificial nest boxes, leading to a huge increase in the population size and ultimately saved the species from extinction © AQUASIS/Fábio Nunes

Alberto is now pursuing a PhD at the University of British Columbia in Canada. “I started a PhD because I wanted to develop my long-term conservation vision into a large-scale rewilding project, supported by the best available science,” he explained.

Alberto’s PhD is focused on creating new approaches for nature conservation and landscape restoration, based on rewilding practices. Rewilding, in this context, means the reintroduction of locally eradicated species (and sometimes surrogates of extinct species) to restore ecological interactions, such as seed dispersal, pollination, and predator-prey mediation.

“My goal is to develop guidelines for informed rewilding, considering a wide array of social-ecological, ethical, and legal issues, their constraints and opportunities.

To develop rewilding guidelines – from species and site selection to monitoring and evaluation - I have started a collaboration with a large organic agricultural company to establish an experimental rewilding project in an 11,000-hectare farm in northeast Brazil, where fieldwork is now underway. Preliminary candidates for reintroduction are locally eradicated rheas, tortoises and armadillos.” 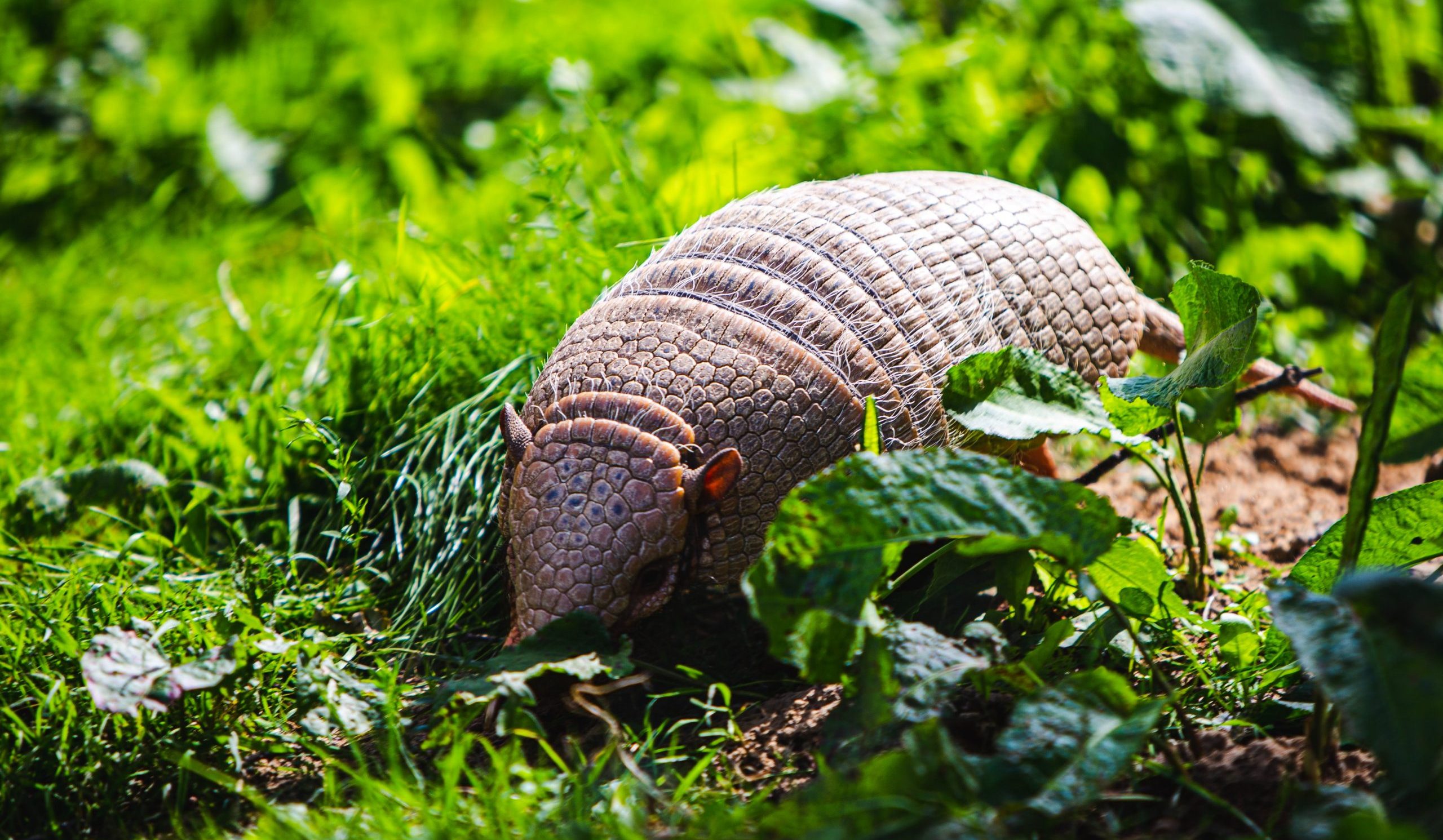 A sample of Alberto’s rewilding research and advocacy for more protected areas, which was recently published in a British Columbian newspaper, can be found here.

Along with his PhD project, Alberto is also planning and fundraising for his next long-term conservation project: to create a rewilding reserve in Brazil. His vision is for this rewilding reserve to provide monitoring and evaluation data for proper adaptive management, while creating a sanctuary for threatened Brazilian wildlife and perhaps a conservation training centre, depending on funding.

Lastly, what is Alberto’s advice for conservationists just starting out in their career?

“Be persistent. Especially regarding fundraising. It can be very frustrating to have more proposals rejected than accepted but, hey…that’s just the nature of fundraising. Make sure to ask for feedback on rejected proposals whenever possible. Improve your pitch and send it again.”

Are you an emerging conservationist inspired by Alberto’s story? Then why not apply for one of our Team Awards for a chance to gain project funding and access to training, mentoring, networking and other career-boosting opportunities?

The competition for our 2023 Team Awards is now open until 10 October, 2022 – but don’t delay – there’s a lot to do between now and the deadline! For more information, including eligibility criteria and how to apply, visit our Grants pages.

The stepwise funding and the long-term support are unique to CLP, and from my experience, makes it one of the most important conservation partnerships in the world. 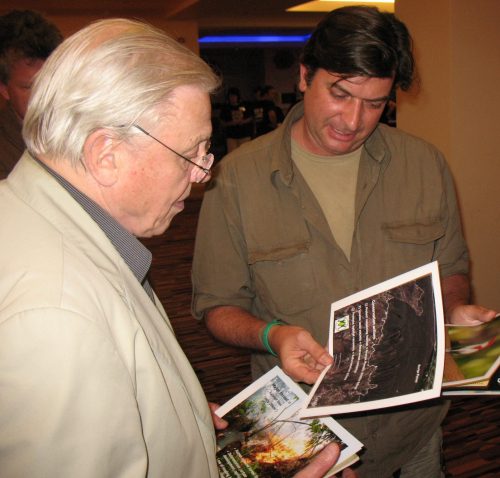