A team of CLP alumni has saved the grey-breasted parakeet from extinction. Back in 2012, a CLP-funded project reported alarming news: the last population of this Critically Endangered parakeet was now confined to a small region in Ceará State, north-eastern Brazil. With the species in grave danger of becoming extinct, the team launched a campaign that has seen the birds make a remarkable comeback from just three fledglings in 2010 to a cumulative total of 1,165 fledglings since then. Based on insights from team leader Fábio Nunes, below we tell the story of how this iconic Brazilian parrot was brought back from the brink. 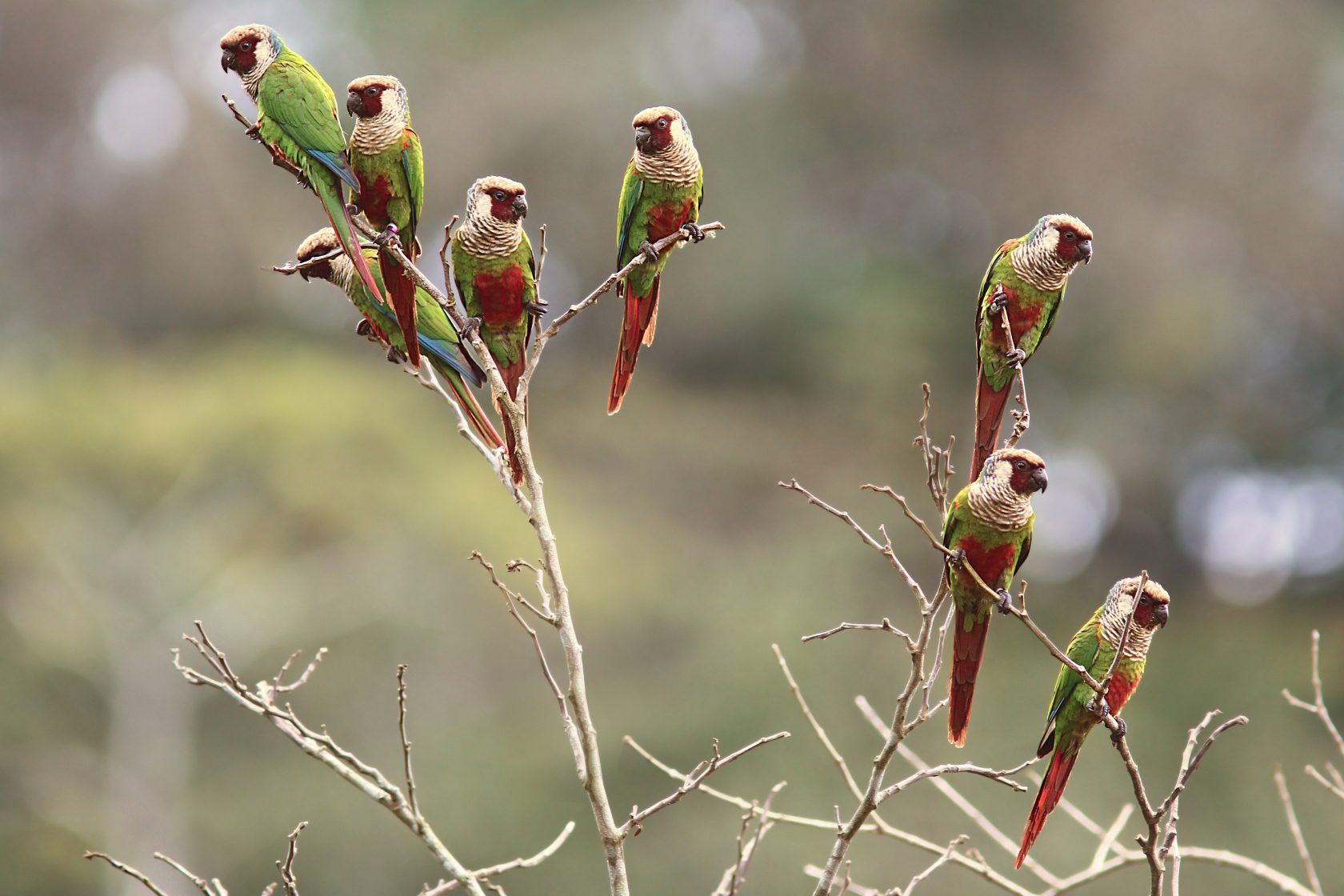 Grey-breasted parakeets were once widespread throughout the Atlantic Forest areas of north-eastern Brazil. However, ten years ago this flamboyantly feathered bird was facing a bleak future. Deforestation, illegal hunting and poaching by wildlife traffickers had caused severe population declines and local extinctions in at least 15 areas where it had historically been found.

In a quest to uncover the true range of the species, the 2012 CLP-funded project led by Fábio Nunes involved surveys over 4,000 kilometres of forest roads and trails and about 100 interviews with local residents in Ceará State. With the exception of the discovery of one small remnant population, they found no evidence of grey-breasted parakeets.

The results confirmed that the last remaining population was restricted to only two adjacent areas in the Baturité Mountains, with 80% of the birds found in just one of these sites. “These parakeets were facing a number of threats, including a highly restricted range, very little remaining habitat, few available nesting sites, and pressure from poachers seeking to snatch the chicks for the pet trade,” explains Fábio.

The alarming discovery ignited renewed efforts to save grey-breasted parakeets from extinction. It led to a government-led Conservation Action Plan for the species, and an international partnership between three NGOs (AQUASIS in Brazil, Loro Parque Fondación in Spain and ZGAP in Germany) went on to support Fábio’s next goal: to create the safe home that these birds so desperately needed.

Crucial in helping the parakeets recover was the provision of artificial nest boxes where they could breed in peace while being protected from poachers. In 2010, the team designed the boxes to mimic the parakeets’ natural nests, such as the depth, opening size and position. This seemed to do the trick—the parakeets have been successfully breeding in them ever since. 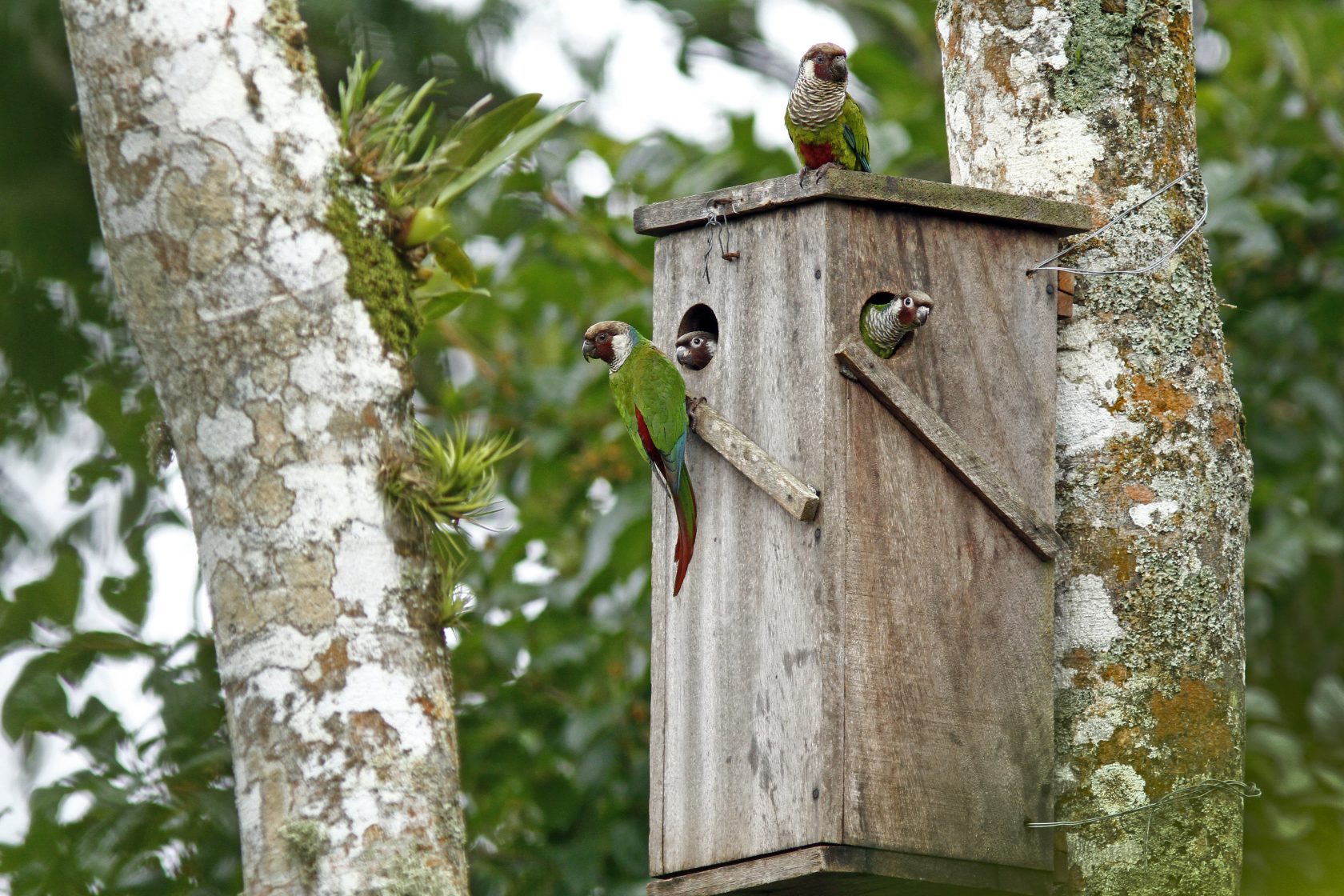 Another vital transformation happened among the local communities that live alongside the parakeets. The team formed partnerships with local residents who agreed to help them monitor the artificial nests on their properties and provide a round-the-clock watch against poachers. The team also formed Private Protected Areas and the Grey-Breasted Parakeet Wildlife Refuge (Refúgio de Vida Silvestre Periquito Cara-suja) to provide enhanced protection not just for grey-breasted parakeets but also for other endangered birds in the region. 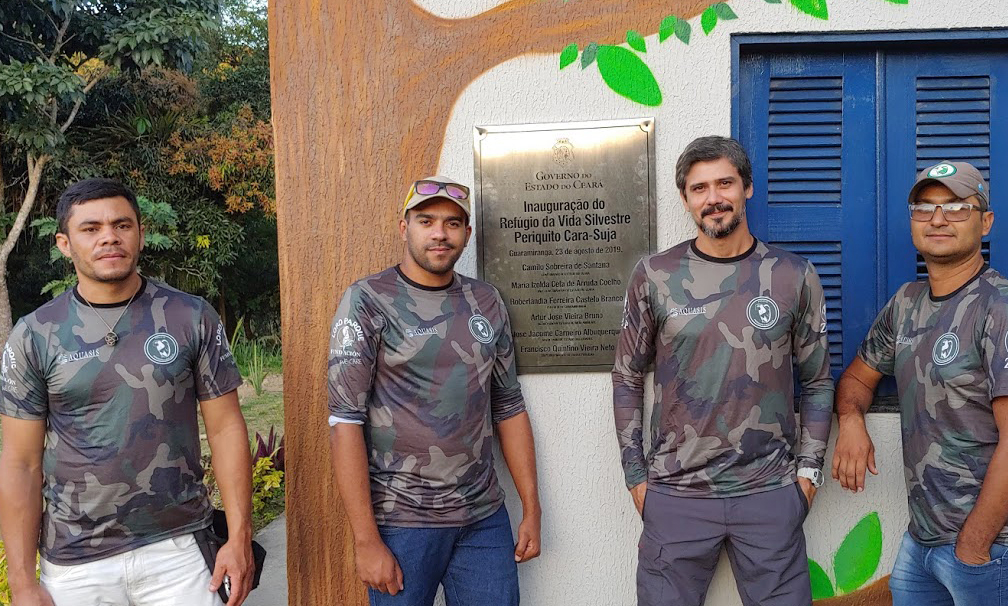 The team’s strategy has resulted in an extraordinary turnaround for grey-breasted parakeets. Just three fledglings had been recorded in 2010 when the first 30 nest boxes were installed. Since then, the number of successful fledglings has been steadily increasing each year, and the team has placed 70 more nest boxes to keep up with the growing demand. In a landmark achievement for the project, last year the cumulative total number of fledglings reached 1,165—an increase of about 130 fledglings each year, on average. Based on the growing population trend, the IUCN Red List reclassified grey-breasted parakeets from Critically Endangered to Endangered in 2017. 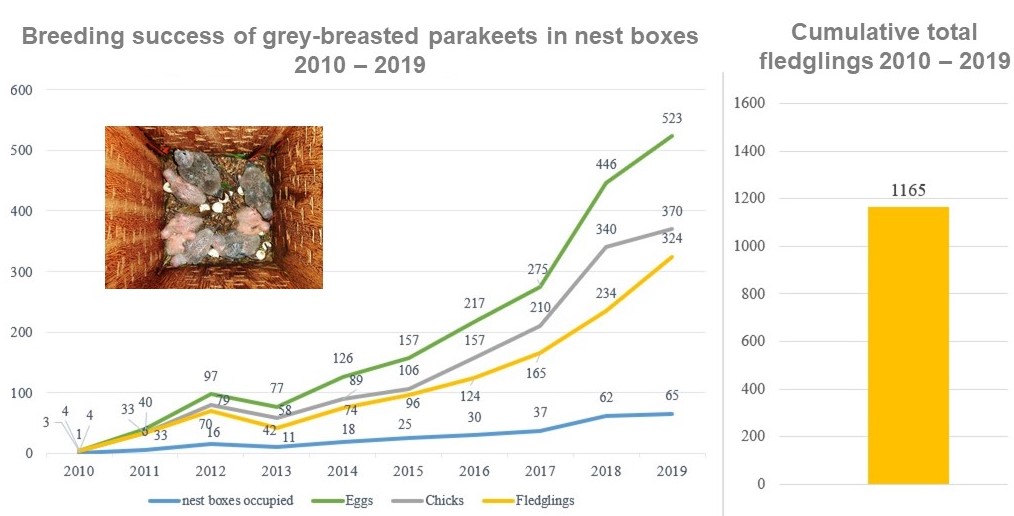 The AQUASIS Grey-breasted Parakeet Conservation Project has recorded a steady increase in successful fledglings since the nest boxes were first installed in 2010. Photo credit and permission to use data: Fábio Nunes.

New scientific insights from the project and the team’s involvement in the development of management plans and legislation will be critical in the future conservation of this exuberant parrot. However, according to Fabio, one key challenge in securing the safety of the species is to protect its forest habitat.

“Our dream is to bring the species back to the areas where it should never have disappeared and diversify the gene pool of wild populations,” says Fábio.

His plan, developed with his team, is to create more protected habitats, recover degraded forests, and ensure the parakeets can eventually survive without nest boxes—and ultimately use what he has learned from this incredible success story to help other endangered species in Brazil.

Fábio wishes to thank a number of other CLP alumni who have contributed significantly to the project’s accomplishments: Weber Girão, Alberto Campos, Bruno Lindsey and Ileyne Lopes. 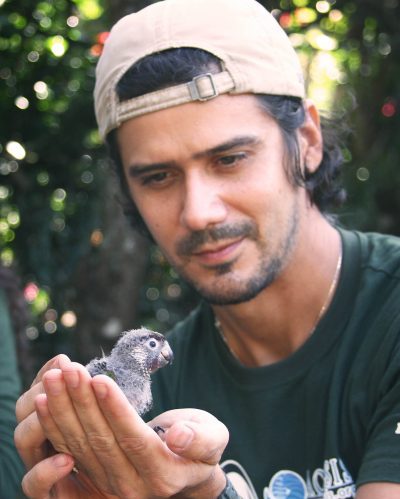