Awards for mpingo maestro are music to CLP ears 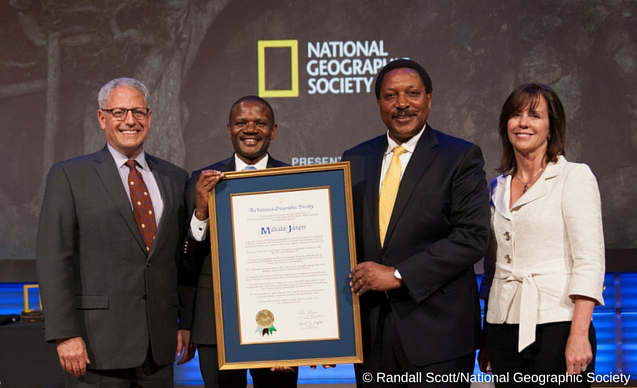 The head of one of Tanzania’s most successful conservation organisations, which grew out of an initiative launched two decades ago with CLP support, has won the 2016 National Geographic Society/Buffett Award for Leadership in African Conservation.

Makala Jasper, co-founder and CEO of the Mpingo Conservation & Development Initiative, was honoured for his ‘outstanding accomplishments’ at an awards ceremony attended by HE Wilson Masilingi, Tanzania’s Ambassador to the United States, at the National Geographic Society’s headquarters in Washington DC.

Established through a gift from The Howard G. Buffett Foundation to celebrate and recognise unsung conservation heroes, the award is given each year to two outstanding conservationists, one in Latin America and one in Africa. The foundation’s chairman, Howard G. Buffett himself, described Makala and his Latin American counterpart, Victor Zambrano, as “inspirational mentors and role models in their communities” and paid tribute to “two remarkable visionaries who are making such a positive difference to conservation in their countries.” 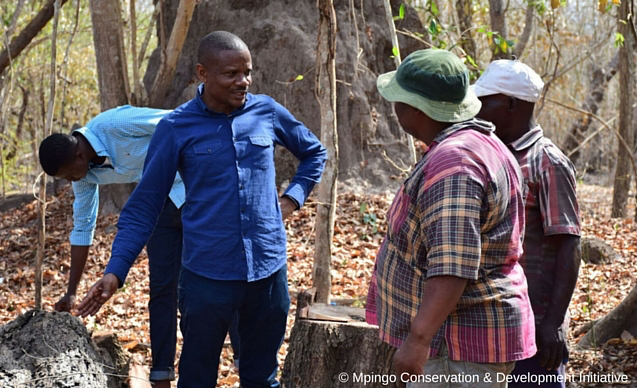 Gary E. Knell, president and chief executive officer of the National Geographic Society, hailed them as “powerful examples of how dedicated and passionate individuals can improve the world for all living things.”

“This year’s awardees are recognised for their outstanding leadership and the vital role they play in managing and protecting the natural resources in their regions. They are exemplary conservation advocates who often battle difficult odds with courage and commitment,” said Peter Raven, chairman of the National Geographic Society Committee for Research and Exploration.

The National Geographic Society/Buffett Award for Leadership in African Conservation comes hot on the heels of another prestigious prize for Makala. At the end of April, he attended a ceremony in London to accept a 2016 Whitley Fund for Nature Award, presented by HRH The Princess Royal. These awards, familiarly referred to as the ‘Green Oscars’, recognise the efforts of influential conservationists who use their research on threatened species to raise awareness about the issues they face and build lasting programmes to protect them. 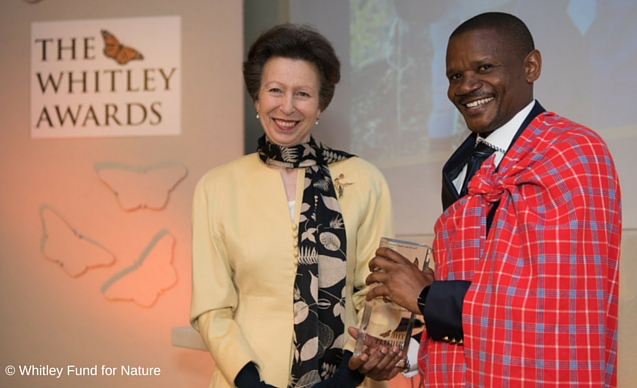 The Conservation Leadership Programme (CLP) has a long association with Makala and his work. In 1996, it supported a team carrying out vital research on the African blackwood or mpingo, a highly prized timber species that was threatened with commercial extinction as a result of overharvesting to supply the musical instrument trade.

With CLP alumnus Makala at the helm, the organisation is protecting biologically rich miombo woodland and other threatened forest habitat in East Africa by promoting sustainable and socially equitable harvesting of valuable timber stocks and other forest products. Addressing environmental, economic and social issues holistically, it has, to date, provided support to over 55,000 people in 37 impoverished rural communities, and has helped to secure user rights to more than 300,000 hectares of forested habitats. 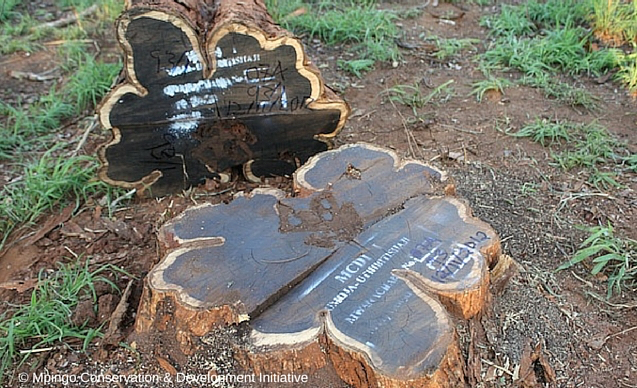 MCDI currently holds the only Forest Stewardship Council certificate in Africa for community-managed natural forest. To date, these community forests have earned local people more than US$265,000 in sustainable hardwood timber sales, and income continues to increase. Revenues have been used to improve the livelihoods of local people – including the most marginalised members of those communities – by, for example, creating new water boreholes, building schools and improving village medical care.

This prestigious award will undoubtedly raise the profile of Makala’s work. It will also provide vital financial support for future projects in the form of a US$25,000 grant and help him to continue developing the programme to conserve Tanzania’s forest and woodland habitats.

The Whitley Award, worth £35,000, will also open up new avenues for his organisation: “It means MCDI will expand its work to an entirely new area – the first step to connect existing community forests and their wildlife with one of Africa’s largest protected areas.”

Makala Jasper was not the only CLP alumnus to receive a Whitley Award in 2016. Among the other winners presented with their awards in front of Sir David Attenborough and over 550 assembled guests at London’s Royal Geographical Society were Gilbert Baase Adum and Alexander Rukhaia. 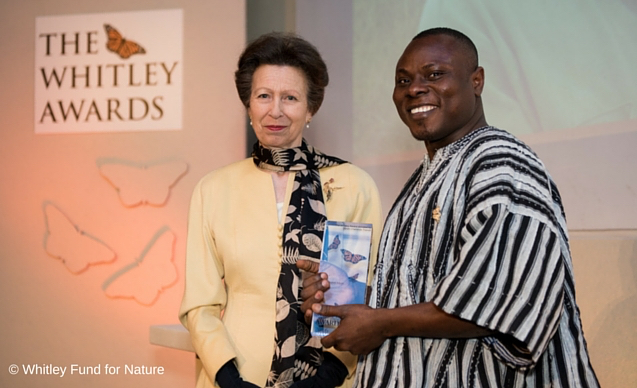 Co-founder of SAVE THE FROGS! Ghana – and a recipient of a 2013 CLP Future Conservationist Award, Gilbert Adum turned down the opportunity to pursue a career in medicine, preferring to dedicate himself to the conservation of endangered West African amphibians including the giant squeaker frog, which was rediscovered by his team in 2009. 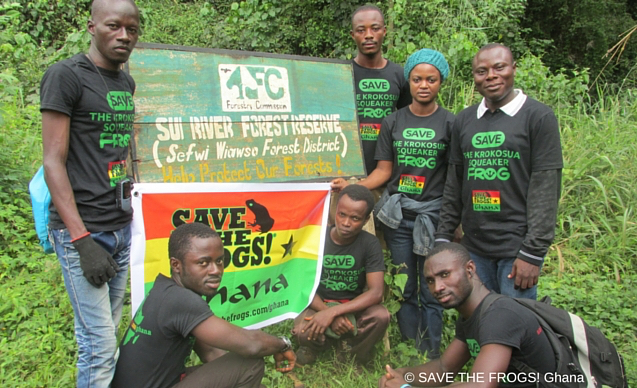 Alexander Rukhaia, a 2016 CLP Award winner and the first Georgian ever nominated for a Whitley Award, is working with local communities in his home country to change attitudes to migrating raptors that are traditionally shot or captured for falconry as they pass through the so-called Batumi Bottleneck. 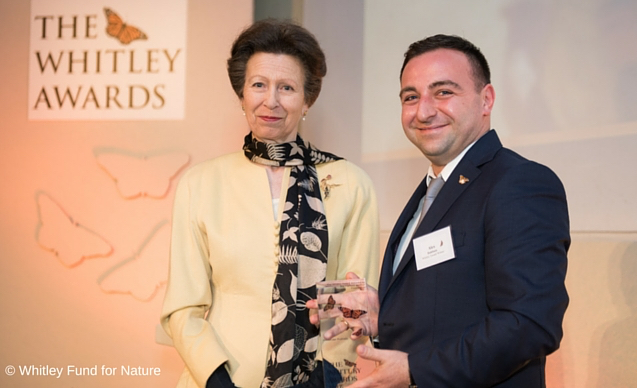 Makala, Gilbert and Alexander are the latest in what is already an impressive list of CLP alumni who have received wider recognition in 2016. We look forward to celebrating further successes as the year unfolds. 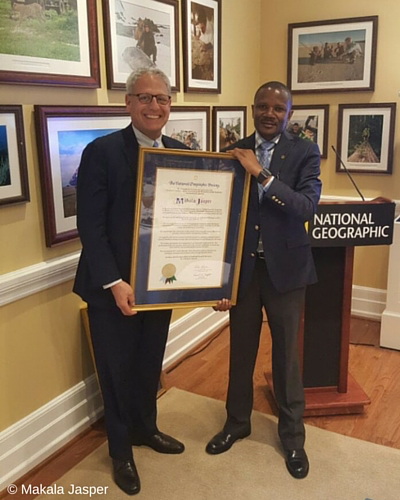