Home > Media Centre > News > Back from the dead

Back from the dead

Lost & Found is a digital project that brings to life the incredible stories, and years of hard work, that lie behind the rediscovery of species thought lost to extinction.

Recognising the power of a good story, Diogo Veríssimo decided to shake up the frequently negative conservation narrative by starting a new digital project. ‘Talking about nature has too often become about extinction, decline and loss. With Lost & Found we aim to make it about hope, determination and passion,’ says Diogo, a biologist turned social marketer.

Lost & Found’s stories, comics and videos aim to capture people’s imagination, and draw them in to the adventure, dedication and often sheer luck that’s involved in the rediscovery of species such as the golden-fronted bower bird, the Bermuda petrel, and Bulmer’s fruit bat, which were found after being thought extinct for 86, 330, and 10,000 years respectively.

Diogo was part of a team that received a Conservation Leadership Programme (CLP) award in 2007 for a project engaging communities in conserving lesser floricans in central India, and for a sustainable logging project in São Tomé in 2014. CLP funding has also enabled him to conduct two learning exchange visits to Brazil to mentor others on environmental education and flagship species selection. He turned to marketing and its potential to influence human behaviour — something he explored in depth during his PhD and postdoctoral research — when he ‘realised biodiversity conservation was essentially about people and the choices they make.’

One of the first species included in the Lost & Found project also has a CLP connection. The woolly flying squirrel was rediscovered after a two-year search in the mountains of northern Pakistan by Peter Zahler, a member of CLP’s Executive Committee. Peter is Director of the Wildlife Conservation Society (WCS) Training and Capacity Building Program and Senior Advisor for the WCS Asia Program. His experiences in Pakistan led him to establish the WCS Pakistan Program in 1997.

The story is an intriguing one, as this extract reveals:

‘As they entered the valley, they encountered some police who asked to know their business. Peter told them that he was trying to find the squirrel, called ‘rock butter’ in the local language, at which point they started to chuckle…Peter had been told many myths about the squirrel, and lumped this in with the others – the others that said that the squirrel milked goats at night and hung upside down in caves like a bat…’

The full story of his hunt for the woolly flying squirrel can be found here.

This article was written by Claire Salisbury. 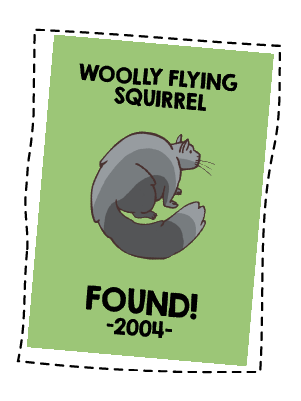