A team of young researchers from Colombia have recently published an article in the journal Zootaxa describing two new species of salamander discovered during a project supported by the Conservation Leadership Programme and Save Our Species.

The two new salamanders belong to the genus Bolitoglossa, otherwise known as tropical climbing or web-footed salamanders. One of the salamanders (B. leandrae) has been named after an 11-year old girl who became friends with the team whilst they conducted their fieldwork. “Leandra grew fascinated by the world of amphibians,” explains team leader Aldemar Acevedo. “She was eager to learn about our work and became an excellent spokesperson for nature conservation among the community.”

Bolitoglossa leandrae is a relatively small salamander (its body length is roughly the same as the diameter of a 50p or a Quarter coin) with a narrow head and long, slender tail. Males are dark brown with thin yellow stripes along the length of the body and females are reddish brown.

Bolitoglossa tamaense is slightly longer than B. leandrae (the body of the longest specimen measured approximately the same as the height of a credit card) and has a broad head and relatively long body and legs. A number of different colourations and patterns were recorded, but the body is generally brown or dark red, and the tail and limbs can be dark brown, red, orange or yellow.

The new findings were made during the first amphibian census to be carried out in Tamá Bi-National Park which straddles the Colombia-Venezuela border. In addition to the two new species, the team recorded three Pristimantis species that had not previously been found in Colombia, and eight other species that are new records for north-east Colombia. In total, the team recorded 34 amphibian species, up from just five species previously recorded in the area.

In their journal article, the authors highlight the need for more field and lab-based research to improve our understanding of amphibian diversity, and for more practical conservation projects to take place in the region. “For decades, the natural landscape of Tamá Bi-National Park was subject to deforestation, agricultural pressures and illegal crop-growing so during our project we began working with local communities and environmental organizations to encourage good land stewardship and the development of adequate conservation plans” said Aldemar. “Local communities have responded to our call and we are starting to see a decrease in deforestation, especially in forest patches inhabited by Bolitoglossa leandrae”.

It’s not all good news, however, as the team detected chytridiomycosis (a virulent fungus which kills off amphibians) for the first time in north-east Colombia and it was found on 23 of the park’s 34 species. If left unchecked, this could result in population declines and perhaps even local extinctions. To try and control the rapid spread of the fungus, the team ran several biosafety workshops for rangers and community members. In the future, the team plans to conduct further research to measure the success of their biosafety workshops and they are currently looking for funding to kick-start reforestation programmes in areas of would-be suitable amphibian habitat. 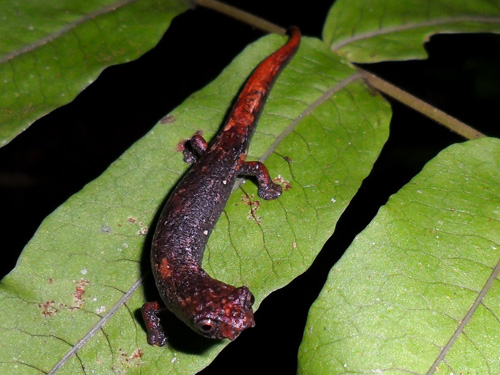