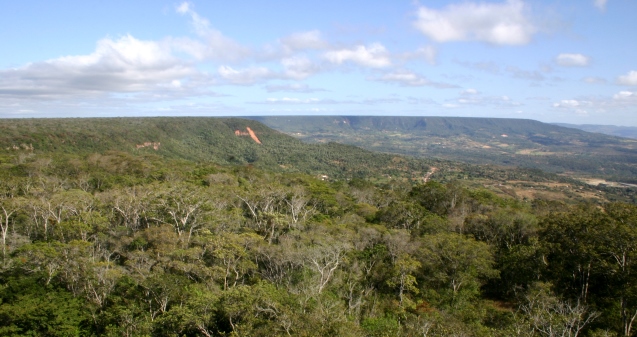 CLP has been supporting a team of conservationists working to protect Araripe manakins in Brazil since 2004. Working at Brazilian NGO, Aquasis, the team has helped to safeguard the future for this rare and unique bird and protect its nesting habitat. Some of their work can be seen in this short video. The CLP report mentioned in this article is the team’s final report corresponding to their 2007 Follow-up Award funded by CLP. Information on their two other CLP-funded projects can be found on the CLP website

In an 11-square mile strip of forest on the slopes of a plateau in northeastern Brazil lives an entire species, considered by scientists to be one of the most endangered birds in the world. Now, 18 years after it was first discovered by scientists, conservation groups have acquired 140 acres of land to establish the first-ever reserve for the Araripe manakin.

Six inches long with striking red, white and black feathers, Araripe manakins (Antilophia bokermanni) are found in forests near streams and springs along the Chapado do Araripe, a plateau with humid forest surrounded by a vast, dry landscape. Endemic to the region, the Araripe manakin was Brazil’s first species to receive a National Conservation Action Plan, making it a national symbol of conservation.

Censuses conducted in 2010 showed that there are about 800 Araripe manakins, all living within Brazil’s Chapado do Araripe. Because of its very restricted range, the IUCN lists the species as Critically Endangered.

Human encroachment is a major threat to the species’ continued survival. Conservation Leadership Programme (CLP) reported in 2009 that among the human activities detrimental to Araripe manakins are forest fires, clearing of forests for agriculture – particularly for planting banana, maize and beans – and the conversion of springs to recreational facilities such as water parks. Other factors threatening Araripe manakin habitat include urbanization along the slopes of the Araripe plateau and landslides linked to heavy rainfall and deforestation, according to a CLP report.

The CLP report mentions that while much of the manakin’s habitat is legally protected, enforcement of those protections is lax. Calls to establish a permanent protected area for this species started in 2008, but it was not until late 2014 that Brazilian NGO Aquasis and bird conservation group American Bird Conservancy (ABC) were able to purchase suitable land for this purpose.

“After 10 years of mapping the remaining habitat of the Araripe Manakin, we were confident enough to select properties that have all the desired features for this type of reserve: permanent springs and streams with prime nesting territories; good quality moist forest habitat; and good neighbours with excellent connectivity potential,” Aquasis director Alberto Campos said in a press release.

According to Birdlife International, the purchased land was previously allotted for “sustainable use,” a categorization that made protection more challenging.

The 140-acre parcel that Aquasis and ABC acquired is connected with the state-managed Sítio Fundão State Park, and borders Araripe National Forest to the south. An adjacent landowner agreed to full protection for 27 acres of his land. Aquasis is also in discussions with another nearby landowner to expand the reserve a further 60 hectares (148 acres).

In addition to the land securement, ABC and Aquasis have made strides in reforesting disturbed areas of the Chapado do Araripe, with more than 4,500 native seedlings planted as of December 2014, and more planned. According to ABC, these conservation efforts will help preserve not only the Araripe manakin, but also other species that share its restricted habitat, such as the silvery-cheeked antshrike (Sakesphorus cristatus) and the white-browed antpitta (Hylopezus ochroleucus).

This article was originally published on Mongabay.com. It was written by Shaira Panela and produced as part of The Global Forest Reporting Network, which is a joint effort between Mongabay.org and World Resources Institute (WRI) that sources data-driven, forest-focused stories from an international network of journalists. 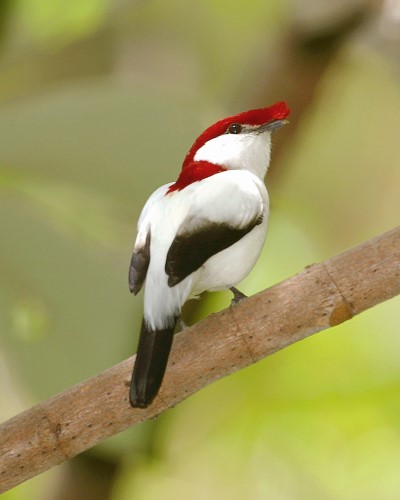