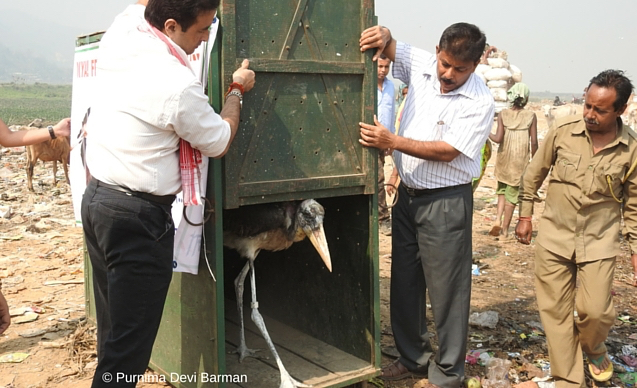 A rescued greater adjutant chick has been released back into the wild after a period of rehabilitation in India’s Assam State Zoo. The chick was critically injured when it fell from its treetop nest in February, but has slowly been nursed back to health.

The greater adjutant is an Endangered giant stork with an estimated global population of around 1,000 individuals. It is confined to Assam and Bihar in India and Prek Toal, a bird sanctuary in Cambodia’s Tonlé Sap Biosphere Reserve.

The Indian district of Kamrup, where the release took place, harbours over 50% of the greater adjutant’s global population and the co-operation of local communities is therefore vital to the long-term survival of the species.

Thanks to the efforts of Purnima Devi Barman and her CLP-funded conservation team, villagers have begun to take this visually unprepossessing stork to their hearts, recognising that it is a privilege to have such a rare and iconic species on their doorstep. 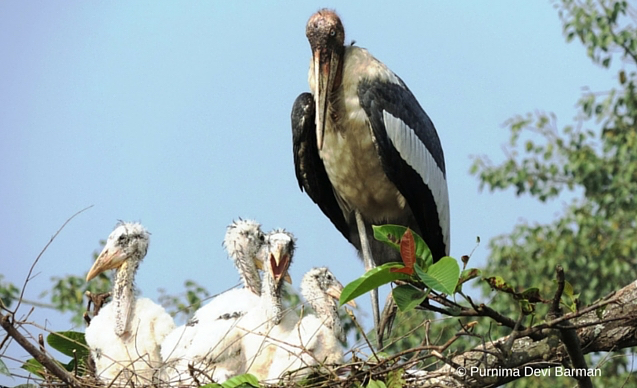 A garbage dump in Guwahati provided the unromantic setting for the release of the rehabilitated stork, which was reunited with around 300 other birds that make up the world’s largest nesting colony of the greater adjutant.

The release was the culmination of a tremendous collaborative rescue effort involving staff from Assam State Zoo, the forestry department, the environmental NGO Aaranyak, and Kamrup District Administration. The chick suffered life-threatening head and leg injuries after falling 75 feet from its nest just one month ago. After villagers alerted them, Aaranyak staff rescued the hapless bird with the help of local forest rangers. As the chick’s condition was critical, it was transferred to the hospital at Assam State Zoo where it received life-saving emergency medical care.

Parth Sarathi Mahanta, who has helped Aaranyak with several similar rescues in previous years, remarked: “Hargila [the Assamese name for the greater adjutant] is the pride of Assam, just like the rhino, and releasing one individual into the wild also makes a big difference to such an Endangered species.” 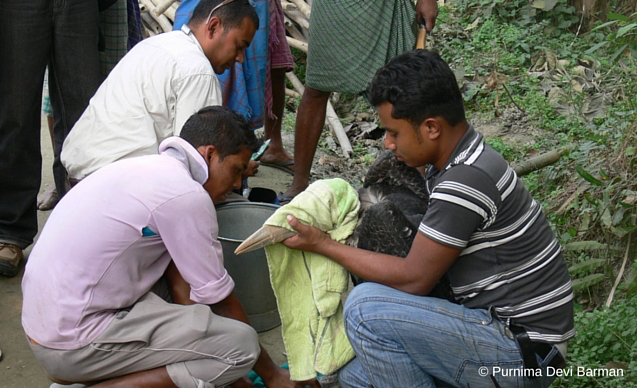 Kamrup District Administration has supported Aaranyak’s conservation efforts by providing 120 safety nets to fit as a precautionary measure beneath the towering kadam trees favoured as nest sites by the greater adjutants, in order to break the fall of any over-adventurous nestlings.

The rescued chick was named Diya, after a four-year-old local girl, Diya Darshana Kashyap, who has been devoted to helping greater adjutants ever since she first noticed them nesting in one of her uncle’s kadam trees and was told about the species’ plight.

Diya was there to witness the release of her namesake, accompanied by her parents, who view their daughter’s interest in the giant storks with a mixture of surprise and pride: “We have two kadam trees in our backyard, and she keeps her eye out in case any storks fall from the nest. She says she wants to be a greater adjutant researcher after seeing Aaranyak staff working for the species.”

Purnima Devi Barman, coordinator of the Greater Adjutant Conservation Project at Aaranyak, is increasingly optimistic about the future of Diya and her fellow giant storks. Her team has been working to conserve the greater adjutant, with CLP support, for over seven years. During that period, the Kamrup population has increased considerably.

As Purnima is quick to acknowledge, this would not have been possible without widespread local cooperation: “The community is the key player for the conservation of this endangered bird, as it primarily takes shelter in privately owned nesting trees. Only with the nest tree owners’ support can we save this bird from the threat of extinction.” 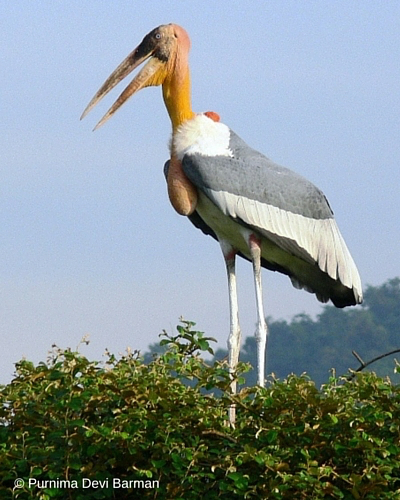