This story was originally published by Fauna & Flora International on March 4th 2015. Written by Sarah Rakowski. 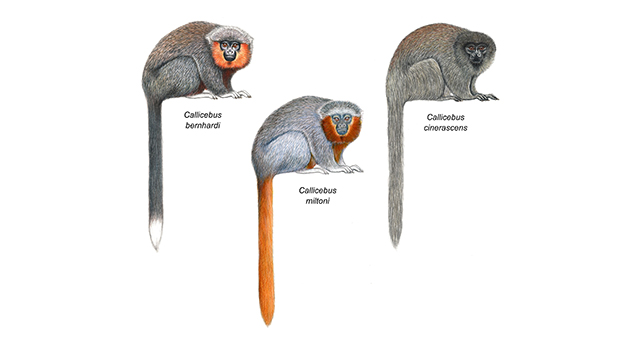 Scientists have discovered a new species of titi monkey in Brazil, according to a recent paper published in scientific journal Papéis Avulsos de Zoologia.

Titis are new world monkeys found across South America. These tree-dwelling primates have long, soft fur and live in small family groups consisting of a monogamous pair and their offspring. Rather touchingly, they are often observed sitting or sleeping with their tails entwined.

In 2011, researcher Julio César Dalponte spotted an unusual looking titi monkey on the east bank of the Roosevelt River, whose colouration did not match any known species. Intrigued, a team of scientists supported by the Conservation Leadership Programme (CLP – a partnership between three NGOs, including Fauna & Flora International) headed back into the field to collect the information needed to formally describe what they believed to be a new species.

Over the course of a number of expeditions, the team recorded several groups of these unusual monkeys, whose ochre sideburns, bright orange tail and light grey forehead stripe set them apart from other known species in the genus.

Based on these morphological differences, scientists were able to formally describe the monkey as a new species, which they have named Callicebus miltoni (or Milton’s titi monkey) in honour of Dr Milton Thiago de Mello, a noted Brazilian primatologist who is credited with training many of the country’s top primate experts.

Found in a small area of lowland rainforest south of the Amazon River in Brazil, Milton’s titi monkeys spend most of their time in the upper reaches of the forest, where they feed on fruits.

Like their close relatives, they live in small groups consisting of a mated pair and their offspring. These groups are territorial and use warning calls to keep others at bay – they are particularly vociferous early in the morning and during the rainy season.

Because they are not able to swim or cross mountainous terrain, these monkeys are restricted to a small area, effectively hemmed in by a number of rivers and hills. This small range could put the species at risk from human activities, particularly because only around a quarter of this area is protected.

Deforestation rates are high in this region, with forest fires also posing a significant threat. Added to this, the Brazilian Government’s ongoing development programme includes several new hydroelectricity dams and an extension of the road system planned within the Amazon.

“It goes without saying that we are really excited about this new discovery,” said researcher and CLP alumnus Felipe Ennes Silva, who collected the data for the new species description. “It is always thrilling to find something new in the Amazon, as it reminds us just how special this rainforest is and how lucky we are to have it on our doorstep.

“But it will take more than luck if we are to keep making scientific finds like this. The rainforest is under threat like never before, and it will take dedicated, hard work – not just by conservationists but by the government and every other sector of society too – to make sure that this forest ecosystem can continue to support a wide diversity of life and help regulate our planet’s climate.”

For more details about this discovery, or to find out how to get copies of the images, please read the press release (PDF). 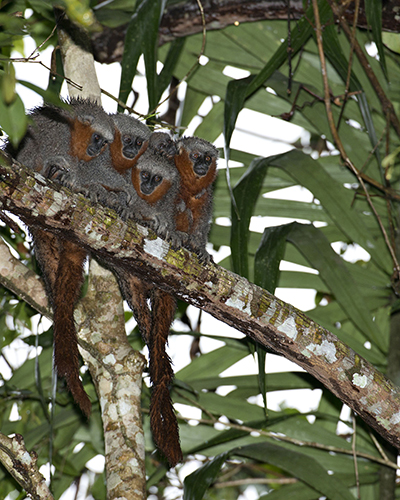