A team of young conservationists in Ceará state, north-east Brazil, has discovered a small population of five grey-breasted parakeet (Pyrrhura griseipectus). Less than 200 grey-breasted parakeet are known to survive in the wild – all in Ceará state. These rare birds are listed as Critically Endangered on the IUCN Red List and face immediate threats such as trafficking for the pet trade and habitat destruction. The newly discovered birds represent the third remnant population out of 15 populations which were previously known to exist – the other two reside in Serra do Baturité and Quixadá.

The team, employed by Brazilian NGO Aquasis, was granted a Conservation Leadership Programme (CLP) Future Conservationist Award in 2012. CLP funding allowed the team to conduct several research expeditions with the aim of finding new populations and improving knowledge about the parakeet’s range.

“Last year, as part of our CLP-funded project, we found clues suggesting the presence of this species in an isolated mountain, and it was only in March that we were able to confirm and document the finding,” said Fabio Nunes, project leader. “This discovery could be a new hope to add to the existing conservation efforts led by Aquasis and its partners.”

Usually, the grey-breasted parakeet lives in tropical forests, nesting inside tree hollows. Yet on this occasion, the five individuals were found in a nest located in a small cavity on top of a rocky mountain, above dry vegetation known locally as Caatinga.

The discovery of a new population is excellent news, but the grey-breasted parakeet faces an uphill struggle. Having been left in isolation for so long, the genetic make-up of the new population may be different enough to suggest that uniting populations may be problematic and risky. The team is now writing a scientific paper to emphasise the importance of this discovery for the survival of the grey-breasted parakeet. Future conservation efforts will focus on environmental education, and direct species and habitat conservation activities led by Aquasis and supported by CLP, BirdLife International and other donors. 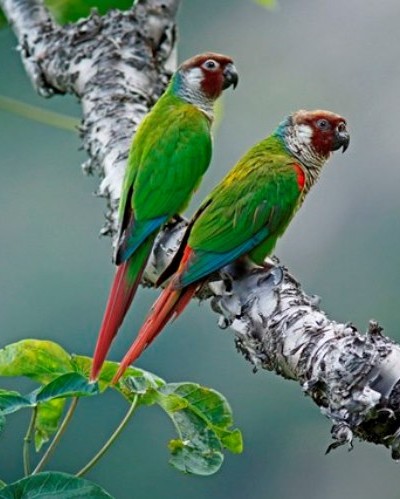