Turtle be my valentine

We all know the fairy-tale about the Princess and the Frog. Well here’s a story to warm the heart of even the most cold-blooded reader. This Valentine’s Day (14th February) a team of young Belizeans came across the Critically Endangered hicatee, otherwise known as the Central American river turtle (Dermatemys mawii). For many of the team, this was the first time that they had seen this rare turtle and it was the first time that one had been encountered in Rio Grande.

Having captured the turtle in a trammel net, the team set about fixing a radio telemetry tag to its carapace in order to track it over the coming months. “This is an important find and we expect to learn a lot about the turtle’s behaviour, home range and feeding grounds,” said team leader Elmar Requena. “We will share the research results with communities, non-governmental organizations and government departments so that everyone can come together to protect the hicatee in Belize.”

During the capture of this first turtle, team member Mary Alvarez said “I’ve never seen a hicatee in my life and now I get a hicatee for Valentine’s Day!”

To complete this romantic tale, the team decided to name the tagged turtle “Huberta” – a perfect companion for “Hubert the Hicatee” which is the mascot being used to raise awareness about the project in Belize.

Species fact: The hicatee is the only species in the family Dermatemydae. Spending almost its entire life in the water it is vulnerable to water pollution but its main threats are from habitat destruction and hunting. These freshwater turtles have a brown, grey or olive shell. Females have an olive head whereas males have a bright yellow head. They survive in Belize, Honduras and Guatemala and have almost been hunted to extinction in Mexico.

This project is funded by CLP, the Toledo Institute for Development and Environment (TIDE), the Ya’axché Conservation Trust and the Belize Fisheries Department. 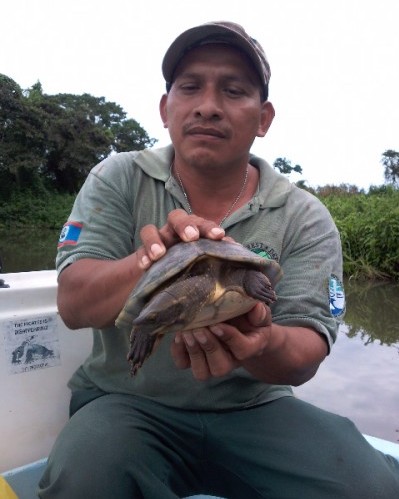