Preventing the extinction of the Critically Endangered blue-throated macaw

The blue-throated macaw's adult population is assumed to range between 73 and 87 pairs. Though this estimation is not supported by objective population censuses, there is reason to believe the population is small. The entire species distribution of the Critically Endangered blue-throated macaw is located in private lands where extensive cattle ranching is practiced. Provoked fires to renew pastures are not contained, and therefore the island forests where this species breeds are frequently burnt. Population recruitment, and thus the future of this species, is compromised by the destruction of the primary reproductive habitat for the blue-throated macaw. Through this project we aim to estimate the global population of this species by conducting a systematic population census throughout its distributional range. This will help us to identify areas where the largest groups are located, as well as key reproductive sites. We also aim to increase the reproductive rate of blue-throated macaw through the installation of artificial nests in key sites protected from fires. Through these activities we hope to increase the chances of long-term survival of this critically endangered bird. 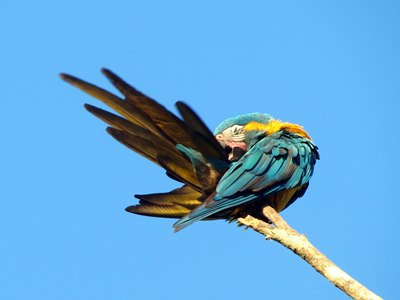