The greater adjutant stork is the most threatened stork in the world and its population is decreasing. Many historic breeding colonies of this colonial nesting bird are missing now and the bird is probably facing extinction threat. Brahmaputra valley in Assam is considered as the last stronghold for Endangered greater adjutant and supports more than 90% of its global population. It is now utmost important to know the current population scenario of the bird to initiate conservation measures and habitat recovery plans. The present project is aimed to initiate greater adjutant conservation programmes across the entire distribution range in Assam and, based on results and recommendations of a previous project, the team will involve communities and help policy makers to improve and secure its conservation status. The current project will concentrate on the entire distribution range of greater adjutant in Brahmaputra valley of Assam, India. Community based organisations will help to collect information on the species, spread conservation awareness messages to the masses and for save nest fall chicks in the nesting colony areas. A long term conservation action plan will be prepared and published to support existing government conservation initiatives so that the population decline can be stabilised. 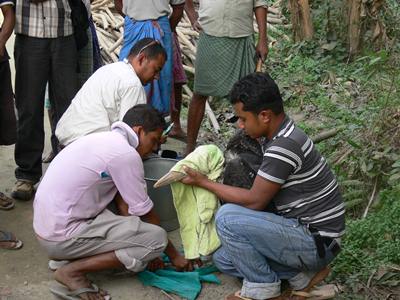