The Togo slippery frog (Conraua derooi) is an evolutionary distinct and Critically Endangered frog known to occur in only two isolated sites: The Atewa mountains and the Togo-Volta Hills. Previous conservation efforts have focused on the Atewa mountains, however, due to an ongoing mountain-top removal bauxite mining, the persistence of this frog population in the Atewa mountains can no longer be guaranteed. This project aims to secure an alternate viable wild population of this frog in the Togo-Volta hills by curbing widespread human consumption and restoring degraded habitats whilst concurrently monitoring the impact of ongoing mining activities on the Atewa mountains population. Time-tested conservation interventions including behaviour change education, provision of alternative livelihood options and capacity building among local conservation personnel will be implemented. Important outputs are the restoration of 10 hectares of degraded riverine forest habitat, a species status review report, the establishment of the first amphibian capacity-building training centre and at least 15 amphibian conservation clubs in local schools. 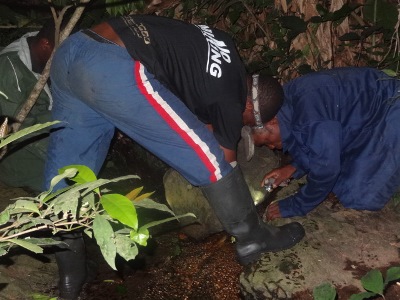