The Togo slippery frog is a high priority Evolutionary Distinct and Globally Endangered (EDGE) amphibian endemic to few sites in Ghana and Togo. Rapid forest loss, human consumption, and the pet trade have pushed this species to the very brink of extinction. Previous projects have worked with communities in Ghana to reduce frog consumption, legally protected some of the last remaining habitats of the frog, and began a large-scale restoration program. However, all of these conservation efforts have focused on the frogs’ population in Ghana. The Togo population remains unprotected. A recent study revealed an over 50% decline in the Togo population in just 2-years (Ségniabgeto et al. 2017). To minimize extinction risk, it is imperative to mitigate ongoing declines in Togo whilst sustaining the Ghana population. To realize this goal, this project will expand previous conservation work from Ghana into neighboring Togo. Specifically, the team will identify and map all remaining suitable habitats for the species, document threats and causes of population declines, and engage stakeholders to curb these threats. Information gathered from field activities will be used to develop the first range-wide conservation action plan and prioritize sites for protection. To ensure long-term commitment to the species conservation in Togo, this Leadership project will build local capacity in amphibian conservation and establish a new conservation NGO. 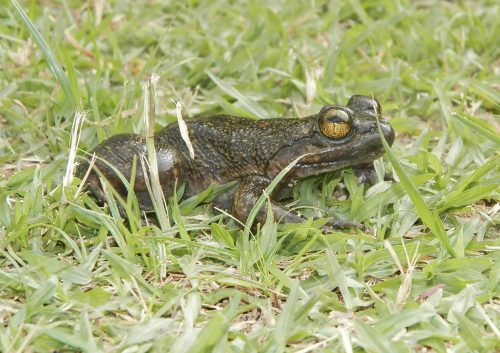