Home > Media Centre > Blog > In Borneo, building a nest box — and a future for conservation

This blog has been adapted from a version originally published on the Mongabay website, which can be found here.

The Kinabatangan Wildlife Sanctuary in Borneo is a regenerating forest, home to eight species of hornbills including populations of the Critically Endangered helmeted hornbills and Near Threatened rhinoceros hornbills. The loss of suitable natural cavities for these hole-nesting, large-bodied birds is one of the key reasons for their decline. Luckily, a team of CLP alumni has intervened to provide a safe home for these extraordinary birds using artificial nest boxes. In a recent trip to the area, I had the privilege of seeing the team at work—and what an eye-opening experience it would turn out to be! 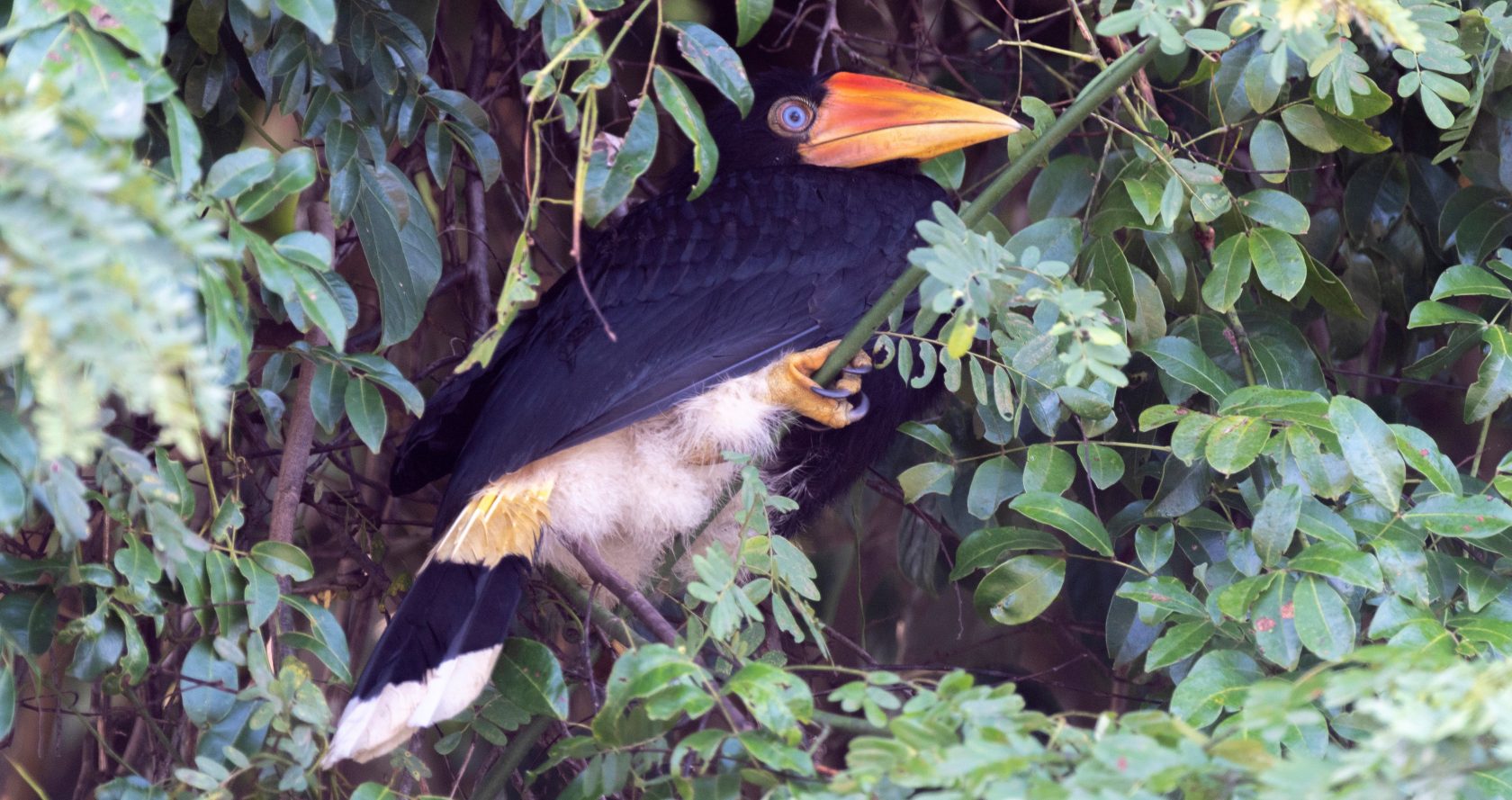 I wish I could tell you this reflected their thriving populations. In fact, the narrow strips of land that abut the river are the last remaining forest patches in the area, loosely protected from expanding palm oil plantations. There is nowhere else for the animals to go.

It was with mixed emotions that I visited the river in July 2019, hoping to see the Big Five for myself. While I didn’t see them all, I did get to witness something even more inspiring: a team of rising conservation leaders that has worked tirelessly and with abundant creativity to create more space for these amazing animals.

The core team for the group I visited in Sabah, Malaysia on the island of Borneo are a trio of CLP alumni working to conserve hornbills. The team was originally granted a Future Conservationist Award in 2017 to help improve breeding opportunities for hornbills. Along with support from the Sabah Wildlife Department and Sabah Forestry Department in Malaysia, the team used the CLP grant to design nest boxes that mimic the natural nest cavities that these birds need for breeding. 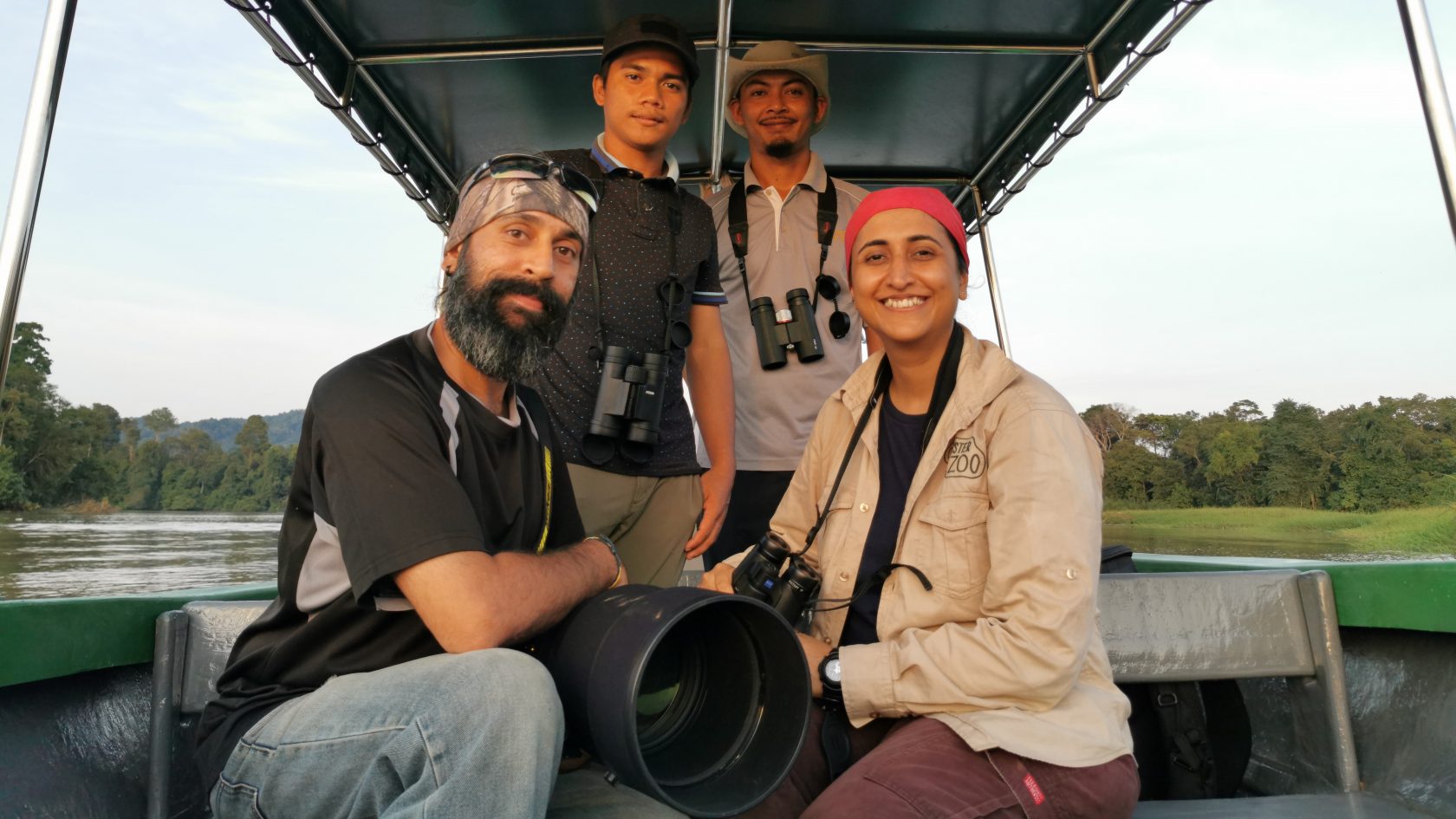 Building the foundations for hornbill conservation

The team shares responsibility for monitoring hornbill nests eight hours a day, six days a week. They track what and when the hornbills eat, how long the male spends at the nest cavity (where the female and chick are almost completely encased), when the chick hatches and fledges, and more.

This data is collected in silence in cramped, hot, and humid conditions. Mosquitoes are everywhere. The team knows the work is hard but the larger purpose of this data drives all four of them. As the team builds the scientific foundation for hornbill conservation, they also learn what hornbills need to survive. This is critical considering that six of the eight species of hornbill found in Kinabatangan are considered vulnerable to extinction.

When they are not making short-term trips to Borneo, Ravin and Sanjit work from Kuala Lumpur, the capital city. They are ingenious fundraisers and take advantage of any opportunity, no matter the size. They’ve developed a local bar drink for which a percentage of sales goes to their research and conservation efforts. It seems, no matter the situation, the team’s approach is “Sure, just try.”

When Ravin learned I would be visiting their field site, she immediately asked Helson, who lives in the area, to meet me and my colleagues. The team was eager to share their work on the construction and installation of artificial nest boxes for hornbills. 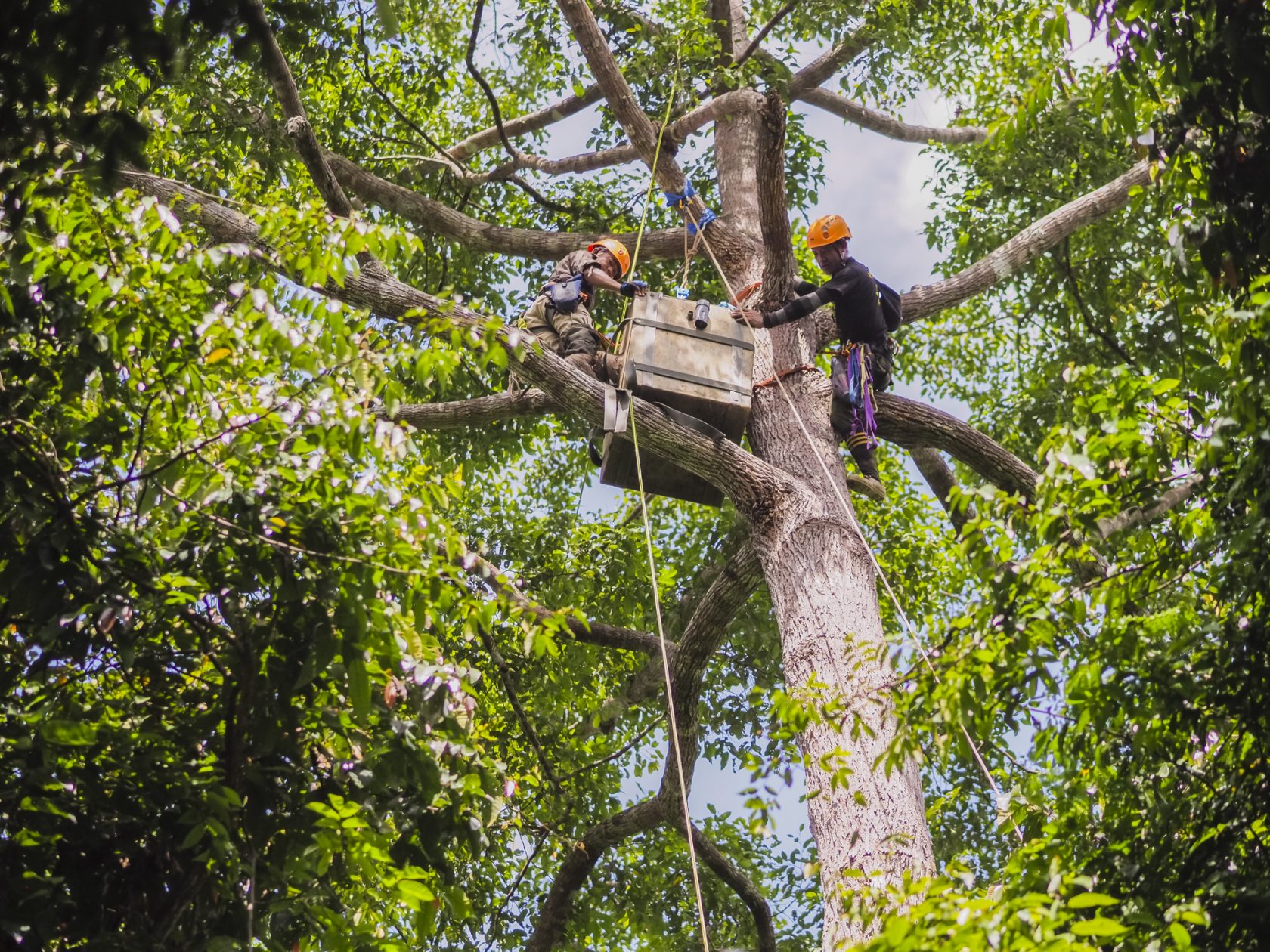 Eddie Ahmad and Sudirman from HUTAN/KOCP placing a nest box in the tree. Photo by Sanjitpaal Singh/jitspics.com.

Building a safe home for hornbills

With the 2017 CLP funding, the team were able to design nest boxes that would attract diverse nesting pairs faster. The trick is to mimic the temperature and humidity conditions of a real tree cavity. Lacking formal training, Helson drew inspiration for the box design from his father, a fisherman whom he had helped build boats. In the end, the team’s box weighed 180 pounds (about 82 kilograms). It was lifted 20 meters (about 66 feet) and secured to a tree.

I am pleased to report that five of these boxes were installed and are being visited by four hornbill species! Hornbills aren’t the only ones to visit the boxes — three of them were taken over by other species, including the red giant gliding squirrel, civet, and stingless bees. 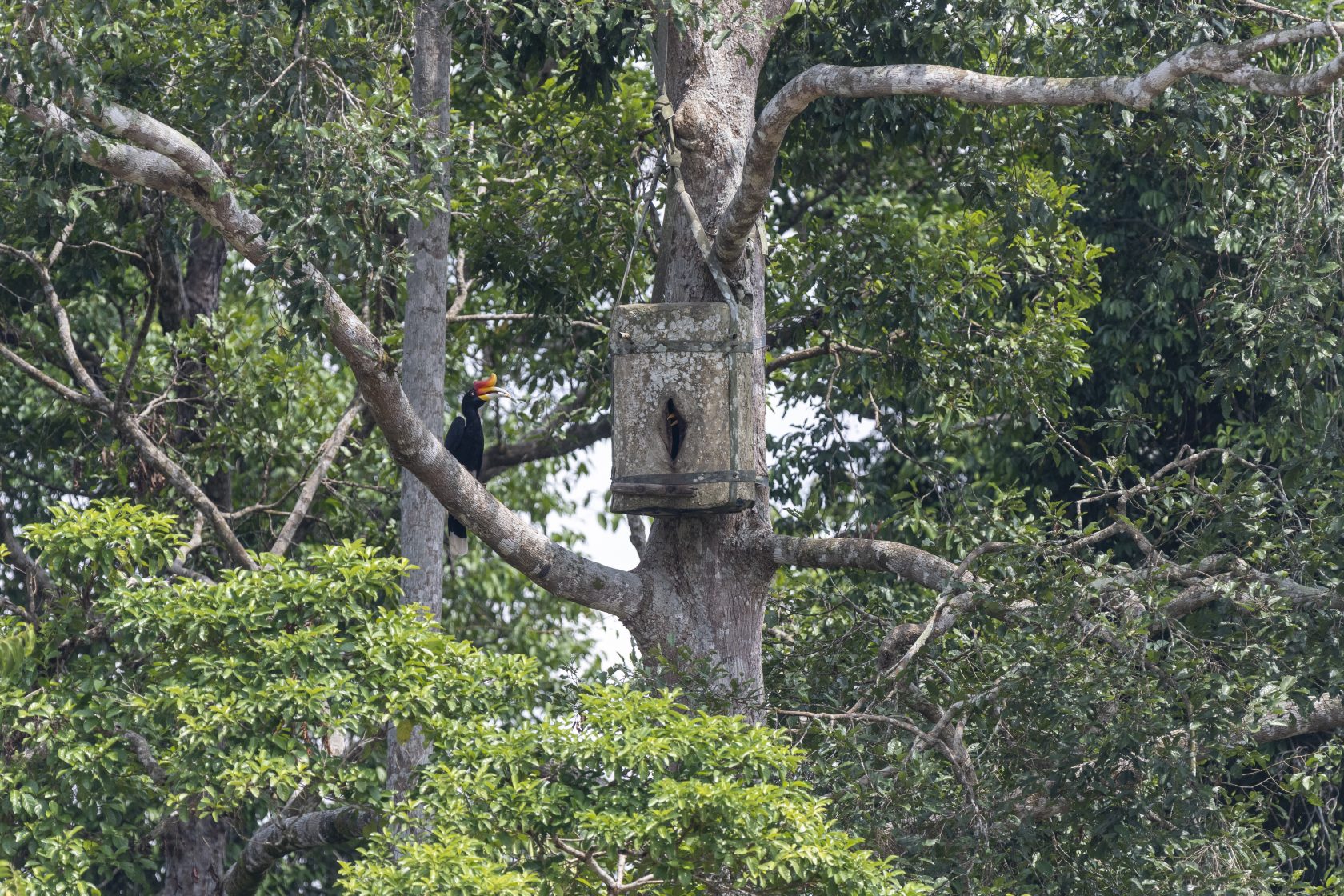 Looking to the future, the team intends to re-wild forest fragments. Helson showed us the modest nursery the team set up in his backyard, where they are growing trees that hornbills favor. While this team recognizes the challenge, their ‘just-try’ attitude prevails. Since my visit this summer, the team has grown 270 seedlings that have already been transferred to the forest through HUTAN’s reforestation team. These trees will eventually provide important food for hornbills.

A new five-year commitment to the Conservation Leadership Programme from Arcadia — a charitable fund of Lisbet Rausing and Peter Baldwin — will help hundreds more conservationists across the globe work to conserve the natural world. The work of Ravin, Sanjit, Helson, Amidi, and the rest of their team demonstrates powerfully what this initiative can accomplish and the obstacles it has inspired young leaders to overcome.

Christina is a Program Manager based at the Wildlife Conservation Society (WCS) in New York. She joined the CLP team in April 2011 and is committed to developing connections between people and the environment. She has a Master’s in Environmental Studies and a BA in Biology.