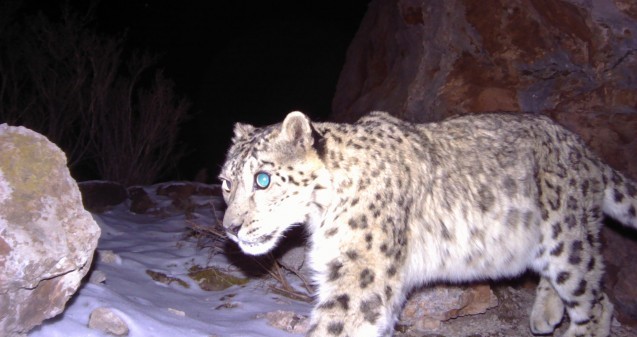 ‘All three of us were exhausted. Wenzha, our Tibetan driver, stared at a flower in front of his feet. Edward, our young Chinese-American volunteer, sat with his head down. Surrounded by vertical cliffs we knew the only way to the next valley was to climb the 40° slope to the hilltop. Around halfway up I looked back to check on my partners. To my surprise I saw Edward start to walk back down, ‘What is he thinking?’ I thought. As I watched, he jumped back from the cliff, with an astonished look on his face, waving at me frantically. I hoped he hadn’t seen a bear. I began to walk as fast as possible towards him. As I drew closer, I read his lips:

These are the words of Lingyun Xiao, Researcher at Peking University, who, together with her team, received CLP funding in 2013 for their project researching the availability of snow leopard prey in China’s Sanjiangyuan Nature Reserve. The team recently submitted a preliminary report which contains exciting insights into what it is like to work in some of the most remote and rugged sites on earth. Their project started when they embarked on a trip with other collaborators to monitor blue sheep on the Tibetan Plateau. Blue sheep, which weigh up to 75kg and have massive horns – prized by game hunters – are a main prey species for snow leopards.

The team surveyed blue sheep and livestock in seven sites each year in different seasons in order to help develop a conservation strategy. Besides doing their own survey, the team worked alongside local community members. They helped the locals to start three of their own wildlife monitoring teams: one focusing on blue sheep and the other two on snow leopards.

‘Working with communities to conserve wildlife is as impactful as it is rewarding. Gaining people’s trust is no easy task though and what might seem standard to conservationists can be quite baffling to the locals! The most important lesson we have learnt so far is to always be prepared to plan according to the real situation. It is very important to listen to the local herders’ voice before trying to involve them in conservation.’

Sanjiangyuan, located in Qinghai, on the edge of the Tibetan Plateau in China, is one of the most important areas for snow leopard conservation. Although the Sanjiangyuan National Nature Reserve covers a large portion of the area, local herders still live inside the reserve. Based on previous successes in Yunta village, Lingyun Xiao tried to involve the local community in her camera-trap research.

‘It was a decision made partly out of frustration. Last December we set out camera traps at eight sites. However, in the first village I found several of them had been taken by the villagers. Even when we’d asked them not to! Camera traps are quite mysterious for the local people and it’s understandable that they don’t want strange things showing up on their land. Involving them in field work can make a real difference.’

The team taught the community how a camera trap works and asked for their help to take care of the cameras, helping to build trust with people there. Apart from protecting their camera equipment, the team have found that a good relationship with local herders is important to ensure accurate data from their surveys.

‘To investigate the relationship between livestock and wildlife, livestock numbers are crucial data; however, it’s always a sensitive topic to discuss here. By chatting and interviewing we gained valuable information about the herders’ livelihood. By understanding each of the stories we heard, our research can give an answer a little closer to reality.’

Ideal conditions for the mountain ghost

In April 2014 the team were lucky enough to spot a whole family of snow leopards, after braving the terrible winter weather in Soujia on the Tibetan Plateau.

‘This kind of weather is hard for us, but it’s ideal for snow leopards that are looking to hunt. All day we kept our eyes busy, hoping to witness a snow leopard hunting for wild prey. We had almost given up hope when we caught a glimpse of two figures sneaking along a cliff. The big tails could undoubtedly only belong to one animal: the mountain ghost.’

At the head of the Mekong River, Zaduo County, Qinghai, is located within the largest continuous snow leopard habitat in China. An established team of 20 local herders deployed 40 research cameras in the area as part of a four-day trap camera training course in May 2014, to monitor snow leopards in the area. The study was supported by Shanshui Conservation Center, Peking University and the local township government in the county.

‘The village where the cameras were placed is also home to a sacred mountain named Namanula. To show their respect, the local people never dig medicinal herbs or caterpillar fungus around the mountain, even though the fungus is a major source of income for the community. In the local religious context, snow leopards are considered to belong to the mountain god, which is helpful in garnering even more support in the conservation of this iconic flagship species.’

Snow leopards as a flagship for landscape level conservation

While discussing external threats such as poaching and mining, the members of the village agreed that snow leopards could be used as a tool to protect the village. One herder concluded,

“We all see news about snow leopards frequently, on TV, newspaper and internet. Of course all of us want to protect our homeland, but before we didn’t know how. Now through the camera trap pictures we can tell outsiders what an important place we are protecting. Snow leopards could be one powerful tool.”

‘During a meeting, staff showed a map of snow leopard distribution in the world, and the local herders were fascinated by how important their homeland, the Tibetan Plateau, is for snow leopard conservation. Using his fist to demonstrate the Earth, one herder exclaimed, “Before we always thought snow leopards were everywhere in the world, but actually they only occupy a tiny, tiny piece of the earth’s surface.”’

For the final stage of this CLP-funded project, the team will continue their field work, collecting camera trap data in early 2015 and analysing the impact of livestock on the populations of blue sheep. In the future Lingyun Xiao and her team plan to carry out more analysis across several seasons and the team hope to be able to establish the density of snow leopards across the region.

‘We plan to continue our community-based monitoring even after the project. The surrounding villages show lots of interest on monitoring their own wildlife. They want to know their wildlife better and to use the baseline information about their wildlife to fight against external threats. We will try our best to support them.’

And if you are not part of the Alumni network what are you suppose to do?