This blog was originally published on the PBS Nature website here. Even before the COVID-19 pandemic, pangolins have been making headlines. These shy, quirky but cute mammals are one of the most heavily trafficked yet least understood animals in the world.

The sad plight that pangolins are facing and the love I’ve had for them since childhood are the main reasons I decided to study them for my PhD. During my first field trip (before the pandemic started), I was lucky enough to see my first live pangolin after almost two decades of dreaming of that moment!

With my fieldwork suspended for now, I’ve been reflecting on how this crisis could impact the future conservation of pangolins and other threatened wildlife.

I haven’t always studied pangolins. In my early conservation days, I was granted an internship by the Conservation Leadership Programme (CLP) to work with the Wildlife Conservation Society (WCS) in Nigeria on a project focused on saving the Critically Endangered Cross River gorilla.

This subspecies is so rare that in two years of fieldwork, I never saw a single gorilla – although I found a lot of nests and dung. Although my research has recently shifted from gorillas to pangolins, this hasn’t stopped me from keeping a close eye on how COVID-19 is affecting vulnerable African great apes.

When I found out about my CLP internship, I felt overjoyed. Since then, one of the few experiences equalling that feeling of excitement was seeing my first live pangolin. He was an extremely shy white-bellied pangolin (Phataginus tricuspis – EN) that I named Abacus.

As part of my PhD project, we have fitted Abacus and three other pangolins with VHF (Very High Frequency) transmitters so we can monitor them closely and gather data on their home range size and occupancy in Nigeria’s Cross River National Park. Just as we begin this vital fact-finding mission, we couldn’t have been happier to hear that CLP has granted us a $15,000 Team Award to help us implement the project! 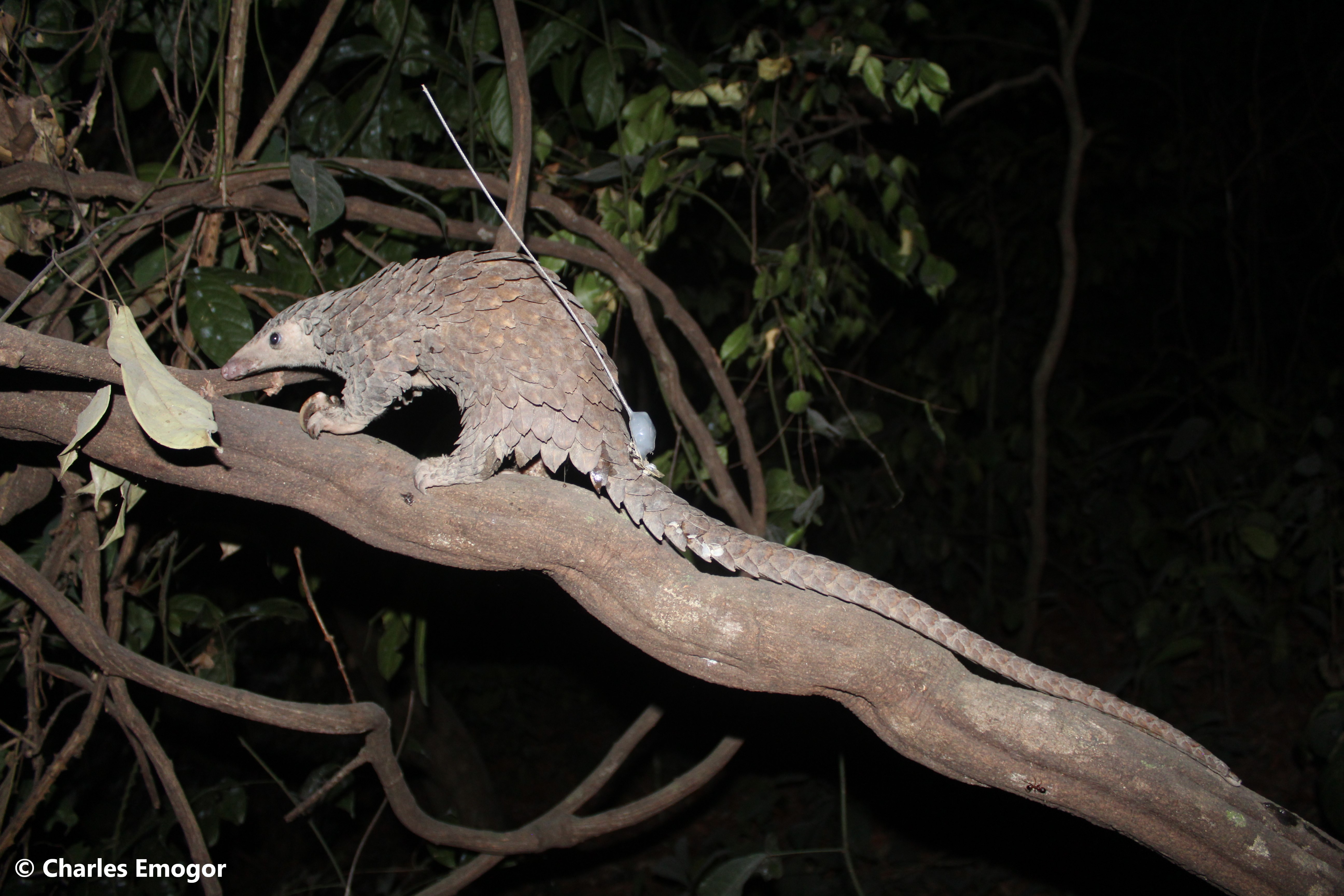 When I first heard the news that pangolins could be linked to the coronavirus outbreak, I initially panicked and felt overwhelmed. I thought about the fate of Abacus and the other tagged pangolins—would they be killed in retaliation by hostile humans or those people with a misplaced urge to curb the spread of the disease?

Then I started to notice a paucity of evidence indicating that pangolins are responsible for the outbreak. Nonetheless, there is evidence suggesting that they are natural carriers of coronaviruses, which are similar to SARS-CoV-2 (the coronavirus causing COVID-19, first identified in a so-called ‘wet’ market in Wuhan, China).

Research also suggests that pangolins might have acted as an intermediary in the spread of the virus. Unfortunately, we might never get a clearer picture of the situation as the markets at the epicentre of the outbreak were shut down by the Chinese government for health reasons.

Whether or not scientists manage to identify the origin and dynamics of COVID-19, we can build on the abundance of available evidence showing that wildlife markets are continually posing danger to human health and well-being. This alone should be a compelling enough reason for us to act now to prevent future outbreaks.

Indeed, many conservationists and organisations have already started calling for a ban on the trade of wildlife for consumption. Although banning the commercial wildlife trade might prove critical in curbing future zoonotic pandemics, it is essential that any ban consider cultural and socioeconomic implications related to the traditions and food security needs of local people.

With projected challenges in enforcing ban regulations, the consumption and trade of wildlife is a globally widespread and complex issue, which almost certainly requires a careful response at the national level at a minimum and more complex global policy protocols to the extent possible. A meeting with a group of local hunters in one of the communities surrounding the Cross River National Park in Nigeria. Photo credit: Charles Emogor.

Lately, I have become more optimistic that the crisis might be beneficial to pangolin conservation. I’m hoping that more funding will become available for pangolin conservation and research, which will throw more light on the dynamics of their illegal trade and ultimately curb the decline of pangolins.

Furthermore, there is the possibility that the demand for pangolin meat will decrease – as already observed in Gabon – and lead to less killing by local hunters. Nevertheless, we should continue to push for a complete ban on the hunting and trade of pangolins and the active enforcement of bans already in place in numerous countries, including Nigeria.

In the meantime, there have been encouraging examples of authorities taking action against pangolin trafficking. The Chinese government, for example, has recently removed pangolin scales from the list of approved ingredients for traditional medicines, after the protected status of pangolins was raised to the highest level in China.

From wanton trafficking to being the suspected cause of thousands of deaths worldwide, pangolins have always found themselves in situations they did not bargain for. But while we watch the current plot twist play out, we can take solace in knowing that this crisis has resulted in increased awareness about the conservation status of pangolins and has already started prompting actions at national levels.

I am indeed privileged to be contributing towards saving these vulnerable animals from extinction. As I count my blessings from my internship days, I am grateful to those individuals and institutions that have played critical roles along my journey up to this point.