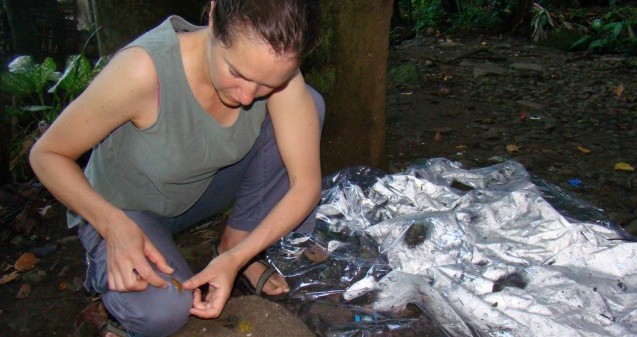 Our team has recently discovered a new technique for learning about flying fox populations, and it is all about poop!

Genetic tools are the obvious answer to metapopulation questions, but genetic samples often come from tissue, making this type of research invasive and often detrimental to sensitive species. Determined to find a way around this problem, our team has spent two years developing a method for getting flying fox genetic material without disturbing the bats: from their droppings.

Although genetics research labs have been using fecal samples to extract DNA for scores of species, many were skeptical whether the process would work for flying foxes. They noted that food passes quickly through the guts of these bats and the amount of any one feces is small, so the chance of finding sufficient intestinal cells seemed unlikely.

Our team decided that it was well worth a try. The team collected flying fox droppings under roost trees and sent them to our teammates at the University of Montana, where we have spent the past year tweaking fecal DNA-extraction kits to obtain and analyze flying fox DNA from the tiny splats. The result is a new protocol for collecting and extracting genetic material from flying fox feces.

The use of fruit bat feces as a source of genetic information is a big break through for our team and for international flying fox conservation. By getting DNA from bat droppings, researchers can study flying foxes and support conservation management without having to capture, handle or harm flying foxes. In addition to being completely non-invasive, fruit bat droppings are abundant, simple and inexpensive to collect, and much easier to get permits for than tissue. Our team is excited about how this new technique is going to open up the powerful toolbox of conservation genetics for the protective management of sensitive flying fox taxa throughout the Old World!