Spending time in the Himalaya gives Kulbhushansingh Suryawanshi tremendous joy. Read about his career to date and the ways he is working to protect his snow leopard companions and the livelihoods of communities that share this stunning landscape. 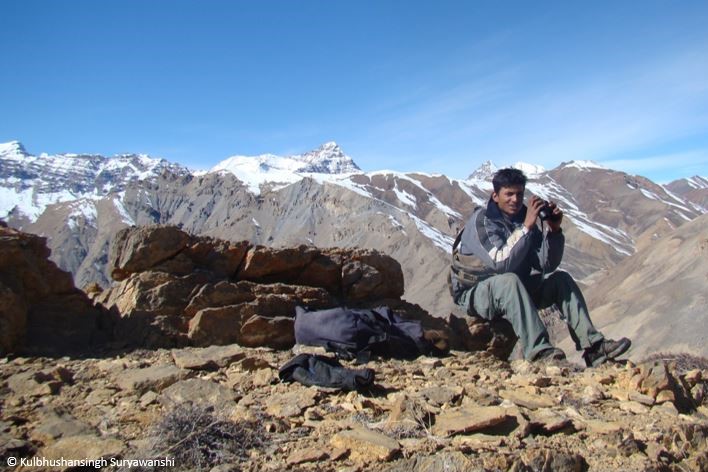 Why did you choose a career in conservation?

There is no single answer to this question. Growing up, I wanted to do something that would allow me to work outdoors, since everything I did back then had to do with nature. Being in India I would frequently go on hiking and climbing trips to the Himalaya and the Western Ghats. This love for the outdoors led me to feel concerned about its conservation. I chose to study wildlife science and conservation for my masters, which brought me face to face with the conservation challenges faced by the wildlife in the Himalaya. Since then I have never looked back. Before I knew it, I had gone on to make conservation my career.

Describe your current work and the primary conservation threats it addresses.

I am the Director of the High Altitudes programme of the Nature Conservation Foundation and the India programme of the Snow Leopard Trust. My role is to lead a team of extremely motivated young researchers and conservationists who are conserving wildlife in the Indian Himalaya. We are a mix of researchers and practitioners who complement each other. We have been working to address threats like retaliatory killing of wild carnivores by herders whose livestock is preyed upon. We work with the herders to mitigate the impacts of the predators on their livelihood and help them live with wild carnivores without persecuting them.

We have a project to create opportunities for the local women to engage with conservation. We are also working to reduce the impact of cashmere-producing livestock husbandry on the local wildlife in the Trans-Himalaya. The growing demand for cashmere in the West has led to a steep rise in the livestock population across the high elevation areas of the Himalaya, Tibetan plateau and Altai mountains. Wild herbivore biomass comprises less than 5% of the total ungulate biomass in the region. We hope to limit livestock numbers by creating incentives to produce cashmere that is high quality and wildlife-friendly.

Our larger philosophy is to do socially responsible conservation, which means we spend a lot of time working with local stakeholders. My work gives me the opportunity to spend a small part of my life in the gorgeously beautiful Himalaya and other mountain ranges of the world. These mountains instill a sense of awe in me that I don’t experience anywhere else. 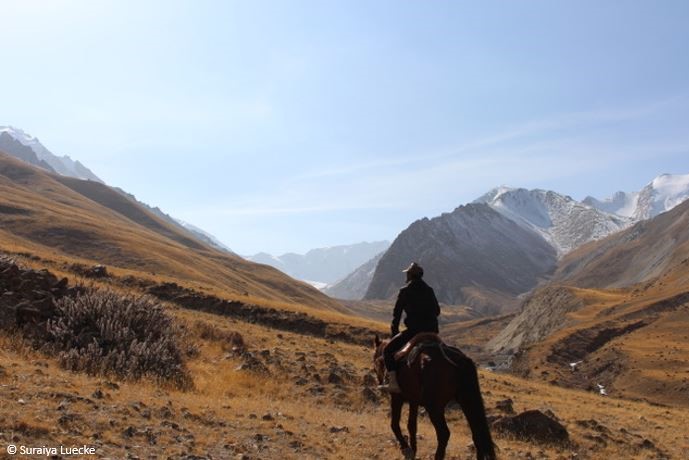 You've done some very interesting work in some really remote spots...what's your most exciting wildlife encounter?

We work for snow leopard conservation and undoubtedly one of my favourite wildlife encounters has been with a snow leopard. When I was a masters student I had a field camp deep in the Himalaya. My camp was in a small hamlet of 15-20 people and we were cut off for the entire winter due to heavy snow. Over three feet of snow covered the mountains surrounding our little hamlet. There were some camera traps around the camp and we had seen a female snow leopard with a cub in the pictures on these camera traps. The mother had been named ‘Sunshine’ because of her bold appearances during daylight. While out doing fieldwork we saw her cub for the first time. The cub was very shy, which led us to name it ‘Shadow’. I have seen Shadow a few times during my work and these encounters are still the most exciting of my career.  The remoteness of my camp and isolation from other people created this sense of intimacy with Shadow that is unique to such exceptional circumstances.

Briefly describe the objectives of your CLP projects and the most significant outcomes to date.

We have had two CLP project (2011 and 2015). The first project was more research oriented; we wanted to understand what factors led snow leopards to kill livestock. We found that livestock numbers in snow leopard habitat was a key determinant and we identified nine villages that were more vulnerable to snow leopard predation on livestock. In our second project we aimed to start at least two conservation interventions in each of these nine villages.

One of these interventions is the SHEN project, which continues to run well. Through this initiative, we have trained 90 local women across six villages to produce and sell handicrafts. Total sales in 2018 were over US$4,000. Another intervention was the community-led livestock insurance programme. In one year alone, it compensated herders for over 50 cases of livestock predation by carnivores.  Nearly 200 herders contributed US$3,000 as premiums for the insurance and a similar amount was distributed in compensations. Crop guarding was instituted in six villages to protect the precious pea crop from wild herbivores. 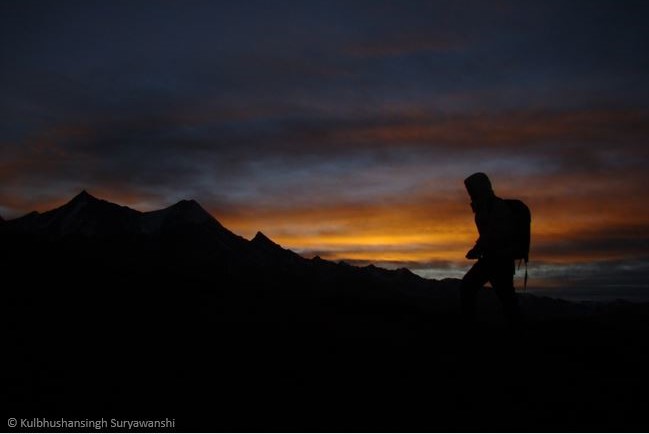 Can you share a memorable highlight from your CLP projects?

Measuring the impact of a conservation intervention is always very difficult. But there are moments that convince you that your effort has been worth it. Such a moment for me was last winter when our field team informed us that a snow leopard had entered a poorly constructed livestock corral in one of our partner villages. I held my breath because, in the past, such an incident would lead to the animal being killed. What I heard next made me jump with joy. The villagers captured the snow leopard in a makeshift cage and they immediately released it unharmed outside the village. There was no external pressure on the village to do this act of kindness. This, to me, suggests that a true behaviour change was achieved.

How did CLP support make a difference to you, professionally and personally?

Unlike many other grant agencies, CLP invested in me as a conservation leader. My interactions with the CLP team during the couple of training modules that I attended helped me grow in confidence as a conservationist. Further, the leadership training provided by CLP helped me grow as a leader. I learned to resolve conflicts within teams. I also learned to balance personal ambition and growth of individuals within a team with the larger goal of the team or the group. Today I work with a large team of researchers and practitioners. I believe that many of the lessons learned during CLP leadership training have helped me become a more effective team member and leader.

What or who inspires you to keep working in conservation?

I have had the good fortune to work with some very motivating and inspirational individuals. There are too many to name but they range from my mentors, my colleagues, community partners and conservation champions in the field. All these people inspire me. The dedication of my mentors and colleagues to the cause of conservation is very motivating. I am always amazed by the selflessness of our community partners when implementing programmes for the benefit of the local community and conservation. Finally, it is always inspiring to hear stories from my father of wild animals that frequent his farm. His love for nature, despite the damage that wildlife causes to his farm, is infectious. 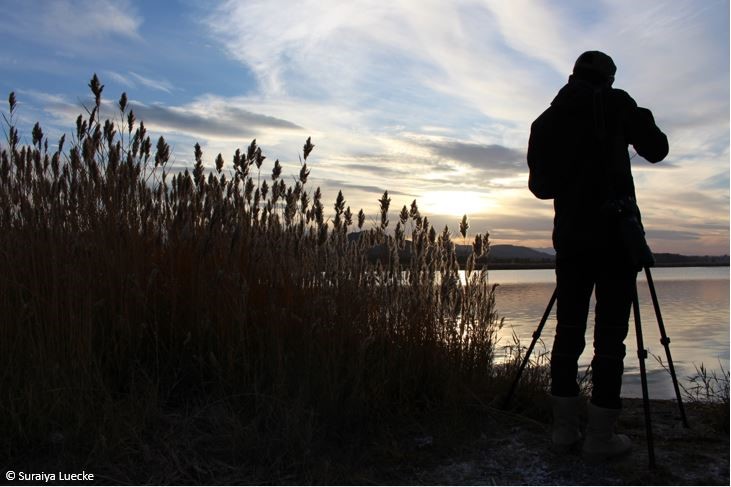 I believe conservation is about people. Many of us are motivated by the wild landscapes and the amazing species that live there. But as a conservationist, we will have to spend a lot of time and energy with the people who share these areas with wildlife. These people alone can ensure the future of these places and species.

What did you learn about yourself as a result of completing your CLP projects?

Through the two projects I have had a relatively long journey with CLP. The CLP network has been a community of like-minded and motivated people who are my friends, peers and colleagues. Conservation can sometimes make you face a series of disappointments. However, CLP projects have taught me to see that ray of hope in every disappointment and work with that hope. By working on these projects, I discovered a resilience inside me to continue inching forward and prioritise long-term marginal gains over short-term bursts of success.

"By working on these [CLP] projects, I discovered a resilience inside me to continue inching forward and prioritise long-term marginal gains over short-term bursts of success." 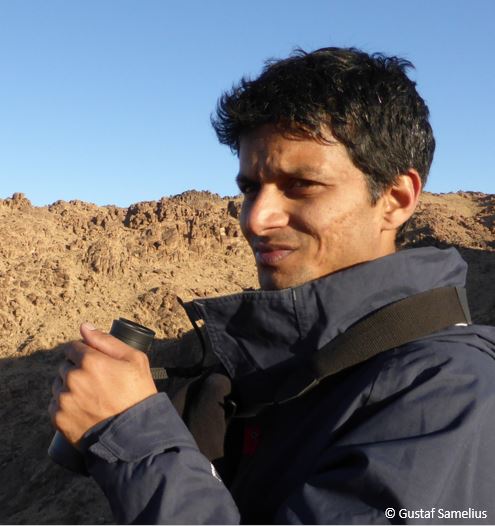