A frog in kingfisher’s clothing 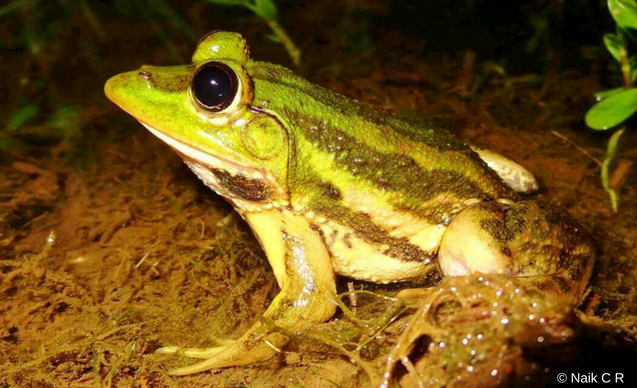 A coastal survey in western India has spawned the discovery of a new species hiding in plain sight.

Tadpoles turning into frogs are nothing new, but when a bird is miraculously transformed into an amphibian – and a previously unknown one at that – it’s time to sit up and take notice.

In a bizarre turn of events that gives a whole new meaning to the term ‘metamorphosis’, a frog whose call was initially mistaken for the more familiar sound made by a white-throated kingfisher has just been confirmed as a new species.

It was citizen science that first shed light on the true identity of the Karaavali skittering frog, named after the region where it was first recorded. In the local Kannada language widely spoken in the state of Karnataka, Karaavali is the name for India’s west coast. 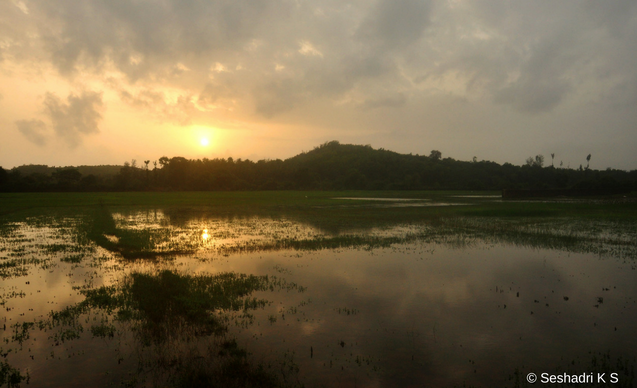 A local forester, C R Naik, was monitoring the biodiversity around his coastal village in order to document the bird, snake and frog species in the vicinity. Having realised that the kingfisher-like call was actually being emitted by a frog, he had the presence of mind to record it on his mobile phone. During subsequent fieldwork in the Western Ghats he played back the recording to a team of scientists, including several herpetologists, who naturally assumed that they were listening to a bird.

Leap of the imagination

Among them was Seshadri K S, winner of a 2010 Conservation Leadership Programme (CLP) award who is currently studying for a PhD at the National University of Singapore. Intrigued by Naik’s claim that the call belonged to a frog and not, in fact, to the commonly heard white-throated kingfisher, Seshadri resolved to visit the coastal site and investigate the mystery for himself. Sure enough, a few hours of nocturnal detective work amid flooded paddy fields in the company of Naik revealed that the forester’s story was not an elaborate hoax. Subsequent analysis of the call helped to confirm that the species was indeed new to science. 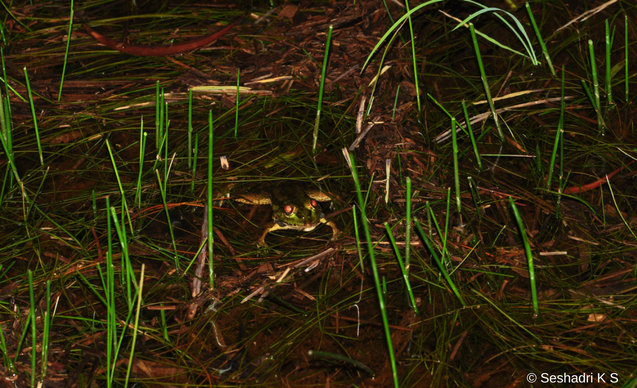 “Often, such scientific discoveries happen because there are foot soldiers like Mr Naik working hard in the field”, Seshadri observed. “Him being a forest official and making observations on nature makes this discovery special. We hope this discovery will inspire the staff of the forest departments and research is encouraged. By joining hands with researchers, Naik has come to the forefront of biodiversity conservation. Such efforts will [help to put] biological research in India on a par with [the rest] of the world.”

In a wonderful example of the results that can be achieved when enthusiastic and knowledgeable citizens join forces with experts, Naik is among the co-authors of a paper recently published in the December 2016 issue of Asian Herpetological Research, which brought the Karaavali skittering frog discovery to the attention of the wider scientific community.

Dr Gururaj K V, a renowned frog researcher and another co-author of the recent paper, who performed the bioacoustics analysis of the call, is a strong advocate of the need to engage the general public in scientific pursuits and was therefore particularly gratified that citizen science had played such a key role in the discovery: “We were certain that the call was of a bird and [that] he was taking us for a ride; however, Mr Naik was adamant. We conceded that the call ought to be explored more and asked Naik to make a video next time he heard it. He immediately got to work and sent us short video clips and said this was a new species of frog.” 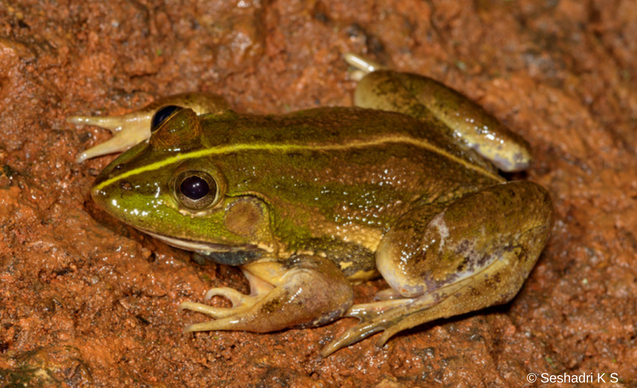 Naik himself was equally elated: “I am so happy that a new frog [has been] discovered from my native place and I am doubly delighted to be part of this discovery. I am thankful for the entire team of scientists who took trusted in me. This discovery has motivated me and I will continue making observations, not only about frogs, but in other [areas of] natural history. Such observations can help in creating awareness among citizens about nature.”

The newly discovered species is already threatened by nearby infrastructure development in the shape of highway construction and conversion of agricultural land. The paper’s authors highlight the fact that the frog appears to be restricted to just three districts in the coastal plains of Karnataka, and recommend that it should be officially classified as Endangered on the IUCN Red List.