Hidden away out of sight, deep reefs persist in tropical and subtropical waters around the world. Little is known or understood about these Mesophotic Coral Ecosystems (MCEs) as it is difficult to reach and study them at depths of 30-150 metres. MCEs, as well as shallow reefs, are light-dependent and are in fact, as CLP alumna Erika Gress describes them, ‘gleaming with colours and life’. 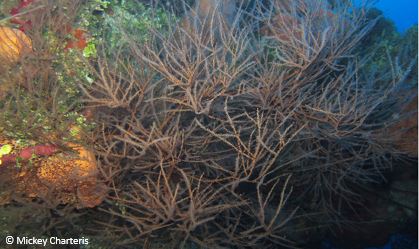 With shallow-water corals in decline from climate change, over-fishing, and habitat degradation, these deeper ecosystems are believed to have the potential to support overall reef resilience. MCEs also hold important and distinct biodiversity and functionality that are still not fully understood. Erika describes what it is like for her to conduct this underwater research: “I feel utterly amazed. It is always exciting. Every dive you notice something different, new organisms. Diving also gives me a peaceful and fullfilling feeling. The minutes down there are simply perfect; you just float and enjoy nature’s best show.” 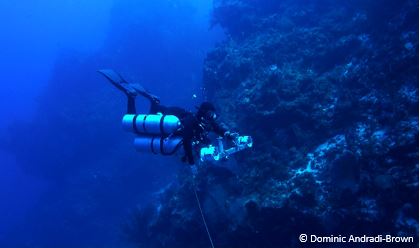 Thanks to the research of a team that the Conservation Leadership Programme (CLP) funded in 2016,  new information is surfacing that will help protect MCEs. With CLP support, the team has been able to explore and offer the first characterisation of MCEs on the west side of Cozumel, Mexico. As described in the team’s recent publication, MCEs are diverse and contain many commercially viable species. That said, potential treats to these reefs, such as over-fishing, were also identified. The team’s recommendations to national park authorities are that MCEs should be included in current reef management plans, and be monitored and protected. CLP project leader Erika Gress has been working with the Cozumel Marine National Park managers to revise the management plan to clearly acknowledge the existence of MCEs within the marine park. From the very first stages of this project, managers have been keen and willing to support research and protection of MCEs. The strong relationship that Erika has developed with these managers will facilitate future conservation efforts.

Another important publication has resulted from this research. Erika and her colleague Dominic Andradi-Brown, a fellow CLP alumnus, conducted a comparative study of black coral densities between 1997 and 2016. Black corals are crucial habitat providers in MCEs, but have been harvested in this area for the jewelry industry since the 1960s. One of the most important findings concerned the continuous decline of black coral density. Harvesting permits have been granted by the government since the 1990s, without there being any knowledge of the conditions of black coral populations, growth rates or reproduction patterns. Erika and Dominic have recommended that harvesting permits be offered based on scientific evidence of sustainability, and that future restrictions on harvesting be imposed in order to prevent total depletion of black corals from this area. 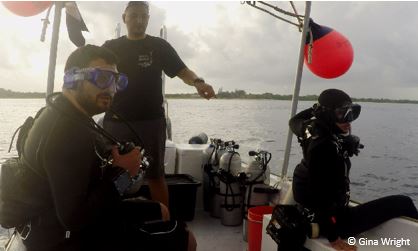 Triggered by the team’s efforts, the Mexican Protected Species List has been recently updated to include the species of black coral targeted for harvesting in Mexico, now categorised as threatened. This is a huge achievement. Since rigorous protocols must be followed when dealing with threatened species, the new categorisation will help to protect black corals throughout Mexico.

This work is far from over. Erika is currently learning from and collaborating with black coral experts around the world. Her research is focused on filling in some of the relevant information gaps on MCEs and black coral biology and ecology. This research is necessary to determine what constitutes sustainable harvesting in Mexico and worldwide.