In Georgia, the Javakheti plateau harbours rich habitats of shallow lakes, swamps and moist meadows, providing a vital refuge for many species of waterfowl including the Vulnerable velvet scoter—a duck long thought to be extinct from its historical range in the Caucasus.

It came as a complete shock when I discovered a small breeding population at Lake Tabatskuri in the Samtskhe-Tabatskuri region, Georgia. Not long after I’d made this breath-taking discovery, I was hit hard by the realization that their survival was in serious jeopardy.

For a long time, very little was known about velvet scoters in Georgia and the wider Caucasus region. At the end of the 20th century, there were about 1,500 velvet scoters recorded across Turkey, Georgia, and Armenia, although their numbers declined rapidly at the beginning of the 21st century. Habitat loss, mainly through global warming and human disturbance, had led to the apparent extinction of the velvet scoter from all three countries.

So when I spotted a few of these ducks, just by chance, at Lake Tabatskuri at the end of August 2014, it was a joy but also a big assault on my emotions. I do not know how long I stood there, absolutely shell-shocked, before a passer-by managed to jolt me back to reality.

Later, in 2015, I found evidence that the scoters were breeding on an island at Lake Tabatskuri. I knew then that it was vital to start protecting what could be the last breeding population of this species in the whole Caucasus. So I started looking for funding to support my research and conservation efforts.

In 2017, my team and I received funding from the Conservation Leadership Programme (CLP), which enabled us to start uncovering key information about the velvet scoter in the Javakheti Plateau to underpin its future conservation.

We conducted the first-ever survey of all seven potential breeding lakes for the species in this region and found that nesting was confined to just one traditionally occupied site, at Lake Tabatskuri, where the breeding population consisted of only 25-35 pairs. We also confirmed that a small island (1 ha) in the northern part of the lake is now the only natural breeding place for velvet scoters in Georgia, as well as in the Caucasus.

Although 25–35 pairs were present at Lake Tabatskuri, we found that far fewer pairs actually nested successfully because local residents were illegally taking the eggs for food. In 2017, only six females were able to hide the nest well enough from people to hatch ducklings successfully.

As part of our CLP project, we circulated information brochures and posters to local communities around Tabatskuri Lake and met with local fishermen. We talked to them about why it was important to stop collecting the eggs and how they could contribute to velvet scoter conservation.

We were well aware of how vital it was to gain the support of the local people. We tried to spend more time with them and help with some agricultural work. We slowly gained their trust. Since then, the impact of humans on the nesting birds has decreased; after 2019, eggs have no longer been collected on the island and an increasing number of females have been able to build nests there (23 females in 2018; 28 in 2019; and 32 in 2020).

This was a great achievement for us and in the first years we thought we would solve the problem very easily and in a short time.

However, the scoters’ breeding success remained low. Only four ducklings fledged in 2018 and five in 2019. Our observations revealed that this was caused by predation on the ducklings by Armenian gulls, which are quite numerous at Lake Tabatskuri. Despite the great attempts of the scoter brood-hens to deter these aggressive predators, very soon after hatching most of the ducklings became victims of Armenian gulls.

We also identified another big problem for the ducklings: disturbance caused by boats on the lake. We found that the death of ducklings in fishing nets and the success of gull attacks was much higher in disturbed rather than in undisturbed situations. Boat disturbance sometimes forced the brood-rearing female to leave the ducklings alone for a short time, giving the Armenian gulls ample time to swoop in and take the ducklings.

In 2020, many Armenian gulls left the lake prematurely in late July because they no longer had chicks to feed, resulting in fewer ducklings being lost to gull attacks than in previous years. We also recruited and employed three local fishermen in the project and, with their help, we were able to establish a “no fishing zone” in the scoters’ feeding areas. We were delighted that 39 scoter ducklings fledged and departed to wintering grounds in 2020 – almost eight times as many as in the previous year!

Overall, our CLP project uncovered new information about the key threats impacting the future survival of the last breeding population of velvet scoters in the Caucasus. Our initial results indicate that reducing human disturbance, and controlled culling of the rapidly growing gull population, could have a positive effect on the scoters’ breeding success here. More work is needed to confirm the effectiveness of these approaches.

Having secured more CLP funding for our project, we are focusing on gathering more information on the direct causes underlying the velvet scoters’ poor breeding success. This year, we captured eight breeding scoters at Lake Tabatskuri and fitted them with light-level geolocators to uncover their important staging and wintering areas. We also have other plans underway to assess genetic isolation levels between Caucasian and north European populations of scoters.

The studies we have undertaken so far will allow us to develop a long-term action plan to safeguard future generations of this tiny remnant population at its last location in Georgia, and potentially in the entire Caucasus region.

We will never give up and hope that the scoter may one day be widespread across the Javakheti and Anatolian plateau in the Caucasus.

These works would not have been possible without support from the Conservation Leadership Programme, The Rufford Foundation and the Institute of Ecology, Ilia State University and NGO “GARIELI” (NGO “GARIELI” was founded by our team. The name of the organisation is the Georgian name for the velvet scoter. The organisation aims to research and conserve waterfowl in Georgia). Thanks also go to all the people who were involved in the implementation of the project and contributed to these works. 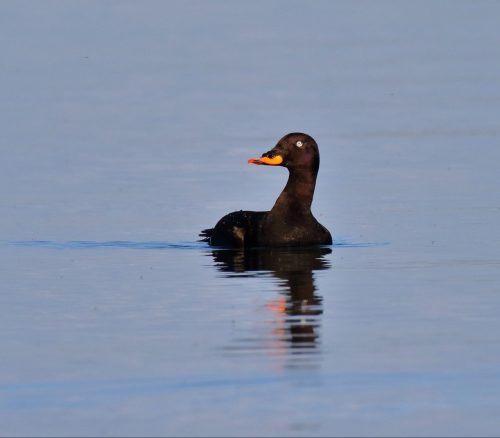