A decade after receiving CLP’s Future Conservationist Award, a team of researchers working in one of the most hostile field sites in Colombia has recently reported the discovery of two new frog species in Zootaxa. Team leader Aldemar Acevedo shares his insights into these exciting discoveries, why he risks his life for this cause, and what’s next in his plan to conserve amphibians living in vulnerable Colombian ecosystems.

In the humid tropical forests of north eastern Colombia, much of the inhabitant fauna and flora remains something of a mystery. For over five decades, civil unrest and armed conflict in the area have made biodiversity surveys extremely risky. Data collection has also been hindered by the limited resources available for ecological and conservation research.

Yet, fresh hope has emerged for protecting life in this hazardous hotspot. Back in 2010, an intrepid team of researchers led by Aldemar Acevedo received CLP’s Future Conservationist Award (funded via IUCN Save Our Species) to assess the conservation status of amphibians inhabiting these Andean forests. Since gaining this springboard for their critical work, the team has spent the last decade uncovering previously hidden secrets about these amphibians and mitigating threats to their survival.

One of the team’s most recent successes is the discovery of two new endemic species of rain frogs. The newly described species both belong to the genus Pristimantis, a large group of frogs widely distributed throughout Central and South America. Occupying a wide variety of habitats and altitudes, Pristimantis frogs have diversified into approximately 500 species, of which about half are found in Colombia. The team’s recently published findings include molecular analyses and morphological comparisons with the frogs’ close relatives to reveal they are new species, as well as a description of their distribution in the region.

However, according to Aldemar, a PhD student at the Pontificia Universidad Católica de Chile, the team has had to overcome a number of difficulties to obtain these important results.

Discovery in the face of adversity

Aldemar and his team discovered the two new frog species in the lowland forests of Norte de Santander, a remote area in the vicinity of the Tamá National Natural Park. There is an unusually low recorded species richness in this site compared to adjacent areas, probably because the ongoing armed conflict in the region has prevented adequate field surveys in the past.

Indeed, the team has risked their own safety to pursue field work in this region. “Studies on diversity and ecology [in the study area] have become a challenge that often endangers our lives,” explains Aldemar. “On several occasions we have had to quickly leave the area, abandoning valuable equipment and precious field results to protect our lives.”

Due to the risks posed by the armed conflict, the team has not been able to return to some areas in southern Tamá for about 8-10 years. As a result, they are now unaware of the current state of the amphibian populations that inhabit these sites, including the new species of salamanders Bolitoglossa leandrae and B. tamaense that they previously described in 2013.

So, why does Aldemar choose to risk his life for this cause? From a young age, Aldemar became passionate about nature while travelling through different rural areas of Colombia with his grandparents. His mother, who is a biologist, also taught him to respect and love wildlife. “What inspires me to continue working in conservation is seeing the receptivity, amazement, and good disposition of the people who live in the areas where amphibians and other species live,” explains Aldemar. “This helps me to create the appropriate tools and propose viable conservation strategies that integrate diverse human societies and use different perspectives from natural history, ecology and socio-ecology.” 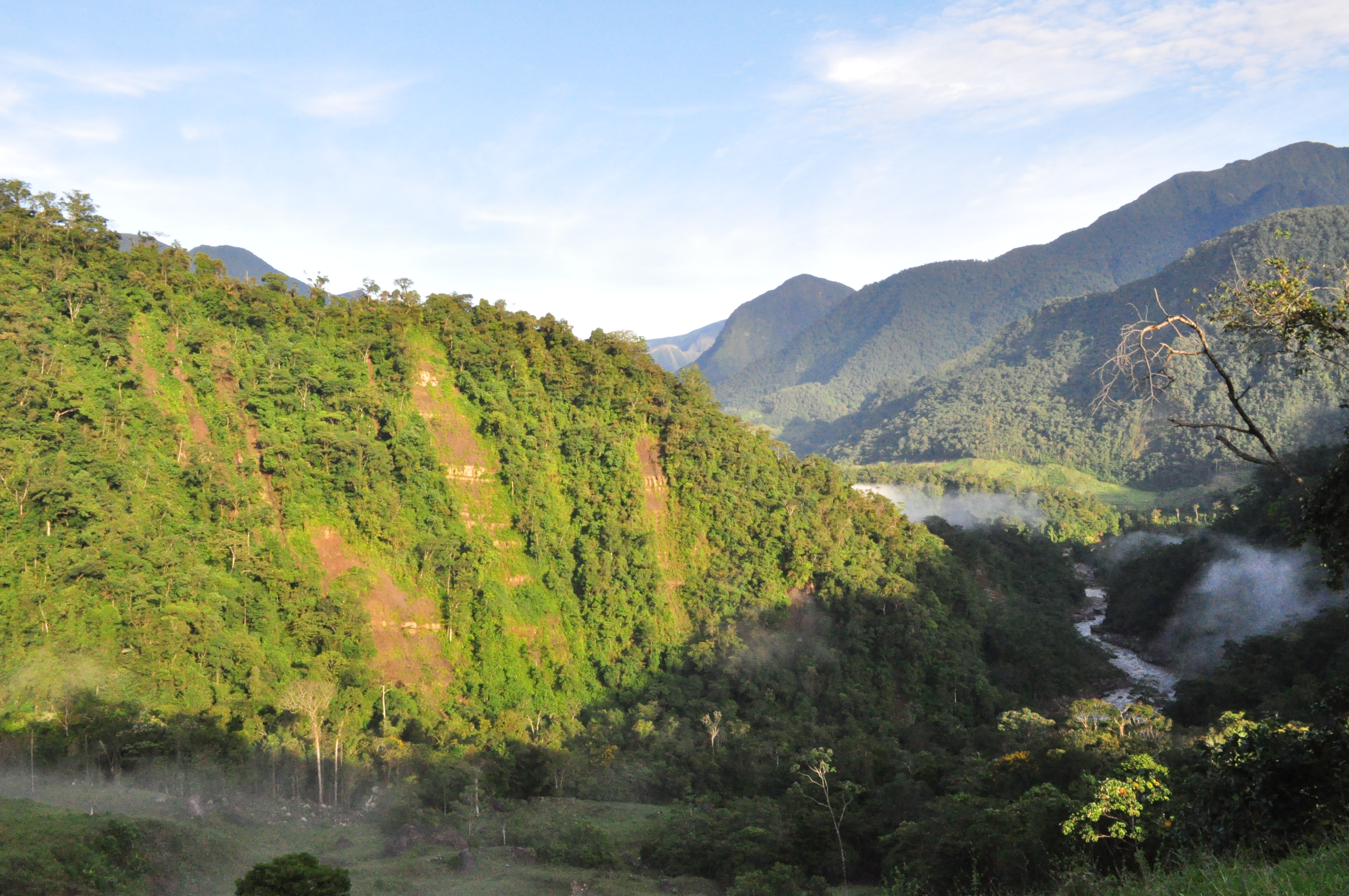 In the Andean forests of north eastern Colombia, biodiversity surveys have been hindered by armed conflict in the region and limited resources for ecological and conservation research. Photo credit: A. Acevedo.

Although the team has only just published their recent discovery, they actually found the new species a decade ago during the initial stages of the 2010 CLP project. Although they suspected the frogs were new species, the researchers didn’t have the resources to obtain the required evidence at the time. Specifically, they needed to perform phylogenetic analyses involving expensive molecular techniques that would show the frogs had genetically diverged from their ancestral relatives into new species.

In the end, the researchers had to wait ten years to be able to use these techniques. “The molecular techniques are now more accessible and affordable, and finally helped us to uncover robust genetic evidence showing that the frogs are new species,” says Aldemar. “Interestingly, during this process, we obtained molecular sequences from geographically related species so we could rule them out, which resulted in the discovery of at least three more new species that we hope will be published soon.” Along with phylogenetic analyses, the team also compared the frogs to specimens of close relatives they found in natural history museums, revealing key differences in their morphology and diagnostic characteristics.

Overall, a decade after receiving their initial CLP award, the team has obtained crucial results about previously hidden species inhabiting this biodiversity hotspot. “We have also constantly evaluated threats to the amphibians in the area, especially in relation to the impact of the pathogenic chytrid fungus Batrachochytrium dendrobatidis (Bd), which is the main cause of the dramatic decline in amphibian numbers worldwide,” adds Aldemar, who last year co-authored a paper in Science evaluating the global impact of Bd.

As well as risking their lives to pursue their crucial work, limited financial support for conservation and a lack of job opportunities have also been considerable barriers to achieving the project’s aims.

Aldemar explains how CLP funding helped overcome these barriers in the initial stages of the project. “CLP was the first donor that allowed us to strengthen our amphibian conservation project,” he recalls. “A decade ago, we didn’t know much about the state of amphibians in this part of Colombia, but thanks to the CLP project, we have significantly expanded knowledge about this group.”

Along with support from the CLP and Save Our Species, Aldemar also credits his team’s accomplishments to the late Colombian herpetologist, Professor María Cristina Ardila-Robayo – so much so, that they named one of the new species, P. ardilae, after her. “Professor Ardila-Robayo contributed significantly to our knowledge about the amphibian fauna of Colombia and she trained a lot of new herpetologists,” he explains.

Interestingly, the name of the other new species, P. bowara, is the team’s tribute to the local U’wa community, as bowara means ‘jungle’ or ‘forest’ in their dialect. “The indigenous people play such an important role in the preservation of natural resources, especially in such remote areas. On some occasions, we have exchanged knowledge with this community and in the future we would like to more actively involve them in conservation programmes,” says Aldemar.

According to Aldemar, threats to amphibians in the Andean zones range from the destruction of habitats to the expansion of the agricultural frontier. Climate change, in particular changes in rainfall or increases in temperature, can harm amphibians and increase the spread of Bd. As such, the team continues to work on diagnosing and evaluating amphibian populations to help assess the global impact of this deadly fungus. They will also use the results from a decade of research to generate a conservation management plan for a group of environmental, educational and political institutions in the region. Aldemar hopes that these institutions will help his team conserve the rich natural treasures here that that they have risked so much to protect. 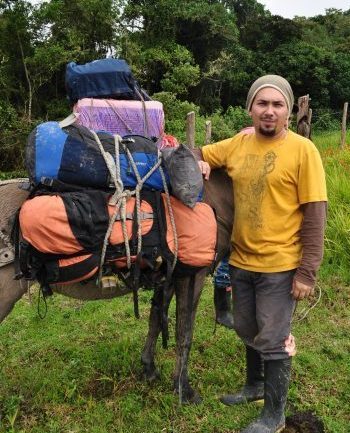