This blog has been adapted and translated from the original version (in Spanish) published here.

The formal name of our CLP project is “Creating the grassroots to conserve the Santa Fe frog in the South American Great Chaco.” But for the non-academic community, we called it the “Kururu Pytã Project.”  Kururu Pytã is the name of our target species – the Santa Fe frog – in Guaraní, a language spoken by the indigenous communities where we work in north-eastern Argentina. We hoped that by using the name Kururu Pytã, the wider public would become engaged in the conservation of this threatened amphibian.

Our project, for which we received a CLP Future Conservationist Award last year, sought to better understand the conservation status of this frog and the threats that affect it through intensive fieldwork in Argentina’s Gran Chaco region. Our ultimate aim was to create a basis for its protection by involving the indigenous and “criollo” communities, researchers, and conservationists through workshops and public participation campaigns. Join us on our project’s last journey! 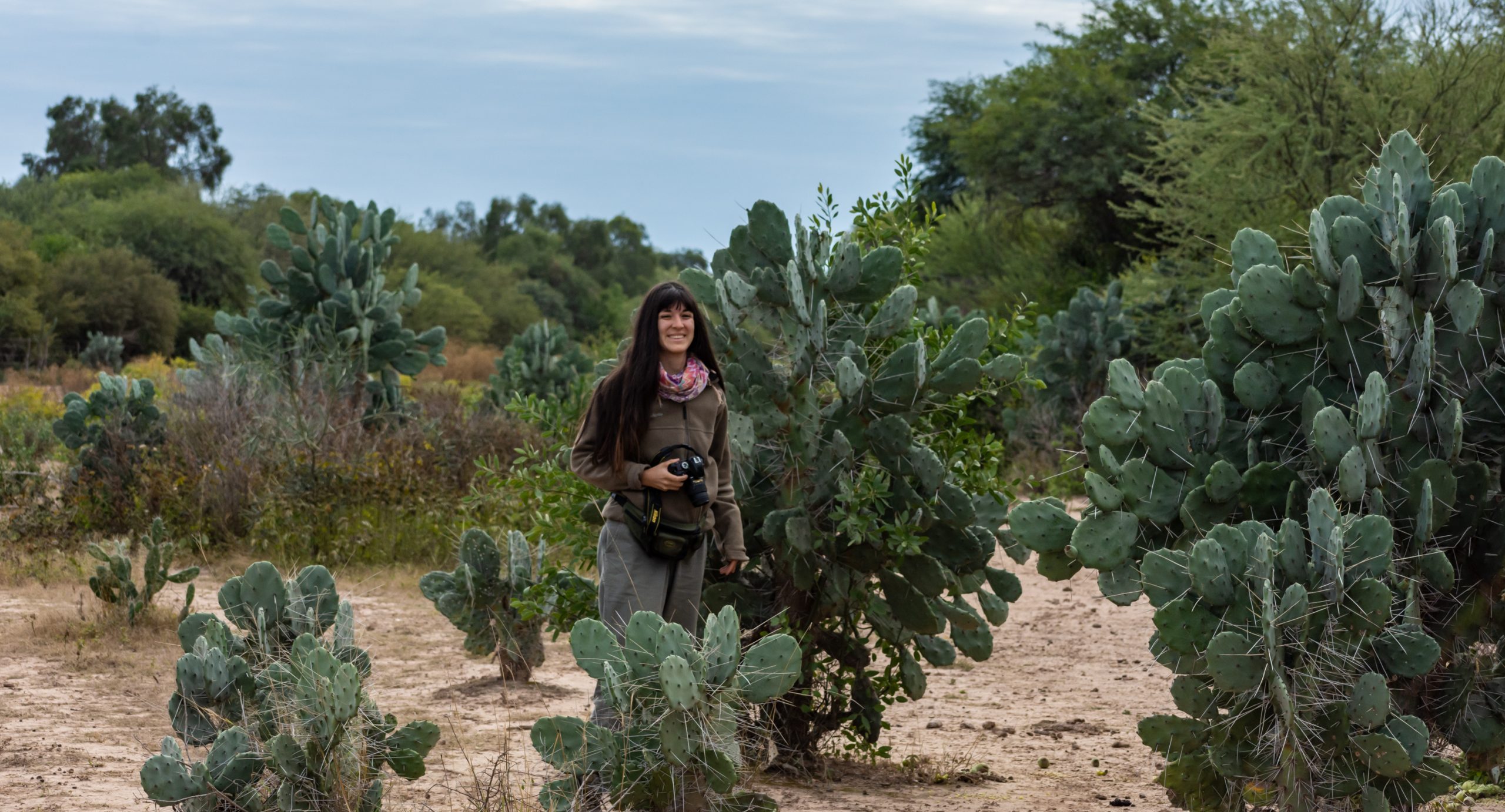 A quest for knowledge

In autumn 2021, we travelled to the province of Chaco, north-eastern Argentina, to continue planning our fieldwork on the mysterious Kururu Pytã. This species is categorized as Near Threatened globally, but the conservation status of its regional population is largely unknown and many aspects of its biology are still an enigma – key issues that need to be addressed if we are to effectively understand and conserve this species.

On our last field trip as part of our CLP project, we wanted to get to know the local community and explore areas to develop future field campaigns. During the trip, we uncovered for the first time the different realities facing the people that live together in the region. This will help guide the extensive work we are planning in the territory, including creating the first networks of collaboration and communication among the locals.

Between landscapes of quebrachales (dry forests mainly consisting of willow-leaf red quebracho trees) and reddish-coloured rivers characteristic of the region, our first stop was our operational base in the town of Nueva Pompeya, located in the El Impenetrable Zone – an area so-called because of its almost impassable environment of dense, thorny vegetation.

From there, we set off to meet our local stakeholders.

Getting to know the local community

Our first visit was to Rosita, a villager whose home adjoins part of the Bermejito River, an area that appears to be a suitable environment for the Kururu Pytã (that is, rain-floodable lowlands).

We also visited Daniel Jaimes and his family, who had already collaborated with other research groups and warmly welcomed us to share their experiences with the Kururu Pytã. We chatted at length about the social and environmental issues facing the region, such as deforestation, indigenous communities’ land loss and social abandonment. We were also delighted to be taught how to identify the Chaco’s native flora and fauna and learn their local names.

Finally, Licindo Tebez received us at his home in El Hacha, where we had the honour of meeting Hugo Correa, Natay Collet, and Genaro Tebez, who, along with Licindo, are part of the Quimilero Project team.

This initiative, coordinated by Dr Micaela Camino, aims to protect a peccary species known as “Quimilero” (Catagonus wagneri) and its native environment, the Dry Chaco. During the time we shared, they told us about the enormous scientific and outreach work they carry out together with local people, from whom we have much to learn.

An outing to the impenetrable

Before leaving for our next destination and, despite it being the season of low amphibian activity, we decided to make a night outing through the woodland to see what we could find… And they did not fail us! We were able to see some species of frog (unfortunately not the Kururu Pytã) and other local fauna including a Cope’s toad, a Chaco owl and a southern three-banded armadillo, taking advantage of the darkness of the new moon that allowed us to contemplate an incredibly starry sky.

Finally, we headed to Paraje La Armonía, to reach our last destination: the great El Impenetrable National Park, one of the most important protected areas in the Argentine Chaco. This national park is the largest in northern Argentina, and aims to preserve a large proportion of the last native forests of the great Chaco in our country, while also harbouring enormous biodiversity.

We met the protected area rangers, introduced ourselves, and talked about the project. After travelling 36 km along the main road, we arrived at the banks of the Bermejo River; the northern limit of the park facing the province of Formosa.

During this tour, we were able to explore the diverse environment of the protected area for the first time and work out if there were favourable habitats for the Kururu Pytã. We spent the night in the campsite in front of the mighty Bermejo River and at sunrise, we woke up to the morning songs of the charatas, characteristic birds of the Chaco Mountains. It was the perfect way to end this second trip in the lands of the Kururu Pytã.

Our last field trip as part of our CLP project also allowed us to exchange information about the Kururu Pytã and inquire about local people’s knowledge and perception about this species in particular, and about amphibians in general. We were also able to talk about the environmental and social problems in the region, such as timber felling, illegal trafficking of flora and fauna, and the encroachment of agriculture on native forests. All of this will be crucial to achieving the objectives of our project.

During these days spent sharing lunches, traditions, knowledge, and mates (a traditional South American tea-like beverage, made using leaves and twigs from the yerba-maté plant) with the local people, we never stopped being surprised by the warmth, hospitality, and positive disposition towards us and our work. We have a long way to go, but we came back full of expectations.

Isis Ibáñez is a CLP alumna and biology student at the University of Buenos Aires in Argentina. She is currently finishing a Bachelor’s degree specializing in Animal Ecology. During her undergraduate years, she volunteered in the Great Chaco in Argentina, a region that attracted her because of its great biodiversity and socio-diversity.  She is the leader of the Kururu Pytã Project, which was funded by CLP in 2021, and she is interested in focusing her work as a biologist on applied research in amphibian conservation, as well as working together with the local communities in this territory.

Are you an emerging conservationist with an exciting project idea like this one? Then why not apply for one of our Team Awards for a chance to gain project funding and access to training, mentoring, networking and other career-boosting opportunities?

The competition for our 2023 Team Awards is now open until 10 October, 2022 – but don’t delay – there’s a lot to do between now and the deadline! For more information, including eligibility criteria and how to apply, visit our Grants pages.

Early-career conservationists - don't get left behind in the journey towards your #conservation goals! You have just under ONE week left to submit your application for a CLP Team Award.

We really don't want you to miss out on all the amazing benefits you can gain from winning one of these awards: $15,000 of project funding, plus extra grants, training, mentoring and networking opportunities as part of the CLP Alumni Network.

All you need to do is finish off your proposal and press SUBMIT on our online application portal by the deadline on 10 October, 2022.

We look forward to reading your proposal. Good luck from all of the CLP Management Team!

On this #WorldHabitatDay, emerging conservationists funded by CLP share how they are protecting some of the most imperilled places on Earth.

In The Revelator’s "Protect This Place" feature series, (launched earlier this year), five CLP alumni call attention to the work they are doing to save areas with rich natural and cultural heritage, and share key lessons we can learn from their fight.

From restoring indigenous forests on Rapa Island, French Polynesia, to developing legislation to protect shorebird stopover sites in China, read how our alumni are fighting to save ecologically important areas across the globe.

LIFE BEYOND AND WITH ALL LIVING ORGANISMS They live and we also live, species of plants and animals, water bodies, soils of the Earth, air and sounds are intricately inherent powers of living beings. It's our primary responsibility to see to their general and specific welfare. You're concerned and I am too.