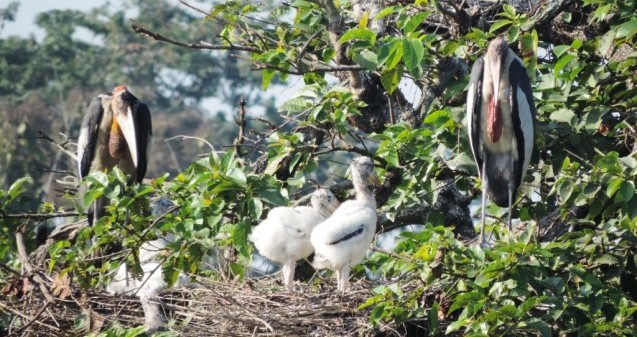 CLP award winners Purnima Devi Barman and her team have been working with the world’s largest breeding colony of greater adjutants (Leptoptilos dubius) a globally Endangered bird with only three key breeding sites remaining, two in India and one in Cambodia.

Greater adjutants are enormous (140-150cm tall) birds with large bills and neck-pouches.  Current estimates of greater adjutant stork numbers suggest that fewer than 1800 birds remain in the wild and their numbers are decreasing. Their main threats are direct exploitation, particularly at nesting colonies, habitat destruction, including some felling of nest-trees, and drainage, conversion, pollution and over-exploitation of wetlands (IUCN/BirdLife 2013). To help tie-together conservation efforts between Cambodia and India, Purnima was supported by CLP in 2012 to visit Wildlife Conservation Society in Cambodia.

“I enjoyed my trip to Cambodia very much. Each day I learned many new things including new ideas for conservation and new methodologies for bird monitoring.”

In Assam, the team have been monitoring nest building behaviour, clutch size, incubation, hatching success, population recruitment, diurnal feeding behaviour and parenting in this breeding colony since 2009. In their most recent survey the team recorded 57 nesting trees and 171 active nests.

Previous studies and observations of the team over the last five years have indicated that the usual clutch size for greater adjutants is one to three chicks; however recently they came across four nests with a clutch of four chicks. Research has suggested this may have been due to an increased availability of fish, but the team’s work to raise awareness about the storks may also have had a part to play. By providing continuous education and motivation to local villages in last five years, they have ensured that not a single nesting tree has been cut down in Dadara-pacaharia-Singimari nesting colony.

“The villagers have now developed an ownership feeling for the bird and have become the protector for this species in this nesting colony.”

Purnima’s first CLP project resulted in much greater awareness of the species, and a concerted local effort to protect their nesting sites. Through a Conservation Follow-Up Award winning project her team has been able to further this work by further involving local people and policy makers. 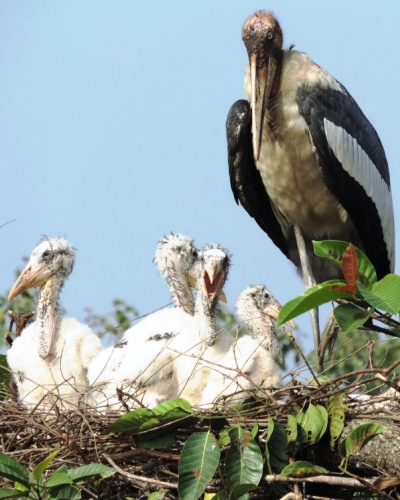