Last month, the International Union for Conservation of Nature (IUCN) hosted its first-ever virtual Global Youth Summit. The Conservation Leadership Programme (CLP) leapt to get involved in the event, which brought over 10,000 young conservationists together from around the world to enhance interdisciplinary learning and drive momentum for change. Find out below what we learned from the summit, including top tips on how young conservationists can advance their careers.

Activities at the IUCN Global Youth Summit (April 5-16, 2021) included youth-led capacity building workshops, networking events, and key contributions to an outcome document that will be delivered to IUCN’s World Conservation Congress in September 2021. Having been committed to supporting early-career conservation leaders for 35 years, CLP was delighted to be able to sponsor the Global Youth Summit and screen a special video during the event’s Film Fest.

CLP also hosted two networking sessions during the summit (one in English and the other in French). One of the key goals for these networking sessions was to provide an opportunity for young conservationists around the world to connect and learn valuable lessons from each other.

During his networking session, Henry Rees (CLP Programme Officer, Fauna & Flora International) posed the question: “What kind of support or opportunities can help advance a young person’s career in conservation?” The audience – which comprised around 60 young conservationists from around the world – were quick to answer with these top tips.

Take volunteering and internship roles, at the right time

One key theme that arose from the audience’s responses was the need to pursue volunteering and internship opportunities. Many participants described these experiences as important not only because they will enhance your CV and set you apart when you start applying for jobs, but also for allowing you to grow your skills and self-confidence.

On top of this, one participant said that by taking as many volunteering opportunities as possible, you can choose exactly what area you want to work in, give yourself options and develop your career path.

However, one audience member from El Salvador pointed out that it is more difficult to get internships in the global south, particularly paid internships. “I recommend anyone in this situation to be proactive, go to their local NGO, and offer your services as a volunteer to build your CV,” she said.

Another key point that came out of the discussion was the timing of the volunteering and internships you pursue, with one participant saying: “There needs to be more opportunities for university-age people looking to make the next big step, before they have graduated – after that point, they will lose out on the student summer opportunities and can no longer get access to many of the internships and volunteering jobs on offer.”

Finding a good mentor was also identified as a career-defining moment by other participants. One member of the audience recommended looking for mentors among the people you work with, such as co-authors, people you speak to at conferences, or mentor/mentee programmes offered through an organisation – and to persevere even if it seems daunting at first.

Another participant – a 15 year old girl from Kenya – gave a rousing speech. “I have many mentors but the most important one is my mother, who walked into a government institution asking for support for our own movement to restore Lake Victoria.” She added that, in developing countries, when you don’t have the support available, people shouldn’t be afraid to ask for help to start their own conservation programme, no matter what your age. “You’ll be surprised by the level of support you’ll get,” she said.

Another participant from Mexico suggested that learning different languages was also key to a successful career in conservation, commenting: “It will open several doors, multiply opportunities for collaborations and networking, and allow you to learn from different cultures. It’s never too late to start!”

A virtual platform to boost inclusivity and diversity

After attending the summit, CLP alum Alfonso told us that such events are critical for conservation and should be preserved and replicated, since “young people tend to be underrepresented in decision-making and have limited opportunities to travel to international meetings.”

Evidently, the virtual format enabled many people from different backgrounds to attend, who otherwise may not have been able to travel to the meeting (even in the absence of the pandemic).

“I think the virtual element of the event really boosted its inclusivity and diversity, and consequently brought fresh eyes and ideas to the table,” said Alfonso, who made several new connections during the event, mainly with other Hispanic people looking for advice on how to foster their careers.

CLP alumna Ravinder also made at least five new connections, noting that the virtual platform gave shy people a chance to speak up. “[The Global Youth Summit] was a good place for young conservationists to seek advice, to take control of whatever they want to speak about that may not be usually discussed at conferences,” she added.

It seems clear that the Global Youth Summit was a resounding success. By providing a vital virtual platform for young voices during a particularly challenging time, the summit has helped these conservation heroes continue to drive the changes we so desperately need to save our planet’s biodiversity and solve the climate crisis. CLP was honoured to be a part of the event and to be able to hear what matters most to the young people we strive to support in their critical conservation actions.

In 2020, CLP reached an important milestone in its 35-year history, having surpassed ten million US dollars in funding donated to support early-career conservationists in their actions to save globally threatened species. This year, we are supporting a further 92 conservationists who are leading 22 vital projects in Africa, Latin America and Asia & the Pacific (through the generous support of Arcadia – a charitable fund of Lisbet Rausing and Peter Baldwin).

To find out about our past projects and the young conservationists we have supported, see our Supported Projects and Interviews for further information. 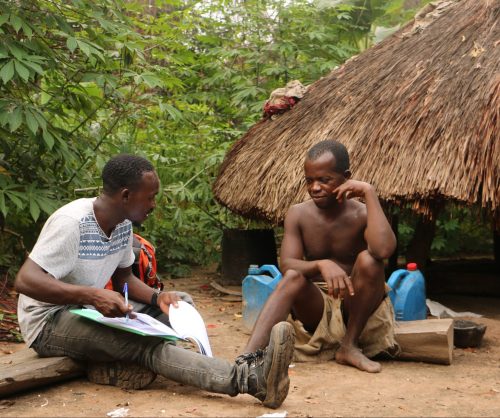