We are delighted to announce the winners of the 2022 Conservation Leadership Programme (CLP) Team Awards! This year, CLP is supporting 23 projects led by early- to mid-career grassroots conservationists who are driving crucial actions to save a range of imperilled species and habitats around the world.

The award-winning projects, worth just under $460,000 in total, include 16 Future Conservationist Awards, five Conservation Follow-Up Awards, and two Conservation Leadership Awards, spread across three regions: nine in Latin America & the Caribbean, seven in Africa, and seven in Asia & the Pacific.

This year’s supported projects will be undertaken in 17 different countries and will focus on conserving a variety of threatened fauna and flora. Below we describe some of this year’s winning projects in more detail, including some of the teams’ reactions to the news of their award.

A team of CLP alumni working at the NGO, South Rupununi Conservation Society (SRCS), has been selected for one of two Conservation Leadership Awards (worth $50,000), which is set to help secure the future of an Endangered bird – the red siskin – in Guyana.

The team’s 2022 Leadership Award will help them build on their previous CLP-funded work to develop a community-based conservation management zone in southern Guyana. Working with six indigenous communities, the team will create boundaries around the management zone, and discourage trapping of red siskins and destruction of their habitat by training local rangers.

Supported by CLP funding first in 2005 and then in 2013, over the last two decades the SRCS has spearheaded a conservation movement to protect Rupununi red siskins and collected a vast amount of data on the species, which played a key role in establishing South Central Rupununi as Guyana’s first Bird and Biodiversity Area in 2020.

The team was delighted to hear the news of their award, with leader Leroy Ignacio commenting: “This award represents the final step of support from CLP that has spanned almost 20 years and has helped SRCS to provide much-needed protection for one of Guyana’s most threatened birds.”

Another of our Continuation Awards has been granted to a team of CLP alumni to help scale up their efforts to save the Critically Endangered giant squeaker frog in Ghana.

The only known site harbouring this imperilled amphibian, the Sui River Forest Reserve (SRFR), is being degraded by extensive logging and illegal farming, along with the spread of an invasive plant that prevents the regeneration of native rainforest trees.

One of our 2022 CLP Follow-Up Awards, worth $25,000, will support a team of conservationists working with the NGO, Save Ghana Frogs, led by its Executive Director, Gilbert Adum. The award will allow the team to undertake vital conservation actions, including establishing SRFR as a Key Biodiversity Area; improving habitat conditions; and leading conservation awareness programmes among local communities.

This project builds on the team’s previous CLP Future Conservationist Award in 2013, which helped elucidate our understanding of the giant squeaker frog, the threats it faces, and how these can be addressed in the local socio-economic and political contexts.

Describing his teams reaction to the news, Gilbert said: “We are so excited to have another opportunity to work with the indefatigable CLP Team so we can improve the chance that the giant squeaker frog will survive for our generation and future generations.”

Sharing the landscape with the iconic Andean condor

This year, one of 16 CLP Future Conservationist Awards, each worth $15,000, has been granted to a team of early-career conservationists in Peru committed to protecting a vulnerable bird intrinsically linked to Andean cultures: the majestic Andean condor.

The award will allow the team to uncover vital information about the threats this vulture faces and strengthen conservation strategies, including engaging with local communities to reduce their persecution of these birds and instead promote peaceful co-existence.

After hearing the news about their award, team leader Sandra Cuadros said: “Our team is more than delighted to be the recipient of this prestigious award…. it is meaningful beyond the prize itself because it will underpin more efforts to conserve this emblematic and vulnerable species.”

A quest to conserve the tri-spine horseshoe crab in Palawan, the Philippines

Another of our 2022 Future Conservationist Awards goes to a team of emerging conservationists dedicated to conserving the Endangered tri-spine horseshoe crab and its habitats in Palawan, the Philippines.

The progressive loss of suitable habitats for this living fossil is a major barrier to its future survival. The team will conduct monthly surveys to gather crucial information about the species, including its spawning behaviours, habitat requirements and nest characteristics. They will also conduct interviews with local fishers to identify the main threats to the species.

The long-term objective is to use the data from the project to convince decision-makers to develop a conservation plan for the tri-spine horseshoe crab in Palawan to try to ensure its continued survival.

Team leader Lea Gajardo told us she was filled with joy when she heard the news: “We [the team] have been waiting for this, so when I broke the news to them, the overall feeling was a mixture of relief (from the wait) and excitement that the realization of the project is close at hand.”

Watch the project video below:

A team of rising conservation leaders in Kenya has been awarded one of our Future Conservation Awards to support their work saving the Endangered Hildegarde’s tomb bat from persecution by local people.

Habitat degradation and the effects of climate change are already wiping out this species from its home rangelands in coastal Kenya. To make matters worse, local people are evicting the bats from their cave habitats, and even killing them, due to the misplaced fear that they spread COVID-19.

This project aims to engage with these communities to raise awareness about the plight this species faces, and increase the number of bats and suitable roosts in the conservation sites.

Commenting on the award, team leader Josephine Ambaisi said: “This is an excellent opportunity to begin a community-based conservation initiative for the Endangered Hildegardes tomb bat. What’s more, it offers a chance for our team members to grow their skills and careers, as well as a platform for mentoring future conservation leaders, which will benefit not only the target species but other threatened species as well.”

Congratulations to all our 2022 award-winners!

As part of their award, all project team members will join our alumni network (now numbering almost 3,000 conservationists worldwide) to access additional funding, training and networking opportunities. Additionally, one team member will be invited to participate in our Conservation Management & Leadership workshop to further build their conservation skills and apply these in their projects, including training up other team members.

Although we don’t have space to highlight all of our 2022 award-winning projects here, we congratulate each and every one of our 98 awardees on their success! More details of all 23 projects can be found on the Latest Projects page of our website. 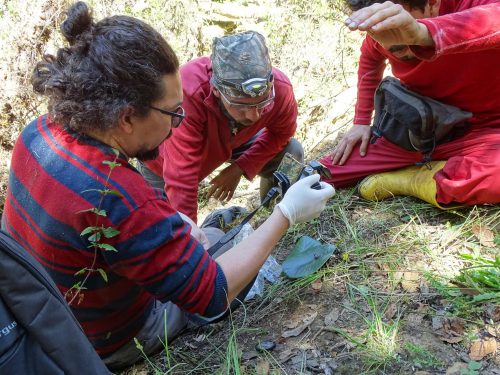