CLP at the Tusk Awards ceremony: A celebration to remember

Earlier this week, Conservation Leadership Programme (CLP) alumna, Julie Razafimanahaka, was named as the winner of the Tusk Award for Conservation in Africa 2021, which was presented to her by Tusk patron, HRH Prince William, the Duke of Cambridge.

I felt honoured to be able to represent CLP at the Tusk Awards ceremony, which was held in-person at the British Film Institute in London on Monday 22 November. Two of the three finalists shortlisted for the Tusk Award for Conservation in Africa 2021, Julie Razafimanahaka and Dr Caleb Ofori-Boateng, were CLP alumni, and I had nominated both of them for the award.

I arrived at the venue among the sparkling Christmas lights, brimming with excitement. Not only was there a good chance I would witness one of our alumni win a prestigious conservation award, but I would soon get to meet them in person!

Sure enough, I managed to speak to Julie just before the ceremony began. I was slightly star-struck. When nominating her back in March 2021, I had been blown away when I discovered the huge extent of her efforts to conserve Madagascar’s endemic biodiversity, over almost two decades of her life.

Having first joined the CLP alumni network in 2004 as a research student on a Malagasy bat project, Julie had become the Director of a national NGO just seven years later, going on to lead the formation of no less than seven protected areas in eastern Madagascar. She had also spearheaded the first conservation strategy for the country’s iconic baobab trees, securing the management rights of over 10,000 ha of baobab forest that had been previously completely unprotected (among many other impressive accomplishments).

I’d nominated Caleb for many of the same reasons as Julie; a decade of dedication to saving Ghana’s threatened amphibians had affirmed him as a truly outstanding leader in the conservation world. His team’s research has resulted in the discovery of several species new to science and the rediscovery of populations that were thought to be extinct, including the Critically Endangered Togo slippery frog.

Caleb’s links with CLP dated back to a 2010 Future Conservationist Award, having subsequently won CLP Continuation Awards in 2013 and 2021, along with a 2019 Whitley Award and other small grants, which had helped him scale up his research and conservation efforts to include local community engagement and mentorship of young conservation leaders.

And the winner is…

As the three finalists ascended backstage to meet with Prince William before the ceremony, I made my way into the auditorium with at least a hundred other guests. I was almost bursting with anticipation. I was honoured to sit next to Caleb and Ghana’s High Commissioner, His Excellency Papa Owusu-Ankomah. We watched as Suleiman Saidu, a senior game guard ranger at Yankari Game Reserve in Nigeria, received the Tusk Wildlife Ranger Award from Prince William in recognition of his efforts cutting elephant poaching down in the reserve to just one case since 2015.

Then it was Caleb and Julie’s turn in the spotlight. As I watched the beautiful films produced by Tusk about each shortlisted nominee, I discovered more about the third finalist, Rachel Ikemeh, founder and Director of the SW/Niger Delta Forest Project. She was a force to be reckoned with: a woman of grit, with no formal background in conservation, who had battled against the odds in an extremely dangerous and challenging environment to establish two protected areas and save threatened primates, including the Critically Endangered Niger Delta red colobus monkey.

Who would win the award: Julie, Caleb or Rachel? It was impossible to call.

When Julie was announced as the winner, her face lit up with astonishment and happiness. Up on stage, Prince William presented her with a specially designed award crowned with a silver golden mantella frog – one of the many Malagasy species facing a brighter future thanks to Julie and her team.

In her moving acceptance speech, Julie referred to a Malagasy proverb:

In her speech, Julie likened herself to the tree, and the soil to her family, friends, colleagues, funders and other supporters. She added: “This Award is a reward for all our efforts, and an incentive to continue further and better.”

After the ceremony, Julie visited the CLP team and other colleagues at the head office of our partner, Fauna & Flora International (FFI), in the David Attenborough Building, Cambridge Conservation Initiative headquarters.

Showing me her Tusk Award with its intricately carved silver frog, I asked her about the Malagasy proverb she’d mentioned in her acceptance speech. She explained: “In Madagascar, canoes are very important as we don’t have many bridges! You can only make a canoe from a certain tree; it has to be the right species, the right size. But the right tree will only grow when it’s rooted in the best soil.”

As CLP and its partners – FFI, BirdLife International and Wildlife Conservation Society (WCS) –  celebrate Julie’s outstanding achievement, we also thank Tusk and its sponsors for recognising and rewarding her, Caleb, Rachel, Suleiman and Simson Uri-Khob, winner of the 2021 Prince William Award for Conservation in Africa, and many other inspiring conservation leaders for their extraordinary efforts protecting Africa’s natural heritage.

Watch highlights from the live awards ceremony and behind-the-scenes interviews:

About the Tusk Awards

For over 30 years, Tusk has worked to build a sustainable future for the African continent and its wildlife. Since its formation, Tusk has raised over $100m for a wide range of projects, which not only work to protect wildlife, particularly endangered species, but also help to alleviate poverty through sustainable development and education amongst rural communities living alongside wildlife.

HRH The Duke of Cambridge became Royal Patron of Tusk Trust in December 2005 and he has actively supported the charity’s work both privately and publicly on many occasions. The Tusk Conservation Awards, which were devised with the personal input of The Duke, were first held at the Royal Society, London, in September 2013.

The Prince William Award for Conservation in Africa is a lifetime achievement award given to a distinguished individual for their outstanding dedication and exceptional continued contribution to conservation in Africa. The award comes with a Tusk grant of £100,000 over three years.

The Tusk Award for Conservation in Africa, sponsored by Land Rover, is for an individual who is judged to be an emerging leading conservationist, in recognition of their outstanding success shown in their chosen field. This award comes with a Tusk grant of £75,000 over three years.

The Tusk Wildlife Ranger Award gives international recognition to the dedication and commitment of an individual who works in the field to protect Africa’s wildlife. The award is being sponsored by the Nick Maughan Foundation. The winner receives a Tusk grant of £30,000 over three years 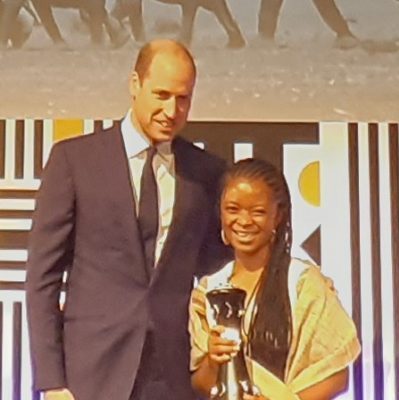