This article was originally published on the Fauna & Flora International (FFI) website, and can be found here.

Frogs have been around for about 140 million years, since dinosaurs roamed the Earth, and are found in most moist corners of the world. IUCN has assessed 6,340 species of these tailless and smooth-bodied amphibians, and almost one in ten of them are classified as Critically Endangered.

Declining populations due to an invasive fungus, habitat loss, hunting pressures and climate change have caused broad concern among experts that a mass extinction is under way, with at least another 7% of all frog species expected to be lost within the next century.

Although this makes dismal reading, there are positives to be found. Conservationists supported by the Conservation Leadership Programme (CLP) have made great leaps towards protecting some of the world’s most imperilled and impressive anurans. Below we travel across three continents to find out how these frogs are faring.

Slipping through the cracks

In West Africa, the Togo slippery frog has a rather unexceptional appearance that belies its significance as a species. One of the most genetically distinct and endangered animals in the world, this unique frog started to evolve separately from other amphibians five million years before the extinction of the dinosaurs.

After a 40-year absence that led many to believe it had been lost to the world, the Togo slippery frog was rediscovered in 2005. Yet, it remains on a precariously slippery slope to extinction. As a result of intensive hunting and loss of suitable habitat, only an estimated 250 mature individuals remain in the wild.

People seldom stand up for frogs in Ghana as they are believed to bring bad luck. Thankfully, there are exceptions, including the first formally trained herpetologist in the country, Dr Caleb Ofori-Boateng. Throwing social acceptance to the wind, Caleb and his team have spent a decade undertaking vital work to conserve Ghana’s amphibians, including the Togo slippery frog.

In 2010, Caleb led a CLP-backed project to uncover some of the first formal estimates of the frog’s population size and generated renewed interest in its conservation among local people. Three years later, Caleb and his team uncovered vital – if alarming – information on the species’ distribution. Instead of being found in two sites, as previously thought, this particular species occurs in just one isolated site along the Ghana-Togo border: the Togo-Volta Hills.

Together with other amphibian aficionados, this team has developed initiatives to help conserve endangered frogs in the region. In recognition of their achievements, this year, CLP has awarded this team its top grant, enabling Caleb and his colleagues to expand their conservation work into neighbouring Togo.

Hiding in a hostile home

On the Somuncura Plateau in Argentinian Patagonia, about 1,000 metres above sea level, temperatures can plummet to a nose-numbing -20°C and the wind can blow at speeds of up to 60 kilometres per hour. You would be forgiven for thinking that no frog could survive in such a harsh place.

And yet, the El Rincon stream frog has found a way of adapting to life here. Quite sensibly, it spends its life in a stream that is heated by thermal springs, where the temperature is a much more hospitable 19°C.

However, limited management within the Somuncura Provincial Reserve meant that this vital habitat had been largely unprotected for decades. This frog was facing a forlorn fate that would have gone unchecked had it not been for the intervention of a team of conservationists led by Federico Kacoliris at the Wild Plateau Initiative (now the Somuncura Foundation).

In a project funded by CLP in 2013, Federico and his team were the first to uncover the true extent of the threats to these frogs. They found that predation by invasive trout has restricted the species to one isolated area, with only a handful of decimated subpopulations clinging to life in this tiny corner of Patagonia. Even there, dams and livestock encroachment are devastating its unique habitat.

The team has already instigated ways to protect the frogs, including a government-endorsed action plan to manage trout and livestock as well as reintroductions of captive-bred frogs to bolster wild populations. And, seven years after the first project, CLP is again supporting the team to build on its vital work to save the species.

The Mount Gede Pangrango National Park in West Java, Indonesia, possesses an impressive bonanza of natural wonders. Designated a UNESCO Biosphere Reserve almost half a century ago, the 150km2 park is centred on the twin volcanoes, Mount Gede and Mount Pangrango, and boasts montane and subalpine rainforests harbouring a rich biodiversity.

Despite this being a renowned hotspot, the frogs here remained a mystery for decades, until 2004, when a CLP-backed project led by Dr Mirza Kusrini conducted the first amphibian inventory in the park – and indeed in West Java – since the 1960s, providing updated insights into their conservation status and the key threats they face.

During the survey, the team identified 18 different frog species in the park, which is about half of the total number of species present in the whole of Java. These included three species that had not been previously recorded.

They also discovered that numbers of the bleeding toad (an endemic, globally threatened species) had crashed in the park since the 1960s survey. As the cause of this decline was unknown, a follow-up study set out to uncover whether the bleeding toad and other endemic frogs in the region were susceptible to the potentially fatal skin disease, chytridiomycosis, caused by the invasive fungus Batrachochytrium dendrobatidis or chytrid fungus.

Out of the 18 species of frog found in the Mount Gede Pangrango National Park, five were found to be infected with chytrid fungus, including two endemic species: the Java flying frog (main photo) and the bleeding toad. This was the first evidence that the deadly fungus had reached Asia, a continent where it had previously been thought to be absent.

Based on these and subsequent projects, intensive monitoring and public education campaigns about frogs in this region were instigated. This led to increased public interest in amphibians and, following a formal request from the Indonesian Herpetological Society and the Indonesian Institute of Science, the government granted protected status to the critically endangered bleeding toad.

In the 35 years since it was established, CLP has granted more than half a million dollars in funding to over 40 amphibian projects and delivered leadership training to early-career conservationists working directly to understand and overcome threats to this diverse and vulnerable group of animals. In the coming years, the CLP partnership, with support from Arcadia – a charitable fund of Lisbet Rausing and Peter Baldwin – will continue supporting early-career conservationists in their vital actions to save endangered frogs and other threatened species. 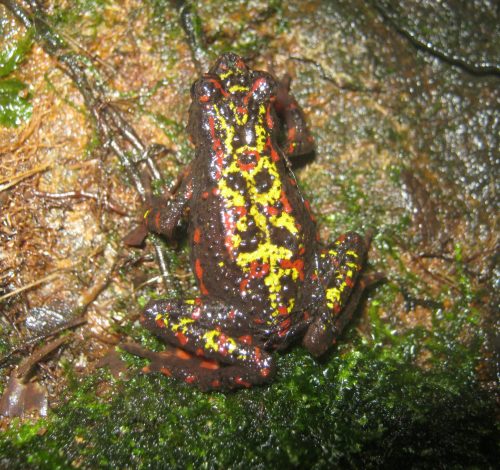